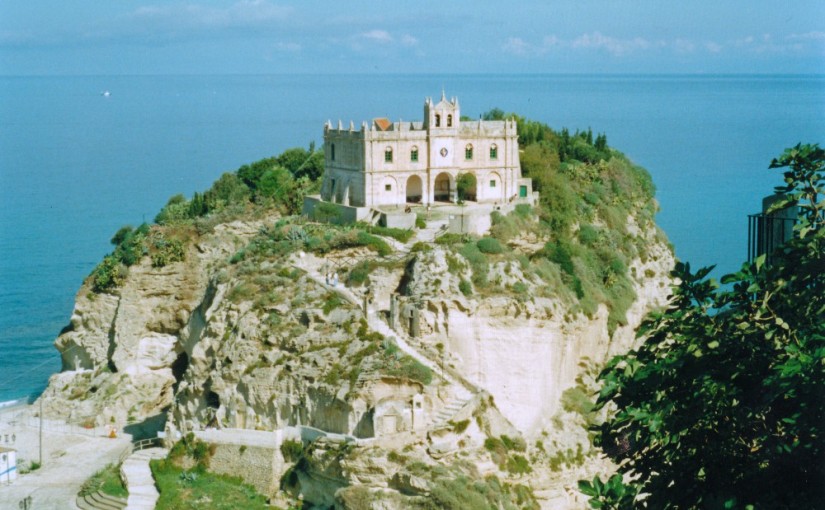 A few years ago my adult daughter decided that it would be nice for us to spend a few days somewhere warm around my birthday (October), and share some “mother and daughter” time. She tried searching on the ‘net for a cheap break away in southern Europe, but became frustrated when time after time she reached the final page only to find that the holiday was unavailable on those days or for that price!

Eventually we decided to take pot luck and take a cheap flight from Stansted airport to Lamezia Terme International Airport with Ryanair. No, neither of us had heard of it either. The airport is located ten minutes outside the town Lamezia Terme in the boot of Italy so we figured that from there we should be able to go to the Calabrian coast and find somewhere warm to hang out in for a few days. Armed with a small bag each containing not much more than a change of underwear, some lire, a toothbrush and an Italian phrase book, off we went.

Arriving at the Italian airport we thought it would be easy to find someone in the terminal who spoke English and who could direct us to a nice hotel on the coast. Wrong. Not only did there appear not to be an information desk, nor did anyone speak English. Out came the phrase book. After much pointing and tentative attempts at speaking Italian, we finally decided upon a little place called Tropea on the coast where we led to understood we would easily find somewhere to stay. We were given a phone number of a small hotel and directions to get there by catching a bus and two trains. It meant changing in Rosarno, otherwise we’d end up in Villa san Giovanni, the terminal to Sicily!

We caught a local bus to the town of Lamezia Terme and found the railway station where I purchased two tickets to Tropea and even managed to work out from a very complicated diagram which platform the train would depart from. We headed to Platform 3 and waited …. and waited …. I headed back into the station to confirm that we were indeed waiting on the correct platform. We were, but it appeared that the train was running late. We were a little concerned as by now it was getting quite late and at this rate by the time we arrived in Tropea everything would be closed.

Eventually a train arrived and on we got. Our seats were reserved so we made our way to our seats in one of the old-fashioned corridor trains with separate compartments (think “Orient-Express“) and found ourselves in with an Italian couple and another English guy who was heading over to Sicily. Our main fear was in missing the stop at Rosarno as we couldn’t see very much from on the train and many stations seemed to be unlit. Still if we did miss it, we could always carry on to Sicily: it would be as good a destination as anywhere else.

Rosarno was one of the larger stations though and well-lit. We said “ciao” to our new friends and went to find out where the train to Tropea left from. Fortunately we didn’t have to wait long, but even so it meant that we arrived in Tropea at close to midnight. Hoping for a taxi outside the station, we were once again disappointed. Nothing. No taxis, no signs and no staff on duty. Sighing we went back into the station to look for a telephone followed by what could only be the town drunk on his bicycle – don’t ask me how or why it is that we always seem to attract the town drunk, but we do! A most bizarre conversation took place with him slurring away in Italian and my daughter telling him to get lost in English. I left them to it.

Getting through to the hotel on the number we had been given was not a problem, communicating with them was, as no-one spoke any English. Trying to decipher what the person on the other end was saying and then looking it up in the phrase book was a slow process. Finally we understood that the hotel was full, but the manager would send a taxi to pick us up and take us to another place with a room. At this point we were trying to fix a time and the chap kept repeating “ora” which I thought meant hour so I kept on repeating “dodici” (12 as in midnight). Found out later that ora also means now!! Duh!

We were picked up to find that the town centre was only about a ten minute walk away (but it was pitch black outside the station and we had no idea of the direction the town lay in from the station) and we were taken to an Irish Bar / Nightclub which apparently had rooms on the second floor. On being given a double room, we made several trips back to reception armed with phrase book to ask for items such as “blanket” “toilet roll” and “check-out”? It wasn’t five stars, but it was very cheap!

Finally we fell into bed, long after the witching hour, and lay there listening to the boom, boom beat of the disco below and the rhythmic thudding of a bed against our wall, completely out of sync, accompanied by various gasps and groans. After 15 minutes of this, in silence and embarrassment, we both suddenly yelled out in stereo “for goodness sake get on with it”, and broke into waves of hysterical giggles. Needless to say we didn’t bother going to bed until at least 2 a.m. on the following nights.

PS Our Italian did improve over the course of the next 5 days (well it had to really) and we also learned that German was widely spoken (lots of German tourists there) so were able to get by a bit with that. I got quite used to going into a nearby coffee shop every morning and ordering a “un tè con latte e un caffè nero” only to discover on the last day that the owner did speak some English when he greeted me with “Good day, would you like the usual?” I must have kept him amused all week with my hesitant Italian.

5 thoughts on “An Italian Adventure: when spur of the moment decisions lead you into the unknown …”