After Addo we retraced our steps along the Garden Route towards Cape Town deciding to stop over at another place I have always wanted to visit, primarily because I love the name Tsitsikamma National Park.

Tsitsikamma is a khoi word meaning “place of abundant or sparkling water” and the beautiful indigenous forest protected by the State, is home to centuries old trees such as Yellowwood, Stinkwood, Hard Pear, Ironwood, Kamassi and many others.

Of course those ofyou who are extreme sports fanatics (you know who you are) will no doubt of heard of this region as it is famous for the world’s highest bridge bungee jump from the dizzying Bloukrans Bridge on the old road, zip-lining through the canopy of the trees or going down the Storm’s River itself on a rubber tube! It is well-known for the Otter trail a spectacular trail between Nature’s Valley and the Storm River and many other hiking trails in the Tsitsikamma Mountains amongst mountain fynbos and indigenous forests with wonderful river gorge and mountain scenery. There are plenty of rivers, streams and rock pools for swimming and swinging rope suspension bridges slung near the waters for walkers.

“J-BAY”
After leaving Addo by the Colchester exit we joined the N2 and drove east past the Sundays River. The San people originally named this river Nukakamma (Grassy Water) because the river’s banks are always green and grassy despite the arid terrain that it runs through. It looked a very pleasant spot to visit, but I wanted to pop into Jeffrey’s Bay – a long time favourite surf spot in the 1970s.

On entering Jeffrey’s Bay from Port Elizabeth you drive along the Kabeljous Estuary and Nature Reserve which is a walk-about reserve and has a safe swimming beach. It is an excellent fishing and bird-watching area so it’s probably worth staying near ‘J Bay’ for this alone. The Noorsekloof Nature Reserve (near the golf course) has a 3km trail running alongside a stream from which you can see many species of bird and some small buck and if it is bird-watching you are after then the Seekoei River Estuary, as you enter the main town, is the place to go. There is an abundance of water fowl and a hide overlooking the river.

“J-Bay” as it is known to the locals, brings to mind surfing, sunshine and beautiful beaches – and you’d be right. Home to the Billabong Surfing Festival every July and rated among the ten best surfing spots in the world, surfers from across the globe come to enjoy the rolling breakers. As often happens I was disappointed with what I found there. It does have a lovely long and sandy beach, though at the time of our visit a distinct lack of surf, and therefore a deficit of surfers. There is apparently a Surf Museum and a Shell Museum which unfortunately we didn’t know about at the time as they would have been intriguing to visit.

All I saw was a depressingly long Main Street lined with identical shopping malls and boring holiday resorts. On reflection after the open wilderness of Addo all these signs of humanity were a little bit too overwhelming at the time. 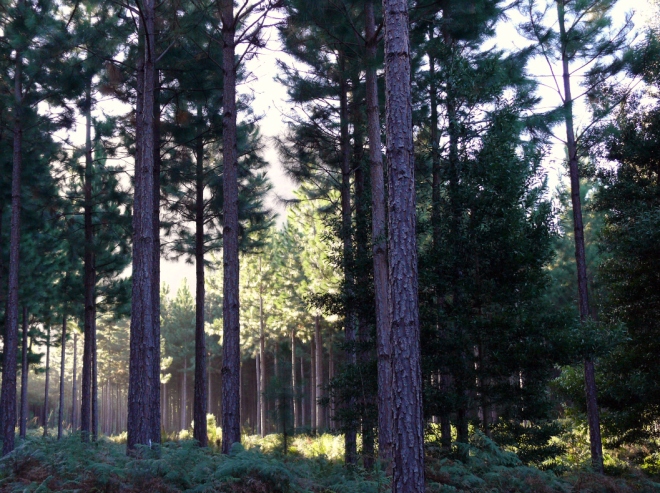 We continued onto the R102 to Humansdorp before re-joining the N2 and making our way to the Tsitsikamma Lodge where we had booked a delightful log garden cabin complete with spa bath!  Slightly more luxurious than the rondavel  in Addo. 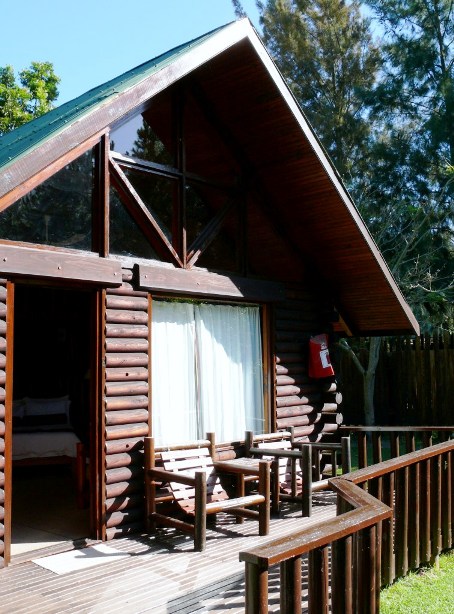 It felt good to be sitting outside on the private deck having a couple of Castle lagers and updating my travel journal before heading off for a stroll in the beautiful surrounding forest. 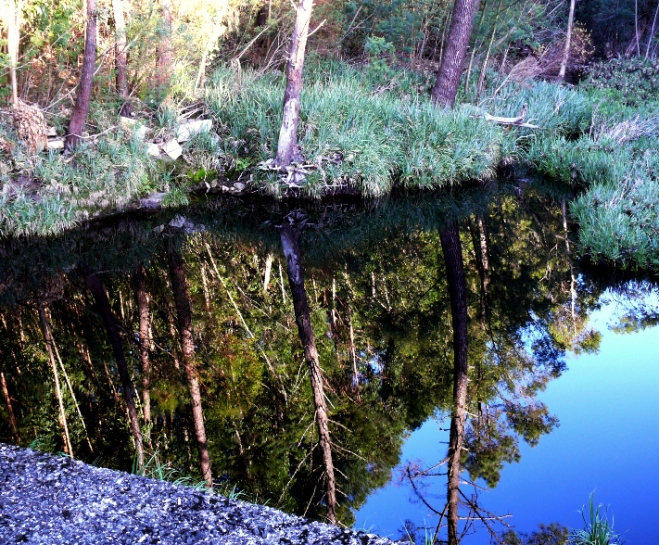 Dinner at 7 p.m. that night was in the lodge restaurant – a set menu – broccoli soup followed by fish and salad, roast leg of lamb and seasonal vegetables, desserts and cheese and biscuits. We didn’t quite make it to the end and were in fact in bed by 9 p.m.

Nature’s Valley
The following day we headed out to Nature’s Valley, the plan being to make our way back to the lodge from there stopping at various sites. Unfortunately we had to go along the N2 and therefore through the toll plaza between The Crags and Storm River as there was no alternative route due to the R102 being blocked by the flooding in December (remember the tjoe-tjoe?). Chris from the lodge said that the problem was that local government was waiting for the national government to declare it a disaster area so that they will pay for it. Meanwhile until someone decides who has to pay for the repairs nothing is done!

Nature’s Valley is incredible – far nicer than Jeffrey’s Bay – in my opinion. Wide, white sands, a safe lagoon for swimming and all in peaceful, natural surroundings. No shopping malls and no garish developments, just a small community with one pub/shop/restaurant at the far end and some local pink-bottomed baboons!

This is one end of the otter trail which is considered to be one of the best trails in the world. It is not an easy trail; it is 42.5 km long and takes five days to complete. It follows the rugged coastline and cliffs returning to the shore line to cross rivers. Many years ago my sister-in-law did the trail and considered it one of the best things she ever did in her life. Sadly I have not done it and probably never will now given the steep descents, difficult river crossings and dangerous rock scrambles. We ventured a little way along the Salt River Walk which starts from the shop at Nature’s Valley and is around 9 km long. It takes a circular route along the beach and into the scrub forest.

We followed the route in the opposite direction, along the beach until it wound up into the bush and became too steep to continue. I often get quite annoyed with myself at not being able to do the things I took for granted thirty years ago. Joints too stiff, overweight and under-fit, nervous of slippery slopes and sudden drops are the curses of becoming older and spending too much time working on computers.

On the way back to the lodge we drove down to Storm River’s Mouth. What a spot! Wild and windy, with huge waves crashing on the rocks, such raw beauty! There is a lovely restaurant “Tigers Eye” overlooking the river mouth and small sandy beaches – Mooibaai and Sandbaai and jewel-like sunbirds flittering in the trees. 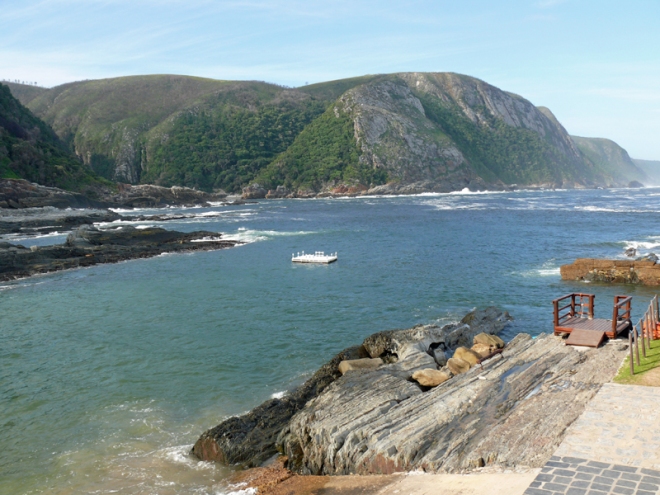 We could have taken a boat into the gorge itself, which looks pretty amazing, but getting on and off the boats looked a little tricky in the considerable swell of the ocean so we decided against it.  By the way, the ‘black water‘ colour of the Storm River is caused by tannin leaching out of plant matter; much like tea.

We wandered a little way along the Mouth Trail up to Strandloper Cave and along to the rope suspension bridge and lookout point. Unfortunately we couldn’t go onto the bridge itself because the final part of the boardwalk leading to it had been burned in a fire – it was being repaired though so hopefully open again by now. Though working on African time, you never know!

Whilst we were exploring a sudden sea fret descended turning everything into one of those eerie sets out of a horror movie – all ghostly shadows and shapes amid the constant boom of the ocean. 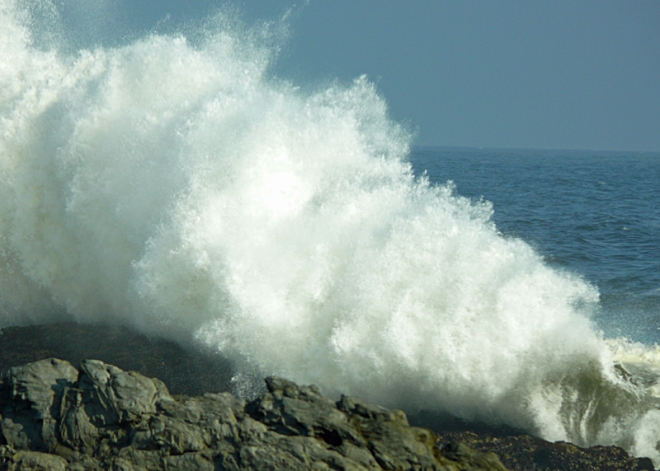 I was mesmerised by the surging waves coming in and breaking on rocks only metres away from the car with such force and incredible energy. And right next to the shore a group of rock hyrax (dassies) were having their supper. Next time I am in this region I shall book a forest cabin right on this shore. (Book through SanParks). 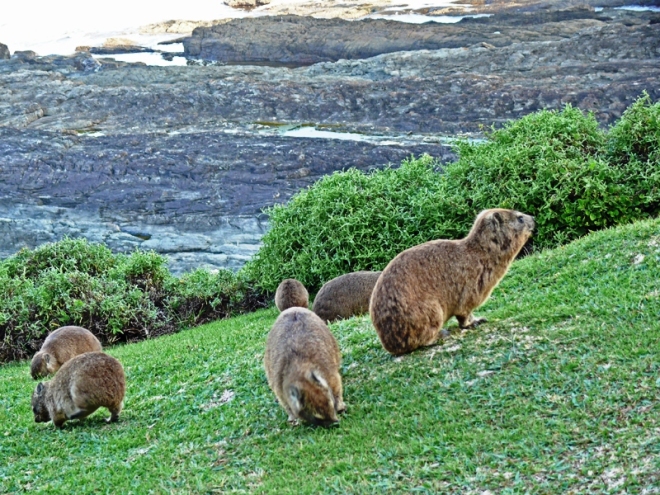 Our final stop was at Storm River Village where you can do a Fern Tree Walk, but we were all walked out by then so instead we opted to retreat to our log cabin for a very large vodka and tonic and a welcome soak in the spa bath! Luxury!

25 thoughts on “The Tsitsikamma Forest”