After a shaky start getting out of London we made good progress down to Dover where we caught a ferry over to Zeebruge. Another lift and another lorry got us to Harleen where we stopped for a couple of nights with Jon’s cousin. It was cold in Harleen in October and I was more than ready to head south. Autumn is not the time of year to be lingering in northern Europe especially as we were intending on camping along the route. Waking up with frost on the tent is no fun and the further south we headed in Germany, the colder it got. An overnight stay with another relative of Jon’s in Braunau am Inn near Salzburg gave us a break, though I shall never be a fan of sauerkraut. Best known as the birthplace of Adolf Hitler, it was not a place we wanted to stay long in. Salzburg gave us an opportunity to visit the castle, and explore the maze of tiny narrow alleys, which criss-crossed each other. The tantalising aroma of freshly roasted coffee, steaming hot chocolate and the sight of heavenly cakes and tortes made our noses twitch and our mouths water – the prices made us wince.  We spent a pleasant evening sharing a couple of beers with two Canadian lads who were lucky enough to be travelling around in a VW camper van. Unfortunately they were heading in the opposite direction to us.

A cold night in the Austrian alps found us staying in a hostel and the following night in what is now the capital of Slovenia, Ljubljana, we were forced to stay in a guest house as the weather was appalling. Hitch-hiking was slow going and eventually a train got us to Skopje where the weather was much warmer. This was an incredible 17-hour journey via Beograd and Nis through some of the most depressing countryside I have ever seen. Glimpses of bullocks pulling  ploughshares with farm-workers following behind, scattering seed by hand looked more like a Turner painting than life in the 20th century. All the while, the sky remained overcast, grey and depressing until it became dark and we could see nothing at all, except for our reflections in the grimy windows.

After a brief stop to buy bread and tomatoes we started to hitch hike out of Skopje towards the border at Gevgelija / Evzoni. We had no troubles at the border crossing and quickly picked up a lift from a lorry driver going south towards Athens, passing through Katerini, Larisa, Volos and Lamia. Unfortunately he wasn’t going all the way, but at least it was in the right direction.

Arriving in Athens felt like arriving home. I had spent some time in the city two years before when a girl friend and I hitch-hiked around Europe. Although we had mainly camped at the south of the city we had also used the youth hostels which are always bustling with people from all around the world.

Athens is glorious – hot, hot, hot and very dusty and much polluted, notorious for the nefos (smog) and the high-rise apartment blocks, built to home the thousands of refugees who arrived from Asia Minor in 1922, but I love it! Almost every house and apartment has a balcony bulging with geraniums, and many of the city’s streets and squares are fringed with orange trees. The traffic is horrendous, the noise is incredible, but it has a kind of dilapidated charm, it is so different to anywhere else I know. 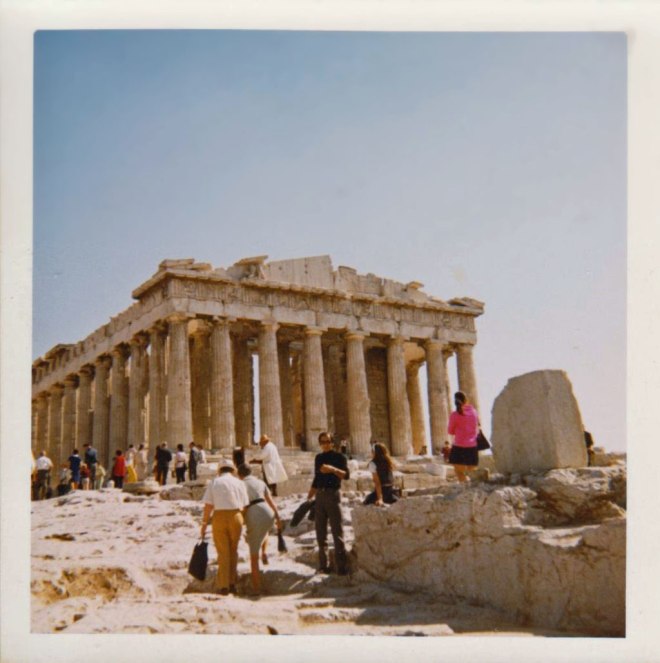 We had to visit the Acropolis and the red-tiled Plaka district which nestles into the northeastern slope of the Acropolis. This is virtually all that existed of Athens before it was declared the capital of independent Greece. Its narrow labyrinthine streets retain much of their charm despite gross commercialism. I’m happy to be back, to smell the delicious meaty aroma of souvlaki in the streets, drink the pungent black Turkish coffee, taste the creamy Greek yogurt topped with honey and feel the heat of the sun on my bare arms even though it is mid October. 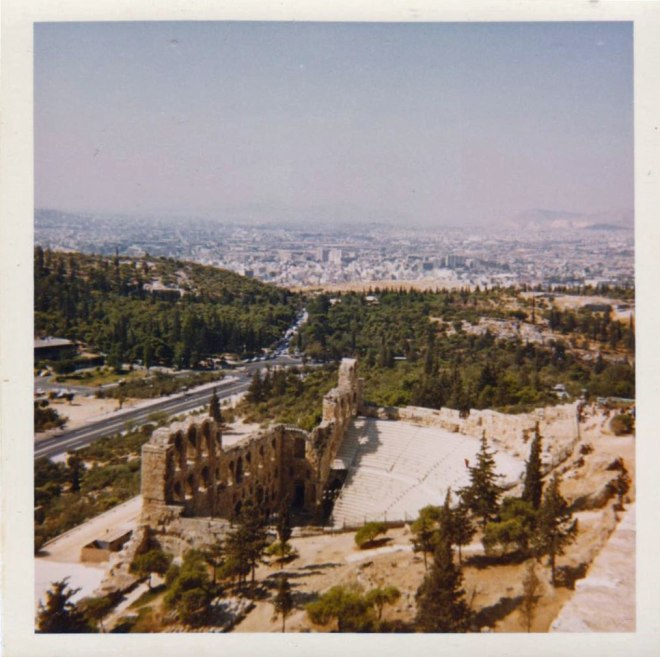 So very different to the little Yorkshire city I call home.

35 thoughts on “On Journey: Part One”