Becky’s September square photo challenge Day four!  She would like us to share photos which embrace ‘pink’ –  there could be pink in the photo, the subject or photographer could be ‘tickled pink’*, or indeed looking ‘in the pink’*.  A photo that manages to do all three things is the ultimate offering.

*‘in the pink’ means in perfect condition, or in good health, and ‘tickled pink’ means delighted.

Ailsa of “Where’s My Backpack?” is concerned about clean air and is choosing CLEAN for the theme this week. If you would like to join in with her challenge then please do. Everyone is welcome.

My personal bugbear is that of clean water. We take it for granted that we can turn on a tap and have water so good we can drink it, let alone wash in it or clean our clothes in it.  Sadly this isn’t the case in a lot of the world.

In Slovenia in the Vintgar Gorge flows some of the clearest water I have ever seen. The 1.6 km long Vintgar gorge carves its way through the vertical rocks of the Hom and Bort hills and is graced by the Radovna with its waterfalls, pools and rapids.

Discovered in 1891 by Jakob Žumer and Benedikt Lergetporer, the gorge was soon after equipped with wooden observation walkways and bridges, and was opened to the public on August 26, 1893. Wikipedia 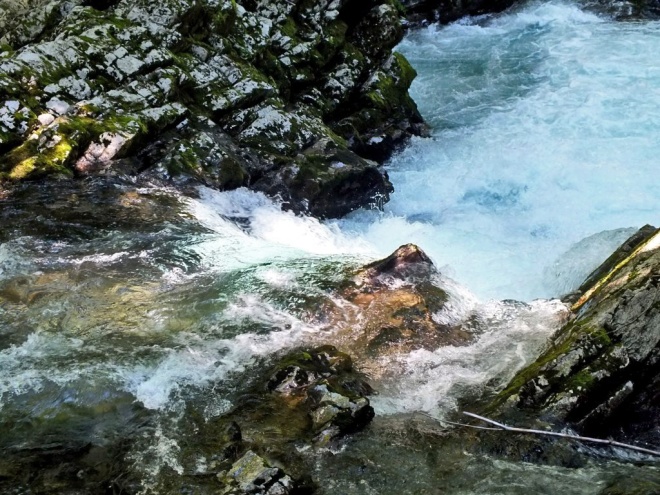 On a hot day there is nothing better than walking through this gorge in the shade with the sound of the water beside you.

Where is the clearest, cleanest water you have seen?

Bled and its perfectly formed lake located in the Julian Alps is in the Gorenjska region of Slovenia, not far from the Austrian and Italian borders. A lake just the right size for a comfortable stroll around its shores with spectacular views from all sides. We found ourselves there for a week in June 2012 when my OH attended a conference. Not far from the airport it was a quick transfer to the Hotel Golf, an ugly sugar-cube building above the lakeside, which had pluses and minuses.

The plus was a lakeside room with wonderful panoramic views. The minuses included no air-con, a steep climb back to the hotel from the lakeside, poor breakfasts and a noisy bar close-by where the natural amphitheatre of the lake basin amplified the sound. 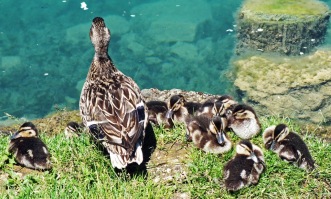 The 6 km trail around the lake is long enough to take in the views of the island with the Church of the Assumption which demands a climb up the 99 stone-step staircase; visitors should ring the bell for good luck, and a local tradition at weddings is for the groom to carry his bride up these steps. Behind the island the background is of the Karavanke mountains. The castle is perched on the high limestone mass at the north of the lake and you will see the colourful traditional Pletna boats and boatmen who will row you over to the island; swans, ducks and fish swim in glacial waters so clear you can see the bottom. There are convenient benches for you to rest and absorb the beauty surrounding you. 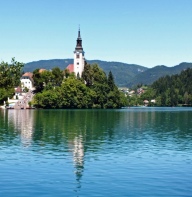 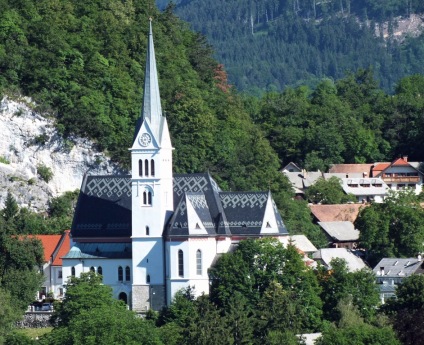 The lakeside town is charming and popular with lovely cobbled streets in the old town, plentiful lakeside restaurants serving the famous Bled cake (kremna rezina), a delicious custard and cream confection, and the lovely neo-gothic St Martin’s Church below the Castle. The castle can be reached up a steep route from the Castle beach, or slightly less tortuous routes by road from behind the Bledec hostel. The castle offers magnificent views and is an interesting medieval fortress, well worth the effort of getting there. 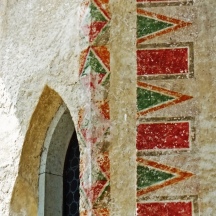 View east from the castle

When you are tired of the scenery around the lake you can visit Vintgar Gorge, 4 km north-west of Bled. A public bus will get you there and back. The 1.6 km gorge carves its way through vertical rocks and you alternate between paths and boardwalks alongside the River Radovna and its waterfalls, pools and rapids crossing over wooden bridges. It is a lovely cool place to visit on a hot day.

The Triglav National Park covers almost the entire Julian Alps and offers a completely different experience. Majestic mountains, steep gorges, clear mountain streams and traditional farms. Take an exhilarating and spectacular drive up the hairpin bends of the Russian Road to the Vršič Pass which is on the border with Italy.

Not only is it special for the views and scenery, but there is a history behind its existence. It was built by Russian prisoners-of-war in 1915 and because the road had to be kept open all year round, prisoners were kept in camps to shovel off the snow. In 1916 an avalanche buried one of these camps killing around 400 prisoners and 10 guards. There is a small cemetery near hairpin 4 and a beautiful Russian Orthodox Chapel on the site of the camp at hairpin 8. 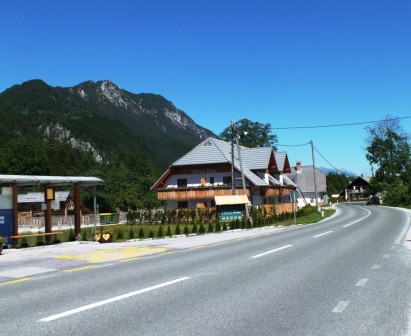 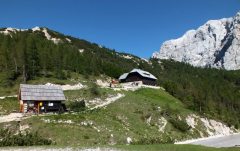 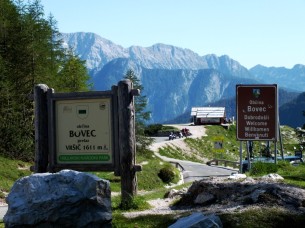 Heading down the pass