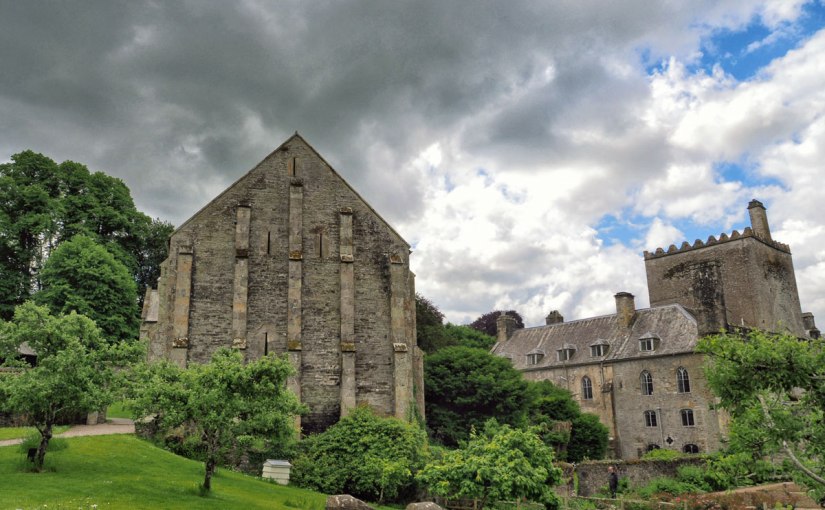 It was one of those days where you are not quite sure whether the sun will come out or it will pour with rain all day. Whilst having breakfast we watched the rain come down, but according to my phone weather app it was supposed to clear by 11 am. We took the opportunity to pop over to the famous Pannier Market in Tavistock and have a look around the stalls whilst waiting for the sun to emerge.

It was our final day in the area so we decided (well I did) to visit the lovely Garden House only a short distance away near Yelverton and since it was only an extra 5 minutes away we drove down a very narrow road (due to road closures) to visit Buckland Abbey, once home to the infamous Sir Francis Drake.

The dissolution of the Abbey in 1539 saw a new owner, Sir Richard Grenville, purchase the Abbey and some of the estate from the Crown for his son Roger. However Roger’s ownership was brief, and it was his son, also called Richard, who made many of the alterations that are still evident today. Grenville decided instead to convert the abbey church into a house, in the process creating a cosy and intimate home. He retained the church tower and inserted three floors in the church interior. 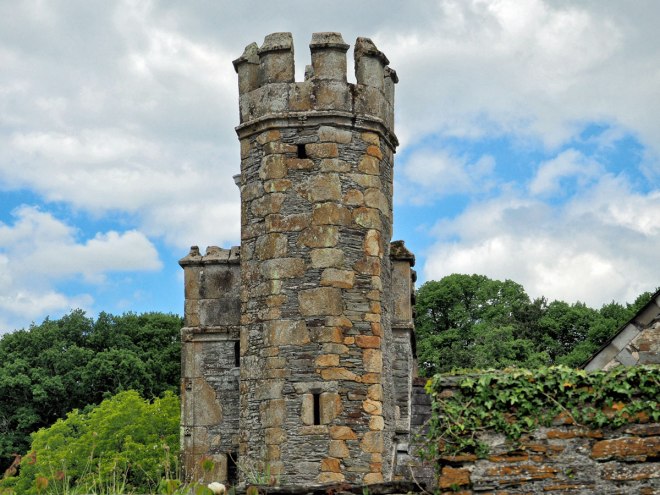 Richard decided to sell the Abbey in 1580 to Sir Francis Drake, privateer, who made it his home after returning to England after his three-year circumnavigation of the globe on The Golden Hind.  [source: NT Website]

I’m not a huge fan of NT houses, some of the history is fascinating, but there is only so much ostentatious wealth I can stomach. I much prefer the exteriors of the buildings and of course, the gardens.

Every English person over a certain age will have studied those enterprising explorers during ‘The Age of Exploration’, or ‘Age of Discovery’, including Sir Francis Drake, though his life has been somewhat sanitised (being depicted still as a ‘great British hero’) as he commanded a ship as part of a fleet bringing African slaves to the “New World”, making one of the first English slaving voyages.

Inside the former abbey the Great Hall has the original magnificent Tudor floor and an elaborate plastered Elizabethan ceiling. The upper floor has the Long Gallery which is dominated by a huge statue of Sir Francis Drake. This long, open space was used in Tudor times for the inhabitants to get some indoor exercise and we found information about life on board the ships that Drake might have sailed and the lives of the Cistercian monks. Much of the display relates to the Armada’s defeat.

In 1988 four stained glass windows were installed in the windows of the stairwell to commemorate the 400th anniversary of the defeat of the Spanish Armada.

Back on the ground floor are the Tudor kitchens, laid out with 18th century cooking utensils and foods as if preparing for the dinner party upstairs.

There is an impressive great barn which was used by the monks for the storage and winnowing of corn. Now used for apple pressing.

And outside are Herb Gardens and an Elizabethan garden in front of the abbey. Not the most interesting of NT gardens I have to say. I was disappointed with the planting of both the herb garden and the Elizabethan garden. Being the first of June I expected both to be quite floriferous. 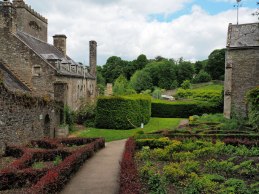 Since we were heading off to visit the nearby Garden House we opted not to do any of the walks in the grounds or visit the café.

If you are in the Mendips region of Somerset you really shouldn’t miss visiting the wonderful Wells Cathedral nor the historic town of Glastonbury, possibly the quirkiest town in England. Steeped in history, myth and the smell of incense, it may not be for everybody.

However, do not let that put you off visiting the beautiful site of Glastonbury Abbey. Since Medieval times, the abbey has held legendary status as the earliest Christian foundation in Britain linked to Joseph of Arimathea and the burial place of King Arthur. 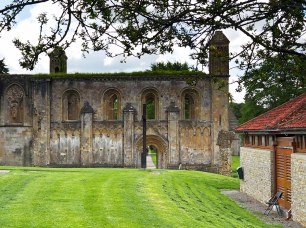 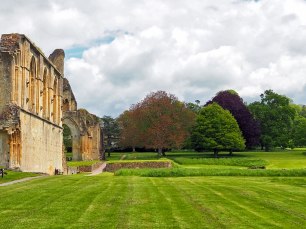 It’s a peaceful place – 36 acres of grounds to explore. Plenty of benches to sit and relax and take in the atmosphere. The remains of the abbey to walk around, which must have been enormous in its day. A medieval herb garden. Views of the Glastonbury Tor.

The abbey was built on the myth that followers of Christ settled here within the 1st century CE and built ‘The Old Church’. Abbot Dunstan remodelled and expanded the abbey and by the time of the coming of the Normans, the abbey was the wealthiest in England.

END_OF_DOCUMENT_TOKEN_TO_BE_REPLACED

Our visit to Wells last May would not have been complete without a visit to the cathedral there. One of the many that we have not visited previously and a main reason for choosing to stay in England’s smallest city. Not that either of us is remotely religious, but we can’t help admire the craftsmanship that goes into these beautiful buildings, and even I can appreciate the peacefulness that can be found inside.

Master mason William Joy  proposed the Scissor Arches (below) to prevent the collapse of a tower after a lead covered wooden spire was added in 1313. This proved to be too heavy for the foundations. Put in place between 1338 and 1348, they still stand today and are one of the most magnificent architectural features of Wells Cathedral. 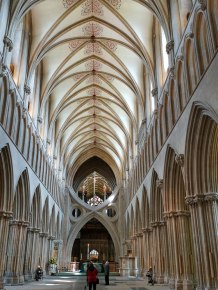 The ‘new’ church which was to become the cathedral of the Bishop of Bath & Wells was the first to be built in the Early English Gothic style, during 1175 – c. 1250.  It was built on a new site to the north of an old minster church. Over the following three hundred years there was extension and revision, in the Decorated and Perpendicular styles in turn, as architectural fashion dictated.

corbel of the dragon-slaying monk in the chapter house stair. 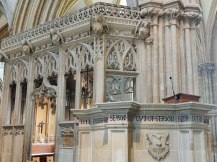 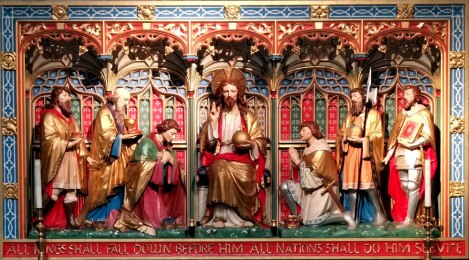 Clock and figure of Christ risen from the dead is carved in yew by E J Clack and placed here in 1956.

The famous Wells clock is considered to be the second oldest clock mechanism in Britain, and probably in the world, to survive in original condition and still in use. The original works were made about 1390 and the clock face is the oldest surviving original of its kind anywhere. When the clock strikes every quarter, jousting knights rush round above the clock and the Quarter Jack bangs the quarter hours with his heels.

With its intricately painted interior dial depicting the Earth surrounded by the sun, moon and stars, it’s unique in showing a geocentric worldview – when the clock was created in 1390, most people still believed that the Earth was at the centre of the Universe.

END_OF_DOCUMENT_TOKEN_TO_BE_REPLACED

World Photography Day is an annual, worldwide celebration of the art, craft, science and history of photography.  And this year it is the 19th August.

I thought I’d share some photos of Lacock Abbey once home to William Henry Fox Talbot, polymath and pioneer of Victorian photography, who moved to Lacock Abbey in 1827 and created the earliest surviving photographic negative in 1835, taken of a small window in the Abbey’s South Gallery. Not much bigger than a stamp! 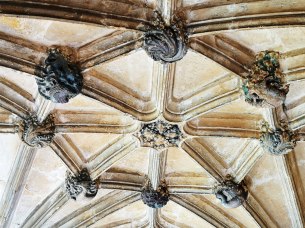 When we visited in late May only part of the building was open, including the north cloisters. I do like a cloister though this one is quite small and the light was challenging.

The Wars of the Roses

As a child growing up in West Yorkshire I knew that a friendly rivalry existed between Yorkshire and Lancashire, our neighbours on the other side of the Pennines. Later on at grammar school I learnt a little about the Wars of the Roses and was astonished to discover that it wasn’t a war between the two counties as I had believed, but a series of battles fought in medieval England from 1455 to 1485 between the House of Lancaster and the House of York.

The name of the battles derives from the symbols used by the two sides:

On moving to Ludlow a few years ago I found out that one of the major battles of these wars took place only a few hundred yards from where I now live. The Battle of Ludford Bridge 12 October 1459. The Yorkist factions gathered here to make a push into Worcestershire, but fell back when they encountered a large group of Lancastrians led by Henry VI. The two sides took up positions on the opposite banks of the River Teme, but many of the Yorkists deserted during the night and the rest retreated the next day. So a victory for the Lancastrians. It is such a picturesque spot now that it is hard to imagine a battle taking place here.