March 2013 will probably go down as one of the coldest on record. The usual cheery daffodils that dance in the spring sunshine around Mother’s Day were noticeable by their absence. My pots full of spring bulbs planted carefully in layers last September were full of frozen earth, the winter pansies and violas shrivelled and sad. A few tentative tips had pushed their way to the surface, but it didn’t look like anything would happen any time soon.

We usually take a springtime break just to cheer ourselves up after the winter which seems to stretch even longer these days, last year we went to Wales, this year we’d booked a week in early April close to Truro as it was one Cornish city we hadn’t really explored. It was also very central for both the far western tip towards Lands End and the northern edge of Cornwall close to the Devon border giving us access to practically anywhere in the county within 45 minutes.

Driving down to Cornwall you realise just how far it is from anywhere else (apart from Devon of course). The A30, slicing its way through the centre of the county, is a convenient, though boring route, lined with wind farms and nothing much to entice you to stop. We got to know the A30 pretty well in the days to come. We were fooled by the weather on the day we travelled down as it was a beautiful, sunny, cloudless day warm enough to remove the jackets during a brief stop to stretch the legs and grab a coffee in Launceston.

Arriving at our B&B within the agricultural parish of St Erme, only three miles north-east of Truro, we were pleased to find ourselves surrounded by beautiful countryside with only the clamour of nesting sparrows and finches, newborn lambs bleating and cows in the cowshed lowing softly. A few brave daffodils danced on the banked Cornish walls. And chickens ran freely around their arks in the paddock offering the promise of fresh free-range eggs for breakfast. 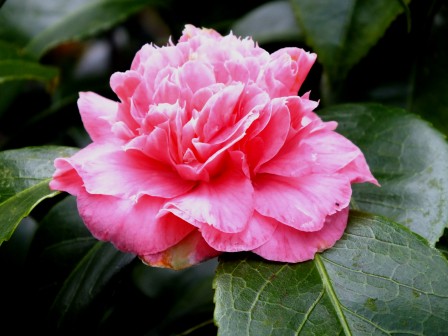 We chose April because the Cornish gardens, of which there are many, are famous mostly for their impressive displays of spring flowers, shrubs and trees. Magnificent magnolias, radiant rhododendrons, astonishing azaleas and countless camellias. Alas, even in Cornwall spring was taking her time this year and everything was at least three weeks late. Not only that but the weather wasn’t playing ball either, and instead of sun filled days with salt-laden winds and the wonderful Cornish light, we were introduced to low cloud, dense mists that obscured the landscape, heavy and sudden downpours, icy winds from the Arctic and the occasional burst of hailstones. Garden viewing, coastal walks, moor treks were completely out of the question and so we went on a house hunting tour and visited random places that we knew nothing about to ponder whether any of them could be our new home.

Sunday saw us heading to Bocconoc near to Bodmin for the Cornish Spring Show. It is quite an event for those of you who wish to purchase gardening furniture, tools, seeds, plants etc as every nursery in the county is represented there. You can also have a little wander around the grounds, but since it was cold 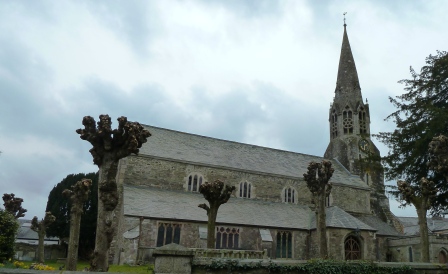 and very windy, we didn’t stay too long. Next stop was Lostwithiel, a romantic sounding place, and in all honesty quite a charming town with the River Fowey running through it, its banks clothed in daffodils. The streets form a grid pattern, originating in medieval times and there you will find many antique shops, a butcher and several cafés. Though Sunday is not the best time to visit if you want to do any shopping as virtually everything was closed. St Bartholomew’s church which dominates the town has  an unusual spire of elaborately carved granite.

Fowey itself, on the south coast, is reached by walking down steep narrow alleyways to the harbour. There is a bus which takes you from the main car-park at the top of the town to the harbour below, but this stops running at 16:00 on a Sunday. There are lots of pretty cottages, shops and pubs crowded along the narrow Fore, North and Lostwithiel streets, but all the buildings back onto the river and unlike St Ives or St Mawes there is almost nowhere you can walk by the water. Lovely views from the top of the town, but be prepared for it to be very crowded at the bottom.

Final stop of the day was Charlestown, home to tall ships and a Shipwreck and Heritage Centre. Named after Charles Rashleigh the harbour was transformed in the early 19th century. After watching the waves crashing over the harbour walls and with hands too frozen to take any more photos we headed into the Rashleigh Arms for a very good beef, ale and Cornish blue cheese pie.

The rest of the week followed a similar pattern, if we were out viewing houses we would make some time to call in to towns and villages previously unexplored.

Truro is the only city in Cornwall, its famous cathedral has three spires, though I wasn’t that impressed with it as I found it so visitor oriented it seemed to have lost its soul. Canterbury and Winchester are, in my opinion, far lovelier cathedrals. This small city has a rather confusing street pattern, a few uninteresting parks, a Pannier market and the usual range of high street shops mixed in with local businesses. In the summer ferries run on the Truro and Fal Rivers down to the Trelisick Ferry Landing and Falmouth. The best thing about Truro is its location as it is a very central base from which to explore the rest of Cornwall.

We spent a lot of time in and around Bodmin, which at first glance appears a bit scruffy, but there are some lovely granite built public buildings, a jail museum and the site of the Bodmin and Wenford Steam Railway. The area around Bodmin is quite picturesque whether it be along the Camel valley and up to Padstow on the north coast or higher up on the wild and exposed moorlands, though it is known as the wettest part of the county and the heavy rain and hailstones we experienced confirmed this.

In contrast, the Roseland Peninsula is quiet, sheltered and remote, leading to St Mawes, a bright and colourful sailing village. Above the village one of Henry VIII’s coastal castles looks across Carrick Roads to its twin on top of Pendennis Point high above Falmouth. Portscatho’s small harbour and village lying on the south of the peninsula is worth a visit with a distant view of Nare Head and the Dodman and pleasant walks. I suspect it is mainly full of second and holiday homes now, though may once have been a thriving fishing village.

Further west lies St Michael’s Mount at Marazion, a popular place to visit either by walking across the exposed causeway or by small ferry boats at high tide. Grab a cornish pasty from Philps Bakery before heading out over the beach. You won’t regret it! Marazion’s narrow main street with attractive cottages, pubs, tea rooms and arts and craft shops peters out just after the main car park and like many other small Cornish villages seems lacking in the traditional local shops that support a community.

Cornwall is quite a cross-section of towns and villages from well-known resorts like St Ives and Newquay, run-down towns like Bude, Hayle and Portreath, tiny harbours like Port Quin and Portscatho and quiet inland villages like St Erth and St Tudy. The attraction of Cornwall is the glorious landscapes of open moorland, secret coves, seascapes, soaring cliffs, river creeks, its wondrous gardens and mild climate. Well, the climate wasn’t quite so mild on this occasion, but despite the grey skies, the cold winds and the rain, Cornwall insists you sit back, relax, take stock of your life and escape from the minutiae of modern-day living.

We didn’t find our perfect home, but we now have a better idea of where to look and where to avoid. And the highlight? Seeing a beautiful white barn owl flying alongside our car in Roseland at dusk. Magic!

15 thoughts on “Just Back From… Cornwall”