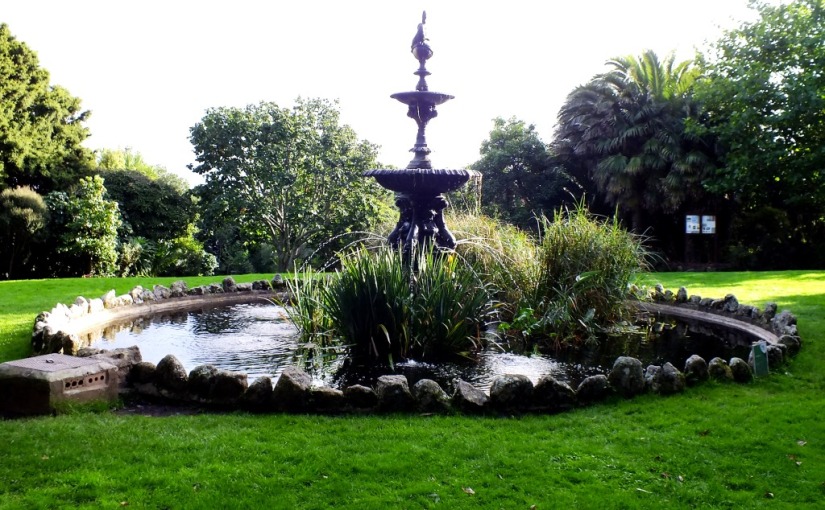 October may seem an odd time of year to visit Cornwall – notorious for its ‘mizzle’ (mist and drizzle) and when the nights are drawing in. No late evening walks along the promenade at sunset for us then. October is, however, my birth month and this year marked a special anniversary too – ten years of marriage and a BIG birthday. The one where you used to get a free bus pass and a state pension – no longer though. So where to go and celebrate these two milestone events?

I thought about romantic Florence, I considered the northern lights of Reykjavik, I mused about South Africa and my beloved Cape Town, but on the other hand we still hadn’t found a house to buy and until we settled I felt that I was in limbo. I needed to get on with the rest of my life and my heart was still set on being near the coast so what better place to return to than Cornwall. 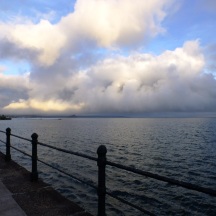 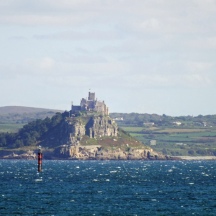 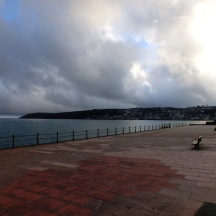 Those of you who have followed my blog may recall another visit to Cornwall in the wet and cold springtime of this year when we searched the area around Truro. On that visit we realised that we preferred the far south-western region where the light appears brighter. Seeing St Michael’s Mount makes my heart lift. Penzance on paper, appears to meet most of our requirements. My husband gets a town with music venues, transport links and his independence (he doesn’t drive). I get to be near the coast. Compromises have to be made – I can’t have my detached barn conversion with a third of an acre garden, he doesn’t get to stay in landlocked Shropshire where he already has a network of music gigs. The climate is similar to the western Cape (albeit not so warm and dry in the summer) so I can grow my favourite Mediterranean plants. Since we have only spent a day or so in Penzance before having two weeks there would enable us to really get to know this town and decide whether or not it really suits us and whether we suit it. 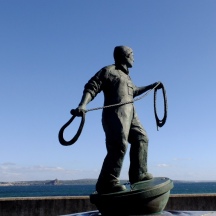 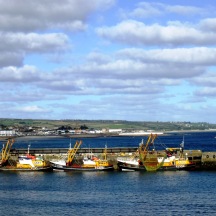 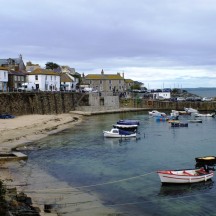 Penzance (Pens Sans – Holy Headland) began as a sheltered harbour in Mount’s Bay. The higher, level area above the harbour was the site of a market to serve the area’s growing mining community. Often in Cornwall the town is separated from the port – such as Mullion and Mullion Cove, Sennan and Sennan Cove, Mousehole (Mowzel) and Paul. With the collapse of mining, tourism began to assume a more important role in the local  economy. The Promenade was built in 1844 followed by the Queens Hotel in 1861. Tourism declined with the advent of the First World War and hadn’t really recovered by the time of WWII. In the fifties and sixties there was a boom in holidaymakers from the more affluent working classes and many of the larger Regency terraced homes became B&Bs with quite restrictive rules. Today in Penzance, along with most of Cornwall, mining, fishing and agricultural industries are in decline and only tourism and other service industries are its source of income. 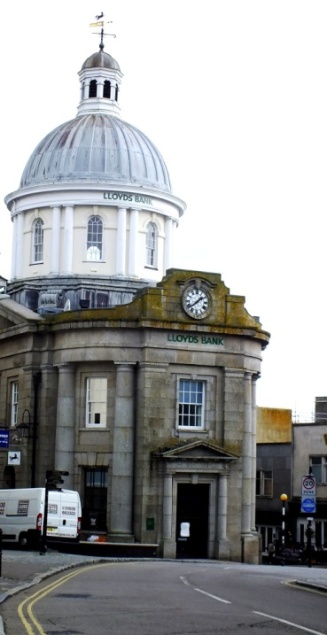 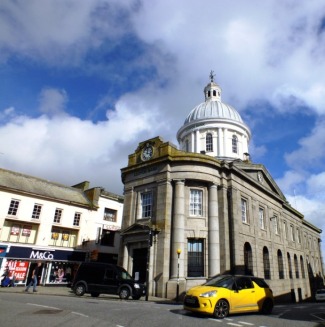 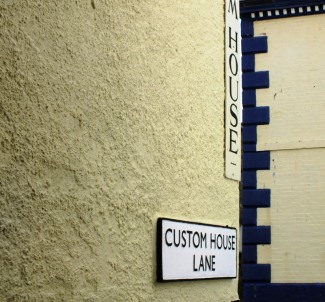 The Market House which is now Lloyds Bank was opened on the site of the previous one in 1838 and the Public Buildings (known as St John’s Hall, which is in fact within the building) was opened in 1867. A famous former resident of Ludgvan (a village outside Penzance), Sir Humphrey Davy, who invented the miners’ safety lamp is honoured in the town by a statue in front of the Market House. 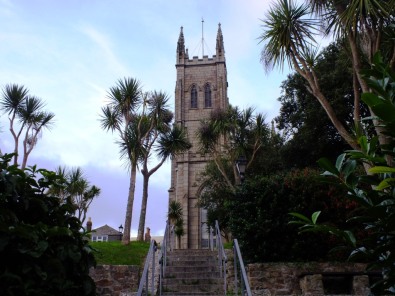 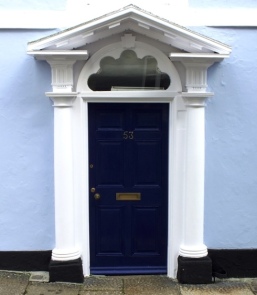 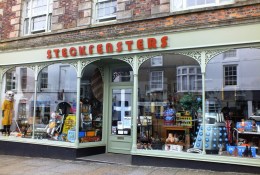 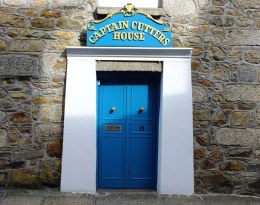 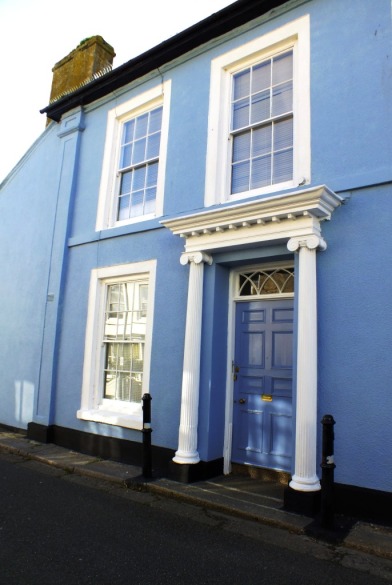 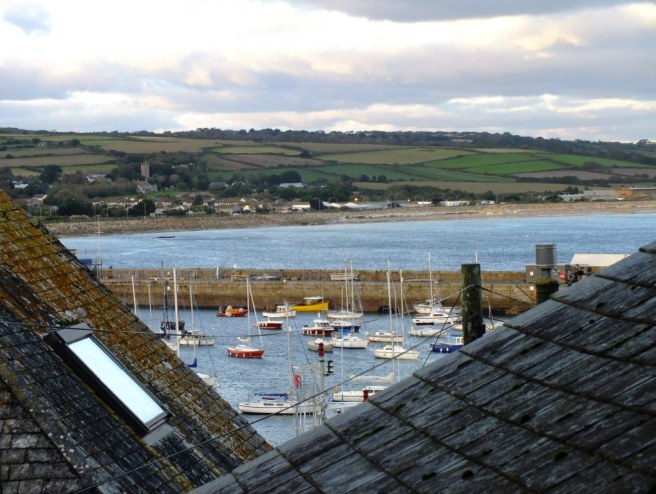 We stayed in the historic Chapel Street, opposite the imposing granite building of St Mary’s Church rebuilt on the site of an earlier medieval chapel. It was a convenient place to stay, almost in the heart of the town, but only a few minutes from the promenade where we could sit and stare at the sea or walk around to Newlyn. The house had views of the harbour, Mount’s Bay and a glimpse across to Newlyn, depending on which room you were in. The bathroom had the best view – sitting on the loo you could watch the sun rise over the harbour and the brightly painted boats  reflect in the warm golden light. When the bells rang from the church it almost felt like being in Ludlow. 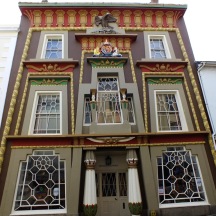 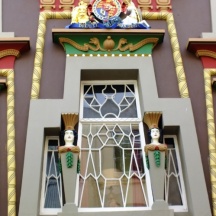 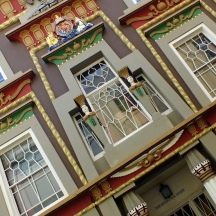 Numbers 6 -7 Chapel Street is much better known as the Egyptian House. It was rebuilt by a mineralogist John Lavin in 1835 and reflected the current vogue for antiquities and especially Egyptian. In the 1970s the Landmark Trust undertook the restoration of this building to its original brilliant colours. There are several fascinating inns on the street too, including the Union Hotel where it is believed that the news of the Battle of Trafalgar was first announced, the Turks Head rumoured to be the oldest inn in town, and the Admiral Benbow with an armed smuggler on its roof and full of wreck memorabilia. 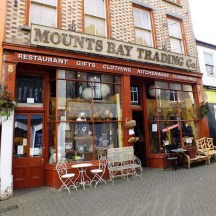 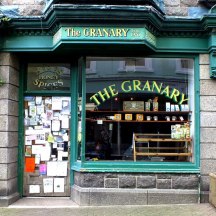 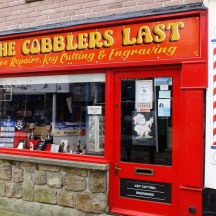 It was interesting to find that although Penzance suffers from the influx of ‘High Street’ shops such as Poundstretcher and Iceland, it does have quite an eclectic mix of independent outlets including a butcher, baker, deli and greengrocer as well as health food shops, galleries, art shops and bookshops. We were pleasantly surprised that during our stay we only went into a supermarket twice to buy milk and cereals. OK, I will confess to eating out often. It was after all a holiday and although we were self-catering, this time I wanted, no make that needed, a break from the relentless cooking of the daily meal. I wanted fresh fish and seafood, and I got them in abundance. Plus New Zealand Sauvignon Blanc – I never knew white wine could be so good. 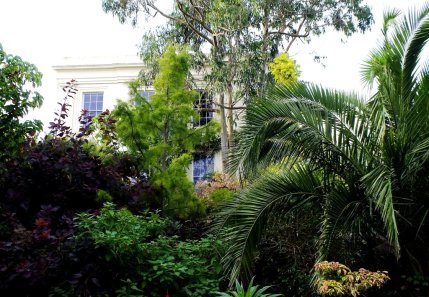 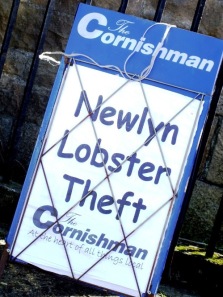 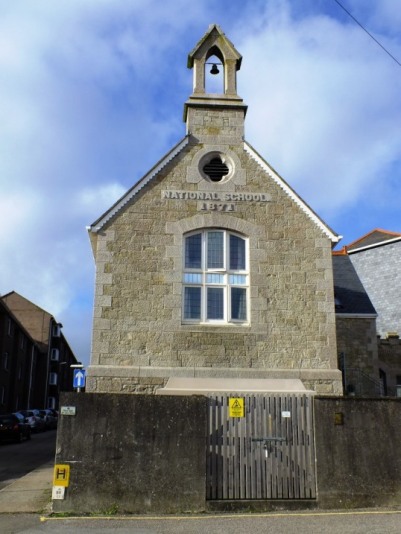 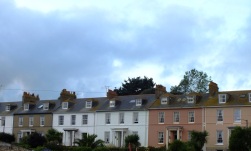 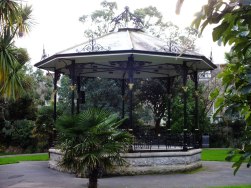 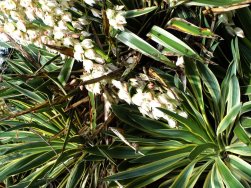 Elegant terraces in Penzance can be found to the south and west of the main street, Market Jew Street (derived from the Cornish ‘Marghas Yow’, the Thursday Market) – North and South Parade, Clarence Street and Place, Regent Terrace and Square, St Mary’s Terrace, Morrab Terrace and Place and Chapel Street. We explored them all and the granite terraces to the east of the town where five bedroom homes are for sale under £250,000. We discovered the Morrab Gardens, home to many sub-tropical plants including a variety of palms, as well as myrtles, aloes, camellias and geraniums and I was reminded of the Company Gardens in Cape Town. I could see myself here.

Penzance may lack the visual appeal of other Cornish seaports, but does have a faded Edwardian charm all of its own, and if you take the time to explore the many terraces and lanes beyond the main thoroughfare you might be pleasantly surprised by what it has to offer.

31 thoughts on “Just Back From… Penzance”