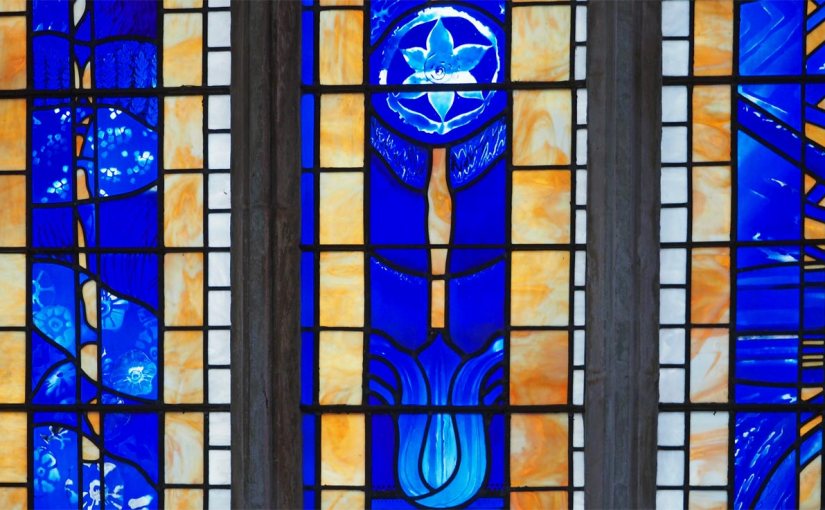 After visiting the Beth Chatto gardens it was still too early to return to Mistley Thorn so we drove down to Brightlingsea, for no other reason than to see something of the Essex coast. However, if you look closely there is often something of interest to find. Brightlingsea has the distinction of being the only Cinque Port not within Kent or Sussex. It was not taken into the Confederation of the Cinque Ports until after 1353. As a thriving ship-owning port, in becoming a Limb of Sandwich it could contribute to that town’s ship-service quota.

The town has a history of shipbuilding and seafaring. In 1347 five ships and 51 men were sent to the siege of Calais. And ‘William of Brightlingsea’ was in Sir Francis Drake’s fleet which defeated the Spanish Armada in 1588. 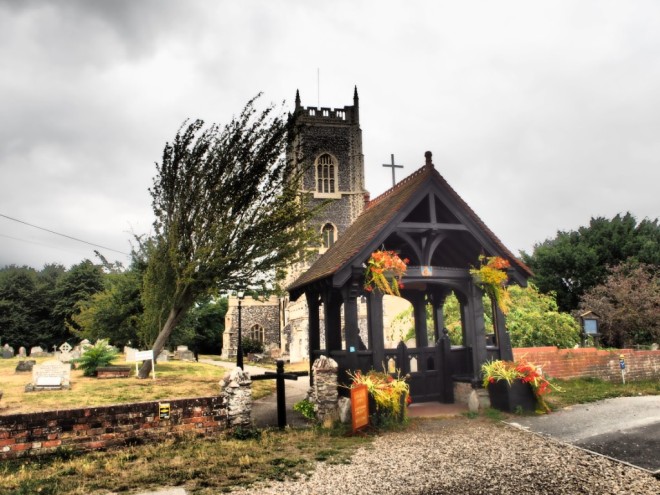 On our way in to the town we noticed a rather lovely church so decided to have a look inside on the way back.

All Saints Church, which is sited on a hill about a mile inland from the town of Brightlingsea, Essex, was mainly built circa 1250. The most striking external feature is the embattled tower, built of local flint in the last years of the 15th century.  Standing 97 ft high it is visible from 17 miles out to sea. A light was placed in the tower to guide fishing vessels home.

The Church contains some Roman brickwork and a frieze of memorial ceramic wall tiles commemorating local residents whose lives were lost at sea. In 1872 severe storms along the North Sea coast caused widespread destruction and terrible loss of life. Thirty six local seamen were lost from Brightlingsea, and this disaster prompted the then vicar Rev. Arthur Pertwee, to create a frieze of individual tiles, each inscribed with the name of the deceased and the ship on which he served. Since 1872 a tile has been added every time a Brightlingsea native is lost at sea. At first the tiles were limited to mariners by occupation, but this was altered to include anyone from Brightlingsea who lost their lives at sea. There is even a tile commemorating Sidney Siebert, who was not a fisherman, but was drowned in the wreck of the Titanic in 1912. 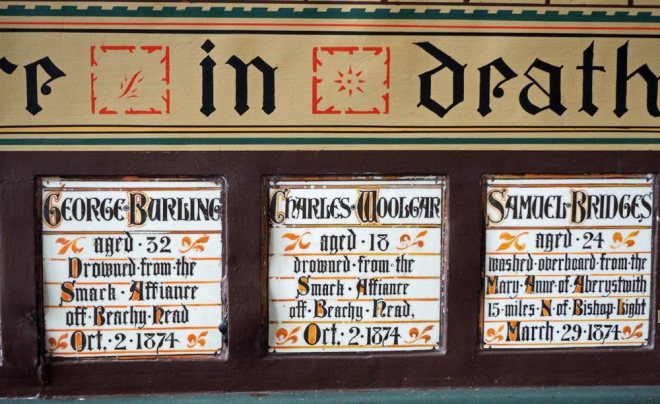 There are now over 212 tiles, each unique, each telling a story of tragic loss.

In the chancel is a very large marble memorial to Nicholas Magens (d. 1764), a German-born lord of the manor, and one of the founding members of Lloyd’s insurance company in London. Magens purchased the Brightlingsea estate only a year before his death, and his impressive monument was designed by Nicolas Read and erected in 1779. It is said to be one of the finest examples of Italianate sculptures in Britain.

Lady, whose shrine stands on the promontory,
Pray for all those who are in ships, those
Whose business has to do with fish, and
Those concerned with every lawful traffic
And those who conduct them.

Repeat a prayer also on behalf of
Women who have seen their sons or husbands
Setting forth, and not returning:
Figlia del tuo figlio
Queen of Heaven.

Also pray for those who were in ships, and
Ended their voyage on the sand, in the sea’s lips
Or in the dark throat which will not reject them
Or wherever cannot reach them the sound of the sea bell’s
Perpetual angelus.

NB: Cinque Ports
Prior to the Norman Conquest, King Edward the Confessor had contracted the five most important Channel ports of that day to provide ships and men “for the service of the monarch” and although this was frequently as a “cross-Channel ferry service”, it was not exclusively so. Under the Norman kings this became the essential means of keeping the two halves of their realm together, but after the loss of Normandy in 1205, their ships (the for-runners of the Royal Navy) suddenly became England’s first line of defence against the French. Every member of the Confederation, together with their Limbs, is situated in Kent or Sussex, apart from Brightlingsea which, as a Limb of Sandwich, uniquely lies in Essex.

21 thoughts on “All Saints Church – Brightlingsea”