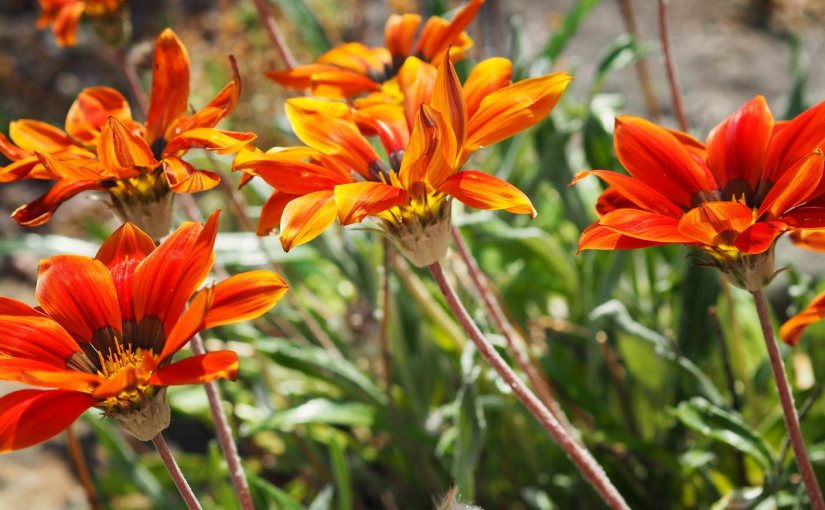 After two lovely sunny days in Lincoln we were ready to carry on northwards. Instead of heading for the A1 immediately we decided to drive through the Lincolnshire countryside via Gainsborough and Bawtry and get onto the A1 near Doncaster. A lot of this region is familiar to me as I grew up in Retford (Notts), Scunthorpe (Lincs) and then moved to Doncaster (S. Yorks) on my return from South Africa. I still managed to get confused on the outskirts of Doncaster though as many of the road routes have altered since I was last there. And then we hit an accident on the A1 and were at a standstill for about an hour!

Eventually though we were about to hit Durham, another city that although I have passed by many times I have never actually visited. My intention was to find the park ‘n ride and bus into the city, but obviously my directional awareness was totally absent on this day as I couldn’t find the site and finished up almost in the city centre where more roadworks were taking place. Heading back out of the city we eventually found the right road (it is next to the A1 but not very well signed) and caught a bus back into the city. It was a very hot day and by the time we had walked up to the castle and cathedral area we were feeling very warm!

First stop was to get some lunch and relax! We saw a nice looking café on the Palace Green and found a table outside. After 10 minutes we moved inside to get out of the heat. Now bear in mind this was mid-September in the north-east of the country!

Durham Castle – opposite the cathedral 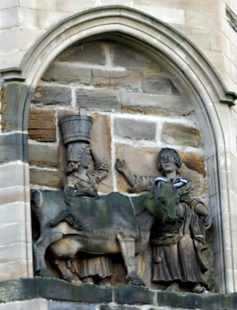 The story of the Dun Cow, as depicted in an eighteenth-century panel on the north facade of Durham Cathedral. 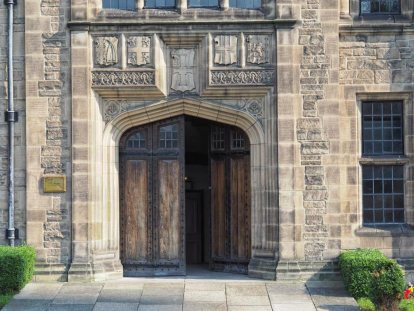 You are not charged to enter the cathedral, though a donation is suggested, and you are not allowed to take photographs inside either, which was rather disappointing. I did see a few people surreptitiously taking a few shots with their phones and a couple who had cameras were approached, rather more gently than my Lincoln experience.

I did make a few notes and sketches though:
Prior Castell’s clock – a highly decorative wooden clock; the shrine of St Cuthbert; huge pillars carved in a diamond or chevron pattern in the nave; coloured marble floors and a lectern stand with pink and green marble pillars and heraldic lions at the base. Inserts of patterned marble and bands adorn the upper columns. Shrines with traces of the medieval paint in red and blue… Lindisfarne Gospels

On entering the cloisters, where the monks would have once passed daily on their way to the Chapter House, the Monk’s Dormitory, Scriptorium, Refectory and Great Kitchen, I decided the photography rules no longer applied. The shadows on the stone slabs were far too tempting and how could I resist the flat wooden ceiling with shields at the intersections of each cross beam and the golden angels near the Chapter House.

More notes: Arched shadows form on the wide stone floor as the hot sun beams down on the cloisters. Wooden pews line the walls and marks in the stonework indicate that possibly a recess has been blocked up. Maybe where the monks stored their books? A pipistrelle bat flies down the passageways and surprises me – I have never seen one at this time of day before. Maybe the darkness in here confuses it into thinking it is dusk. Dust motes float in the air and I can almost imagine the slapping of the sandals of the monks from distant times in the all-pervading silence. 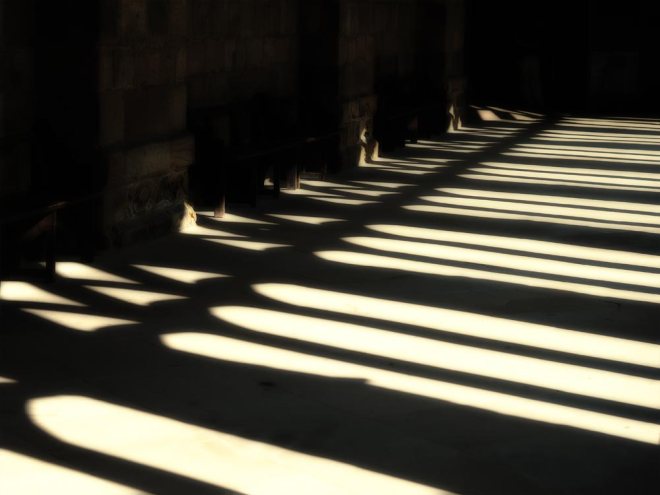 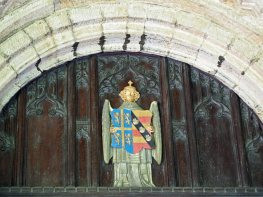 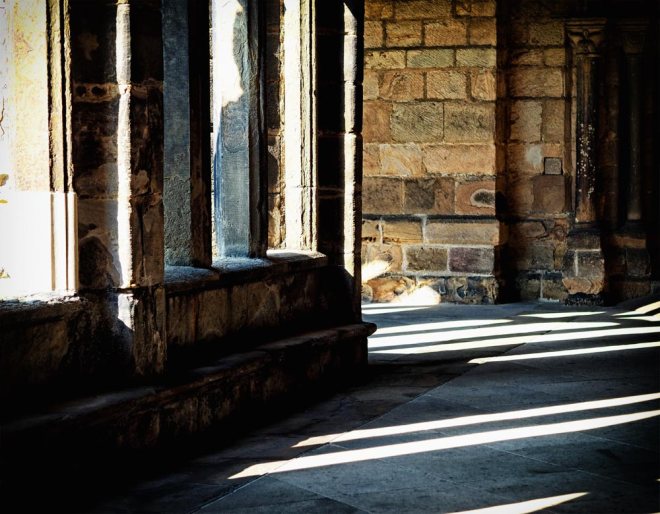 We exited the cloisters into a Memorial Garden which stands on the site of the Monastic buildings. A young lad sat peacefully on the bench studying his text book in the sunshine whilst we soaked in the colour and the beauty of the roses still flowering in September. 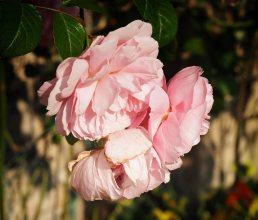 Brought back from Ypres in 1917 by Lieutenant H J W Scott 5th BN:DLI. Since then it has travelled with the Scott family from Essex to Surrey and to Cornwall. Presented to this garden of remembrance by his son Mr O T Scott. Planted on Remembrance Sunday 1978.

College Green is a quiet area on the south side of the cathedral, it has a very beautiful secluded village like quality to it, with the houses being the home to members of Durham’s Dean and Chapter. Many of the buildings surrounding the Green originated in the Middle Ages.

An arched gateway on the east side known historically as the Abbey Gates also called Prior Castell’s Gatehouse of 1495-1519 leads into the street called the Bailey. The gate is still locked each night. It has some delightful carvings on the ceiling.

The south western corner of the College is the home to the Durham Chorister School. This was originally established as a song school around 1390. Former pupils of this school have included the former Prime Minister Tony Blair and the actor, Rowan Atkinson most noted for his role in the BBC comedy Blackadder and as the comedy character Mr Bean. 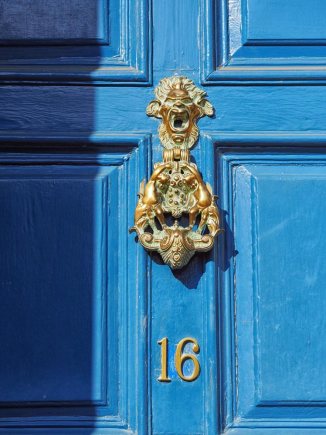 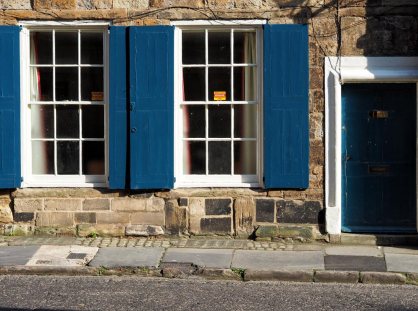 As usual, colourful doors and interesting windows caught my eye as we made our way back to the Palace Green where we could catch the cathedral bus back to the Park ‘n Ride stop.

For some inexplicable reason I failed to get a shot of the full west face of the cathedral (I have a vague recollection that there was scaffolding around some of it). To see some images of the cathedral then please visit this site.

These memorial crosses near the cathedral did manage to catch my eye. I was particularly drawn to the rather arts and crafts style of carving on the larger cross. 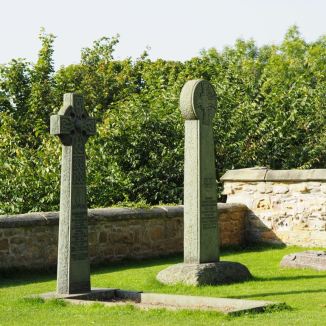 36 thoughts on “An amble around Durham’s cathedral”