Probably the most famous drive in South Africa, and certainly the Cape, the Garden Route offers beautiful stretches of coastline, lakes, mountains and giant trees. The route is sandwiched between the Outeniqua and Tsitsikamma mountains and the Indian Ocean and although extremely busy in the peak summer season, is a lovely region to visit in the autumn when the weather is still warm enough for outdoors activities, especially hiking.

George to Knysna
We joined the route at George (see Road Trip: Route 62) and made our way through the traffic to connect with the N2 from Cape Town to Port Elizabeth. After the tranquillity of the Klein Karoo, it was a bit of a shock to hit commuter traffic once again. Driving through the Kaaiman’s River Pass along the N2 to Wilderness and seeing the string of lakes I was already regretting my decision not to stay in this lovely area as it looked fantastic and an obvious spot for bird watching. Anyway, another excuse to return to South Africa. Sedgefield is the next village en route and another lovely place among the lakes and sand dunes. This whole area is quite sensational.

Knysna
We arrived in Knysna at around 5:30 p.m. staying on the Leisure Isle on the edge of the lagoon with views to the Knysna Heads. OK, so maybe this wasn’t a bad decision after all!

If you have read my previous postings about this trip, (Cape Town Revisited and Route 62), you will have realised that I am no stranger to these parts of South Africa. Though saying that, I have also only ever stopped overnight once along the Garden Route and that was in Plettenberg Bay.

I travelled along this route many times during the 1970s and 1980s on account of us living on the Western Cape Peninsula and my in-laws in the Eastern Cape. Except for a coffee and a brief stretch of the legs Knysna has always been a town that we passed through, but I have always wanted to see more of this region hence the reason to stop here on this visit.

A town that has always attracted artists and hippies as well as bird watchers (Knysna Loerie, Woodpeckers etc) Knysna has been a popular tourist spot and has grown quite a lot since the 1980s with the addition of a new waterfront complex. I was determined on this visit to actually have a chance to look around the town, and I wasn’t disappointed. After settling into our lovely B&B on the edge of the lagoon we walked to the centre of the Leisure Isle to a restaurant called “The Tides” which had an extraordinary chef. Dinner was calamari, prawns and our first Dom Pedro! We were hooked. Forget Irish coffees from now on we wanted Dom Pedros (preferably the Amarula variety), which are basically grown-up milk shakes. Seriously you have to try one.

Walking back from the restaurant we were struck by the fact that it was the first time on our holiday that we felt safe out walking at night, (this may have had something to do with the security guard at the entrance onto the island). It is not generally a good idea to walk anywhere in South Africa and especially not at night. The fantastically clear sky with millions of stars above us was stunning. A perfect end to a perfect day.

One other thing to add about South Africa is the load shedding, which means that on certain days and at specific times, there is no electricity. I can’t say that it affected us in any major way, but you have to get used to the idea that there may not be electricity when you want a shower, but hey, showering by candlelight is fun! Sometimes you may not get a cooked breakfast, and sometimes you will find traffic cops directing traffic through towns as the robots (traffic lights) aren’t operating, but on the whole it just adds to the fact that you are somewhere different. I am not sure how I’d feel if I was trying to run a business though!

A Lazy Day Around Knysna
After the effort of driving all day yesterday from Cape Town to Knysna, around 500 km, we decided to take it easy today. It started out fairly cloudy with a little bit of blue sky which disappeared over a perfect breakfast. We first took a stroll around Leisure Isle to walk off the impressive breakfast and also to see if we could spot any birds.

We did manage to snap a couple including this lovely tiny Scarlet-chested sunbird right in the garden where we were staying. We then drove into the town and to the Waterfront. We first went to the station to see if we could get tickets for the Outeniqua Choo Tjooe, the steam train that runs between George and Knysna, but unfortunately all we could tell was that it didn’t appear to have been running for a while as there were no signs of a timetable or any notice saying when the next train would be and no-one in the ticket office.

We spotted a meter lady (lots of car parks in South Africa employ parking officers who take a fee for parking as there are no self-service machines) and asked her if she knew what was happening with the train; she told us that it had stopped running because of the flood. [1] Another reason to come back – I have always wanted to do this train journey as the rails cross over the lagoon, pretty spectacular!

We went for a stroll around the Waterfront instead, which has the usual souvenir shops and restaurants (but much, much smaller than the one at Cape Town) and by this time the sun had broken through the cloud and it was pretty hot.

[1] (We later discovered that it was not running due to heavy flooding which had happened seven months ago!) 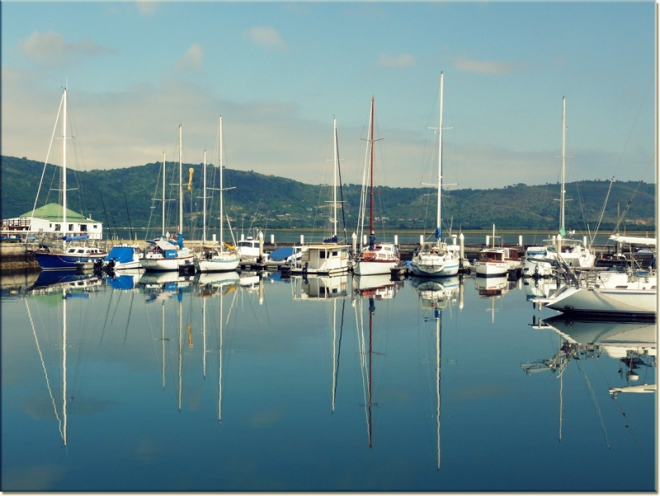 After taking some photos of the lagoon, a very noisy duck, a heron and the Waterfront, we drove to Brenton-on-Sea, a place I had never heard about, but never visited and I’m not sure I want to share it with you either! It is such a lovely place. To get there you go back along the N2 towards George, but immediately after the White Bridge turn off and go under the N2.

Brenton has such a fantastic sandy beach with rock pools and unusual sandstone rock formations  at one end (similar to Kenton-on-Sea, which is a lovely resort between the cities of Port Elizabeth and East London). You can walk along this beach to Buffalo Bay – which is a popular spot for surfers; it is around 7km return.

Since we were still feeling tired from yesterday’s driving we decided not to do the walk, but still ended up wandering leisurely along the beach for an hour or so and saw several oyster-catchers on the shoreline. Glimpsed lovely views over the lagoon on the way back to Knysna. 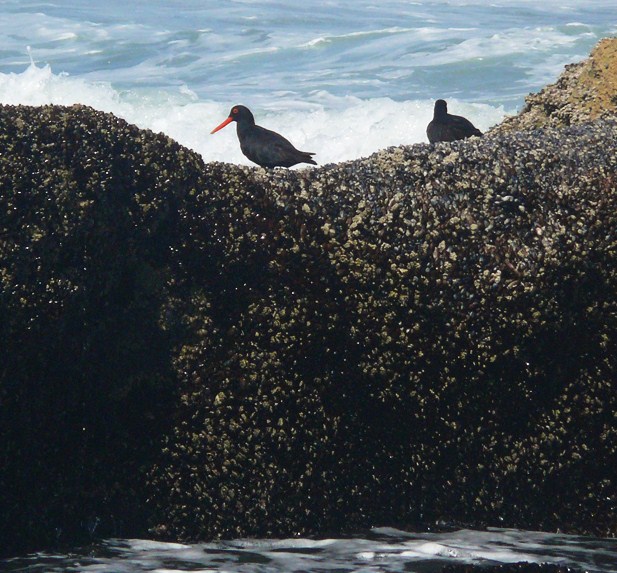 (Food note: On the Brenton road look out for Pembrey, a lovely country restaurant)

We returned to the lodge and whilst my husband had a rest, I went wandering in the lagoon which was now a sandy beach as the tide was out. This spot is fantastic for families and young children as it is so safe and the water is shallow and warm. I did get a bit wet when I waded through to the shoreline and hit a shelf: the water went from ankle to thigh deep!

We returned to the Waterfront for dinner at “The Dry Dock“. Food was OK, slightly “Nouvelle cuisine” so small portions, which was fine by us. I had a Wanton Vegetable Melangee to start with followed by Linefish, Aubergine, Avocado and Grapefruit, and my husband had mussels and calamari followed by Linefish with Prawns. We should really have had oysters as Knysna is famous for them, but unless they are cooked we actually don’t like them. Finished with Dom Pedro Amarula again – I told you, they can become addictive and I don’t even like ice cream! 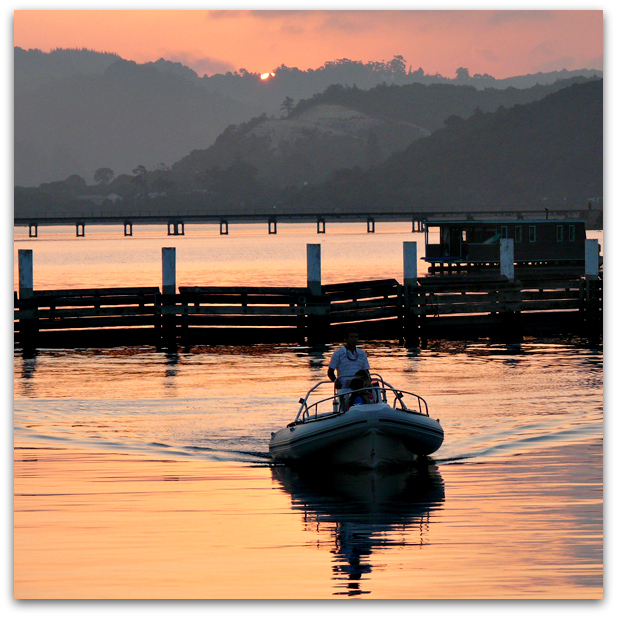 Oh, and did I mention the incredible sunset? The whole lagoon turned orange – beautiful! I just had to leave my meal to dash to the balcony edge and capture this scene.

We finished the day sitting outside our room in the warmth of the evening listening to the sound of cicadas and the gentle lapping of the waves in the lagoon – so peaceful, I could get used to this.