This former Cluniac Priory was torn down during the Reformation in 1584. For 450 years it was the home and workplace of monks and their servants, a refuge for pilgrims and a stopping point for royalty, clergy and nobility.

Paula over at Lost in Translation runs a weekly Black and White Sunday challenge. I have been intending to write some posts about the castles and priories I have visited in Wales, but like other posts, I haven’t quite got around to them yet. But when I saw this week’s theme I thought about the ruins I have photographed and which, to me anyway, always convey that moody atmosphere which clings to ancient buildings. You can almost hear the chanting of the monks, the slap of leather sandals on Welsh slate floors, the swish of robes through the Cloister and the murmur of voices in the Chapter House where the ‘Black Canons’ assembled each morning.

And of course the background of the Welsh hills and the glowering clouds in a wet January only serve to enhance the mood.

The Priory Church of St Mary and the Holy Cross, Binham was only a mile or so away from where we were staying so the first historical place we visited. The ruins of the 11th century Benedictine monastery are impressive, especially the nave which is now the parish church. The Reformation in 1539 saw the closure of the monastery and the buildings were dismantled. In fact the original building of Hindringham Hall where we stayed (in a cottage, not the actual hall) was built from stone from the monastery!

The most striking feature of the church at Binham Priory is the oddly blocked-up west front and windows which were bricked up between 1738 and 1780. It is an impressive building due to its size and the contrasting brick and stone work. It is also important from a historical aspect as an example of Early English gothic architecture in the 13th century. The west window (top) is thought to be an early example of ‘bar tracery’ in England. It certainly is very beautiful. In the spandrels and heads of the arches a variety of patterns are pierced into the stonework: quatrefoils, cinquefoils, trefoils and sexfoils,  culminating in the octofoil at the head of the west window. 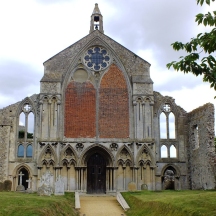 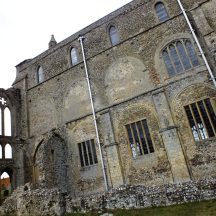 Side of the nave 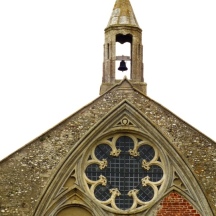 Inside the church is light and bright. The font is perpendicular – 15th century – and has eight sides. It is known as a Seven Sacrament font because of the carvings around the bowl, each one of which illustrates one of the sacraments of the church. This is a particularly East Anglian design and none are known elsewhere; there are 16 in Norfolk and 12 in Suffolk remaining. It would have been brightly painted. 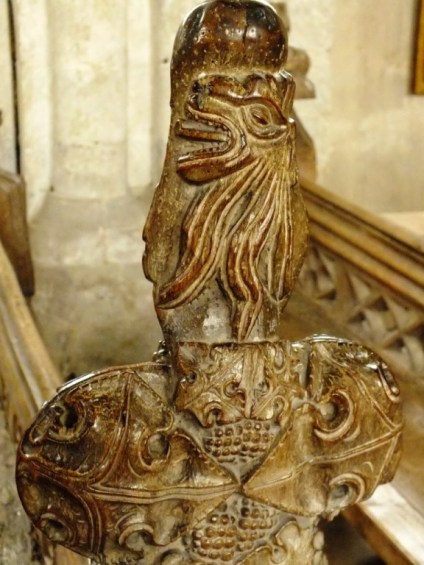 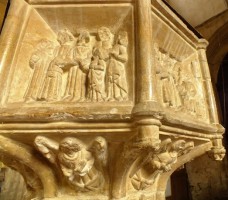 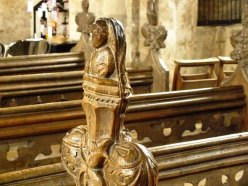 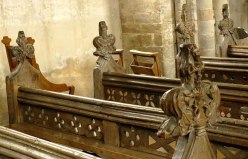 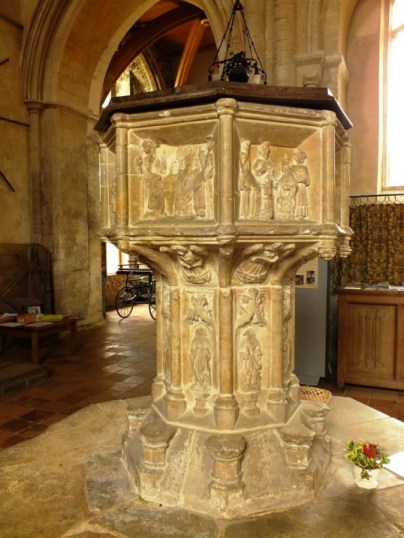 The Poppy Head Pews are another interesting feature of this church. During the fifteenth and sixteenth centuries, the benchends became more elaborately carved, with panelling and figures of people or animals, often humorous and frequently decidedly secular. Not all benches had backs to them (as in Cawston Church, Norfolk) and those which did had simple designs, some of which were added at a later date.

There are two misericord benches at the east end of the church decorated with a bearded head and foliage and the remains of the former rood screen which was painted over after the Reformation. The original medieval painted saints are now showing through.

In a beautiful quiet corner of the North Norfolk countryside, only a few miles from the coast, this former priory and church are well worth a visit and I was very impressed by the small museum inside and the information panels.

The village of Castle Acre lies further south of the county, only 4 miles north  of Swaffham and 15 miles east of King’s Lynn. It is well worth the drive to see such a lovely medieval planned settlement with the broad tree-lined Stocks Green where you can find a café and a pub. The town was entered in the 12th century by the Bailey Gate, now the only remaining gate of the town. Many of the houses in the town have been built from blocks of stone from the priory.

We stopped here on our way to Oxburgh Hall which is south of Swaffham mainly to see the Priory, but we were quite taken by the charming village and the castle too. 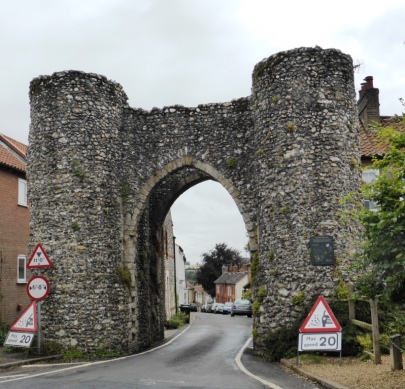 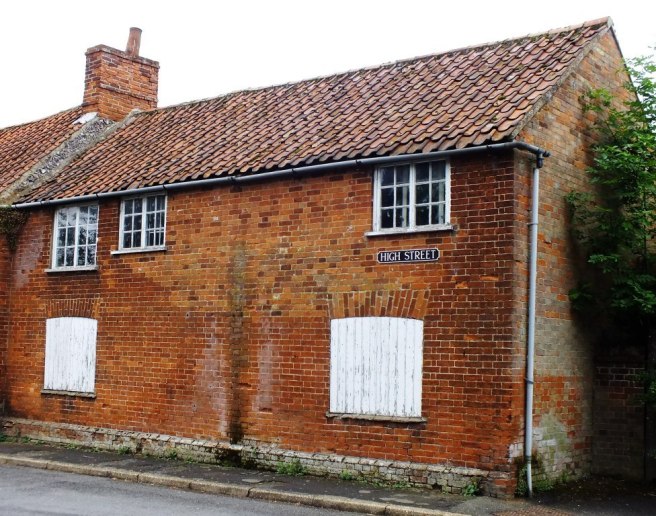 Castle Acre Priory, which is under the care of English Heritage, is a beautiful and peaceful place with some of the most intact Cluniac priory buildings in England. For 450 years it was the home and workplace of monks and their servants, a refuge for pilgrims and a stopping point for royalty, clergy and nobility. While rooted in the economy and society of Norfolk it was also part of a vast monastic network centred on the great abbey of Cluny in France. Walking around this site you get a feeling of the size and serenity of this place and if you use the audio tour provided then you can listen to the monks tales and walk in their footsteps. 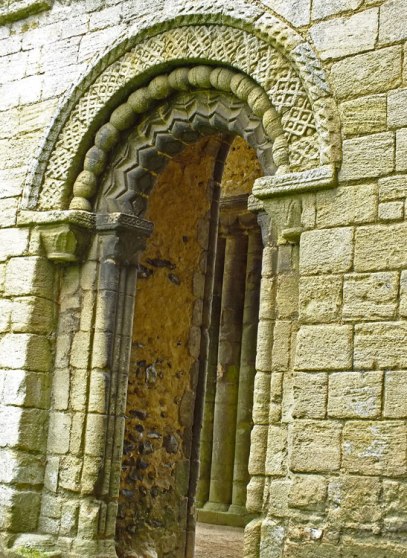 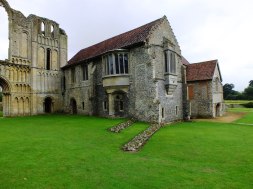 Whilst in Castle Acre we also visited the Norman ‘motte and bailey’ castle which was abandoned in the middle ages, and although what little of the building left is in ruins, there are impressive earthworks. 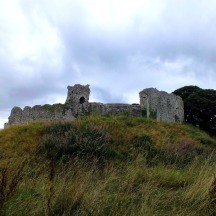 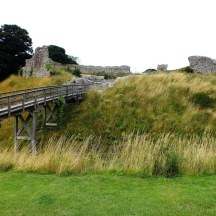 A great day out except for the weather which was a little damp!