This is my introduction to Ludlow, which was where I lived from 2011 to 2016. The name Ludlow comes from ‘lud’ the loud waters and ‘low’ a tumulus. If you were to ‘Google’ Ludlow you would find that it is the largest town in south Shropshire and has over 500 listed buildings. You may also discover that it is known as one of the best ‘foodie’ towns in the UK with regular open-air markets, local produce markets and both a Spring and Autumn food festival lasting over the weekend

Ludlow has been described as the “perfect English town”. It is situated on the River Teme in the southernmost part of Shropshire, on the Welsh Marches. It has a medieval street pattern and many ancient buildings including a castle and a magnificent parish church as well as streets lined with medieval and Georgian properties.

” The secret of Ludlow resides in the fact that, like York, it was once a seat of government in Tudor and Stewart England. A sense of its own identity and importance has never quite left it. That accounts for its strength of character and the lingering sense of authority. This is a town which, although the tide of history has receded from it, still manages to preside magisterially over the countryside one glimpses at the end of every street. ” – Sir Roy Strong

The natural starting point for a stroll around the town would be the Castle Square where the market is held several days a week and on the second or fourth Thursday of the month when the local produce market is held you can load up with local cheeses, meats, real ales from micro-breweries, bottles of home-made chutneys and preserves, soaps and even fresh herbs if you so desire. It is a traditional open-air market with 20-30 stalls selling produce from within a 30 mile radius of Ludlow. 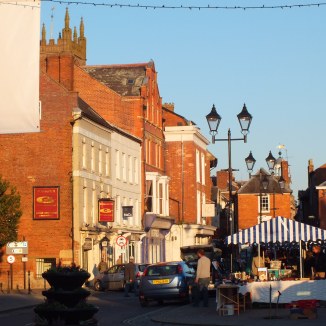 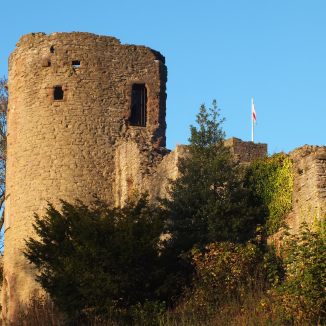 From here you can visit the castle. It is a ruin, but quite an interesting one, and it dominates the skyline from the river side of the town. It has a combination of architecture from Norman, Medieval and Tudor times. Parts date from the 11th century when built by Walter de Lacy. It was enlarged by Roger Mortimer in the 14th century and has been in the hands of the Earls of Powis since 1811. The castle was a seat of government for Wales for a time and it was involved in the Wars of the Roses with a major battle taking place at Ludford Bridge. Often events are held in the castle such as the Christmas Medieval Fayre (late November) and the Ludlow Festival held in the summer which features an open-air production of Shakespeare.

After visiting the castle, we’ll wander along the track around the castle and down to the Dinham Bridge and Millennium Green, where you can have a spot of lunch at the Green Café before feeding the ducks or swans and watch the children play on “Ludlow beach” a strip of shingle which is very popular for paddling on a warm day. Here is the Castle Weir where leaping salmon can be seen during the run in October/November each year to reach upstream spawning grounds and don’t forget to look at the restored Water Wheel which generates electricity for the building. As well as ducks crowding the river you can see the occasional heron, swans and even a kingfisher. 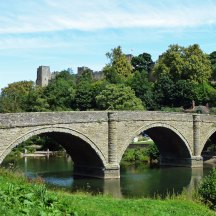 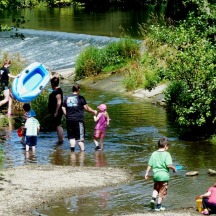 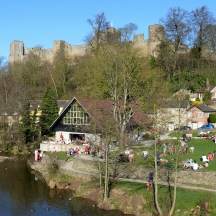 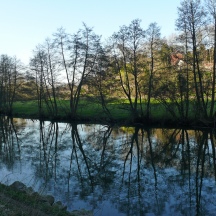 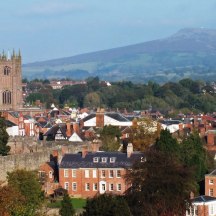 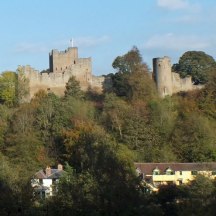 Next walk over the bridge, stopping to take a classic photo or two of the castle and the river, before choosing whether to head up to Whitcliffe Common via the Donkey Steps (once part of the packhorse route moving iron-ore through the county); right along a quiet road into the countryside; or left along the Breadwalk which stays close to the river and leads to Ludford Bridge. The Breadwalk was so named after being rebuilt in 1886 following a devastating flood in the town. The unemployed men, grateful for some work, were paid by Lord Clive in bread and blankets – a hard-hearted Victorian form of unemployment relief. It was first known as ‘The Bread and Blanket Walk’. 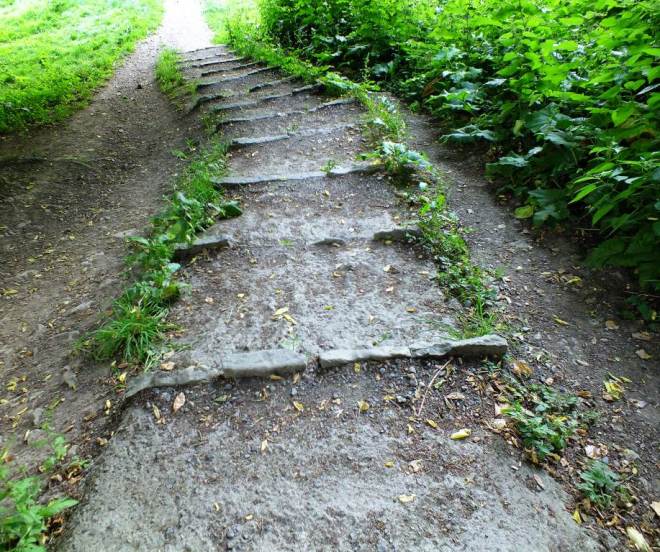 As you are a first-time visitor we’ll head up through the mixture of deciduous woodland and onto the grass common of Whitcliffe with its wild-flower meadows where you have the best views over the old town with the Clee Hill in the background. Sit a while on one of the conveniently placed benches and relax. There are also two sites of scientific interest on the Common– Teme Bank (The Ludlow Bone Beds are famous for exposures of Silurian strata with deposits of marine life forming beds as the sea retreated from the area) and the Long Trenches. It is likely that they were dug by the parliamentarians during the siege of Ludlow in 1646. Keep a look out for the Hawfinches which feed on the Hornbeam trees. 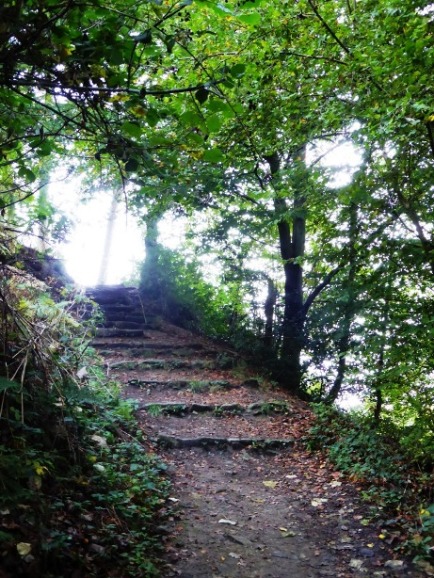 Stepping up to Whitcliffe 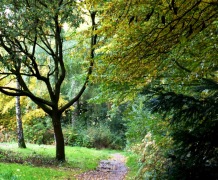 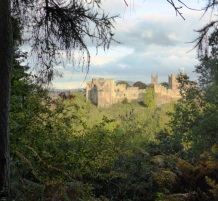 Looking back at the Castle 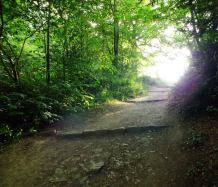 Walking through the woodland 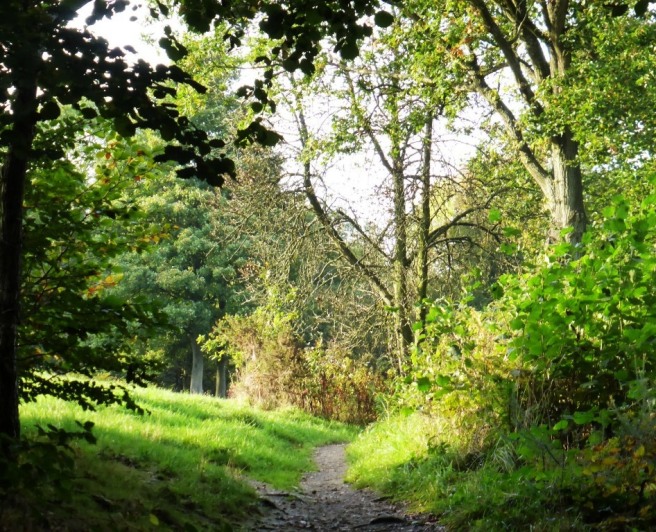 The path goes on

We can now head back down to the Breadwalk and continue along the river to Ludford, the site of the ‘Battle of Ludford Bridge’ on 12 October 1459 in the early years of the Wars of the Roses. If you want to pause for refreshment before tackling the last hill then the Charlton Arms can offer a series of comfortable terraces from which to enjoy views of the river and towards the town. If you head downstairs you can visit a room with a collection of the Shakespeare posters by Ludlovian artist Polly Hamilton from past productions of the summer festival at the castle.

Take a short detour across the road where St Giles Church and Ludford House (once a leper hospital) turn their backs to the road with the old Job Charlton almshouses skulking at the side of the road to the church. The polygonal lodge cottage served as a toll house for the main Worcester road until 1836. One of my favourite quiet spots is along the lane past the Old Bell House, once a coaching inn, and through the kissing gate onto a field which is forever changing crops from wheat to rape, and with two very photogenic trees. Ludford is a delightful area and often missed by visitors. 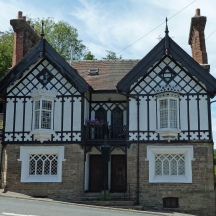 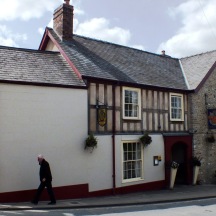 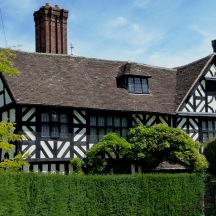 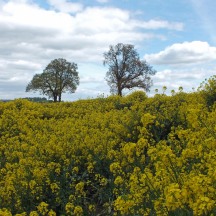 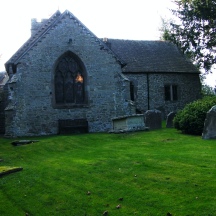 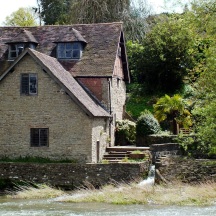 Retracing our steps we’ll cross over the Ludford Bridge, with a glance at the Horseshoe Weir, the third weir on the Teme in Ludlow, where you always find ducks and if you’re lucky a heron, then we’ll walk up Lower Broad Street, the centre of cloth working in the Middle Ages, towards the sole surviving gate through the old town walls. This road has lots of lovely cottages on the left-hand side with large displays of flora in numerous containers, and several shuts leading to private hidden gardens; very pretty. Next to the Broad Gate we pass by the Wheatsheaf Inn which is the best place for a Sunday carvery and they do a pretty mean mixed grill and steak and ale pie too. 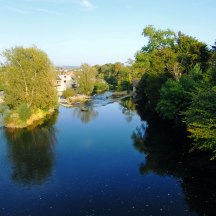 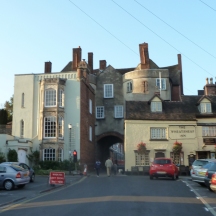 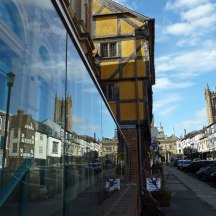 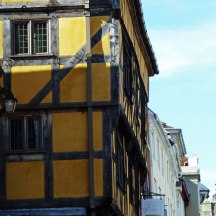 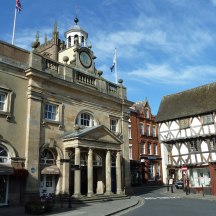 Climb up the hill on Broad Street which is one of Ludlow’s widest streets and lined with large Georgian fronted houses (some of which have medieval buildings behind the façade) passing the Methodist Chapel on the left opposite the house belonging to Marmaduke Gwyn, the father-in-law of Charles Wesley, the Angel, a former coaching inn, and de Grey’s tea room and bakery on the right where you can have a very fine English high tea.Finally at the top of the street is the Buttercross built in 1744 and formerly a butter market.

If you turn left here along Market Street you will find yourself back in the Castle Square where we began the walk.

Thanks to the Daily Post for giving me the opportunity to “Write a piece about a typically “local” experience from where you come from as though it’s an entry in a travel guide.” I hope you like it 🙂

Note: Sadly De Greys tearoom closed at the end of January 2014, but there are several other independent cafés and tearooms in Ludlow – try Emporos in the Bull Ring (go through Attorney’s Walk one of Shropshire’s Shuts).