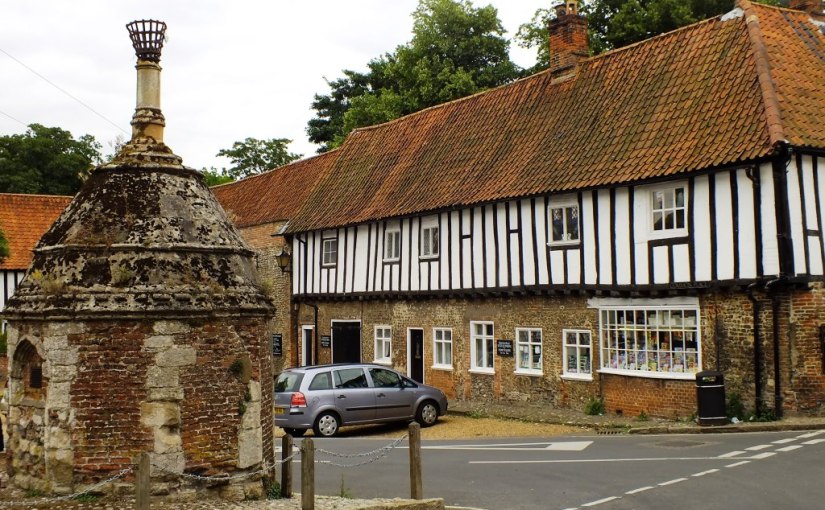 Walsingham is an unusual village in a remote part of the North Norfolk countryside tucked into a valley of the river Stiffkey. Unusual because it had been an important place of pilgrimage in Europe before the Reformation and, along with a good Farm Shop, restaurant and fish and chip shop, you can find tourist ‘pilgrim’ shops. I really didn’t know what to expect.

We first drove to the village on a Saturday afternoon and found it to be quite busy with several coaches parked on the outskirts. After a gentle stroll along the High Street viewing some lovely looking half-timbered jettied buildings and noticing interesting street signs such as Friday Market and Swan Entry we returned to Common Place with its 16th century pump-house and the former Shirehall, the entrance into the Abbey grounds. Unfortunately we’d left it too late as the grounds closed at 5 p.m. and it was now 4:30 p.m. So we had another wander around the village before heading for the Farm Shop and buying some good steaks for dinner. (There is a good chocolate shop on site too, but I managed to resist that one). 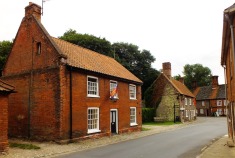 Walsingham  grew, along with the increasing numbers of pilgrims, with the founding of the Priory in 1153 and every English monarch from Henry III in 1226 to Henry VIII visited the Priory until its destruction and the destruction of its shrine in 1538. This was followed by a period of abrupt decline. Today the Anglican Shrine in Walsingham and the RC Shrine at the Slipper Chapel in Houghton St Giles are still visited by thousands of pilgrims.

After the dissolution the land was sold and passed down until in 1720 a house was built in the grounds of the former priory and it became referred to as ‘The Abbey’. It is the grounds of the Abbey and the remains of the priory church and buildings that we wanted to see, although apparently the best time to view the grounds is in early spring when the 20 acres of woodland are carpeted by snowdrops.

We returned to Little Walsingham on the following Monday when the village was much quieter and the grounds open for exploration. Despite being too late for the snowdrops and the wild-flower meadow the grounds are lovely and tranquil and you are allowed to picnic within them, so my advice would be to pop into the Farm Shop beforehand and make up a picnic lunch, although you can leave the Abbey grounds and return if you so wish. Entrance is a very reasonable £4. 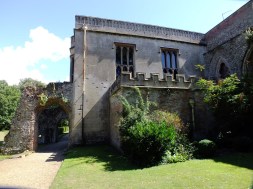 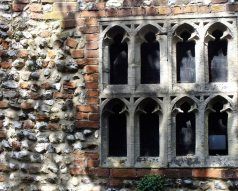 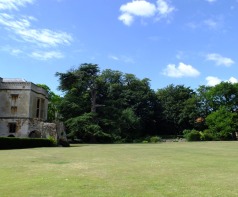 Although most visitors to Walsingham come, like us, to view the Abbey grounds it would be a shame not to walk the few hundred yards along the High Street and left into Church Lane to see St Mary’s Church. It is a large sprawling church and noticeable by its green roofs and tall spire. It can seen from the Abbey grounds whilst walking around the Turnstile and Park View or glimpsed from the River Walk. 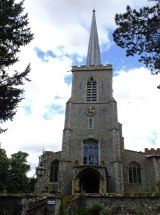 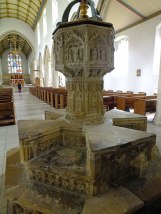 The church has a medieval exterior, but a light and modern interior as it was almost completely destroyed in 1961 by fire. The long nave has long, wide aisles and large clerestory creating an extremely light and spacious interior which is richly decorated . The magnificent Seven Sacrament octagonal font is its crowning glory with beautiful detailed carvings, though it was slightly damaged in the fire, and the original tomb of Sir Henry and Lady Jane Sydney had to be replaced with an alabaster cast. The East window was designed by John Hayward in 1964 and portrays Walsingham’s history.

Other churches in Walsingham include two other Anglican churches, St Peter’s of Great Walsingham and St Giles of Houghton and the Anglican Shrine built in 1931. There is a new RC church in the centre of Little Walsingham, a Methodist chapel in Friday Market and two Orthodox churches, the Church of the Holy Transfiguration in a former Methodist chapel in Great Walsingham and the Chapel of St Seraphim with a miniature onion dome in the former railway station. 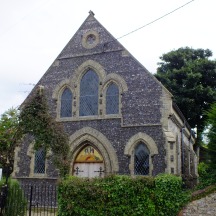 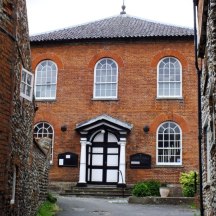 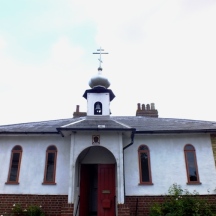 It is as I said at the beginning of this blog, a very unusual village and even if you are not interested in the religious attractions it is definitely a place to visit if you have the chance for it simply oozes history and, when all the pilgrims have disappeared, peace.