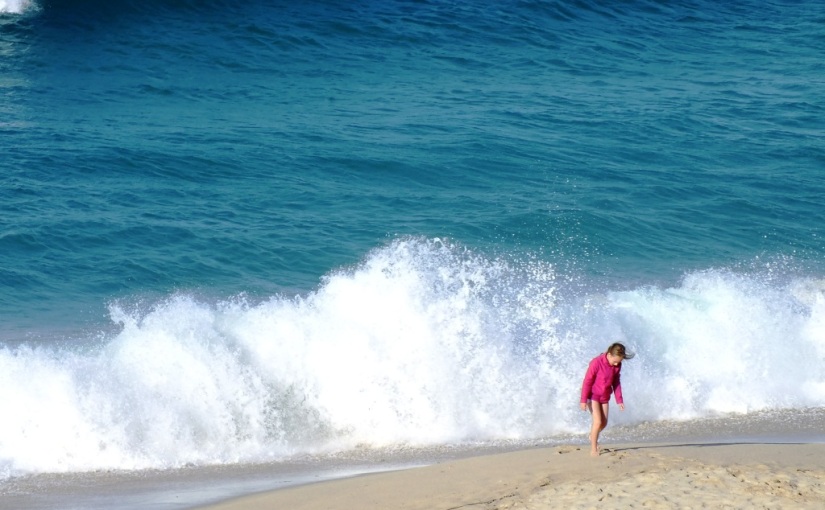 It’s hard not to fall in love with Cornwall where a magnificent coastline wraps itself around 300 miles of diverse landscapes. The big skies and wilderness of Bodmin Moor to the north with walking trails and prehistoric remains, further south the sun turns the sea turquoise and the land is scattered with Bronze age standing stones and Celtic crosses where the natural light is so blinding. In the west there is a special art scene and Cornwall is becoming a real foodie heaven with top-class chefs producing gourmet menus, daily offerings of fresh fish and seafood and local produce such as cheeses, wine and meat widely available from delicatessens, farmers’ markets and roadside stalls, not to mention Cornish pasties and well-loved clotted cream teas. 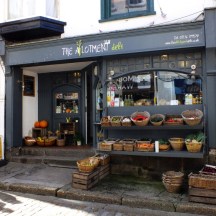 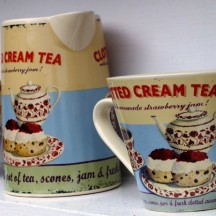 It has had a place in my heart since I was a child when I holidayed on the north coast near Bude and was mesmerised by the wild Atlantic rollers hammering the cliffs. Now it attracts me because it has one of the mildest climates in the UK, I like the closeness to the coast and the long sandy beaches which remind me so much of the western Cape where I spent my twenties and there is a slightly bohemian feel to the towns which appeals to me.

Cornwall’s harbours are best known for their white-washed or granite fisherman’s cottages with tiny secret gardens and net lofts huddling together along narrow lanes steeply leading to the sandy beaches where sunbathers lounge and surfers ride the waves on turquoise waters, or where fishing ports are filled with colourful fishing boats and yachts, so it would be remiss of me not to mention a few of these Cornish harbours that we visited during our recent trip there. 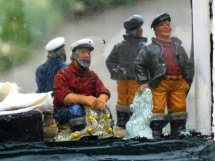 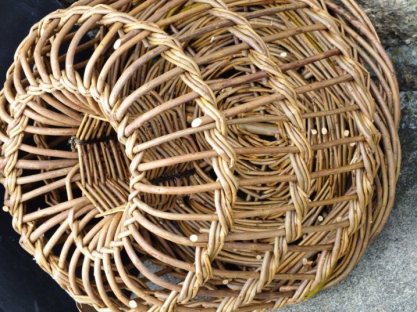 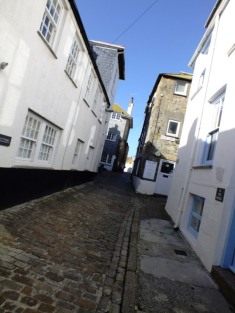 Closest to Penzance and indeed easily walkable along the south-west coastal path around Mount’s Bay is Newlyn. One of the busiest ports in the country Newlyn’s fishermen bring back all types of fish and shellfish and unsurprisingly there are a number of wet fish shops selling to the public. Newlyn was also popular with artists in the late 19th century and even today if you look beyond the busy harbour you will find a complex of narrow cobbled lanes and rows of Victorian granite cottages which influenced the particular style of painting ‘en plein air’ that became known as the ‘Newlyn School’. Although the movement ceased to exist in the early twentieth century the area still has a reputation as a colony for artists. 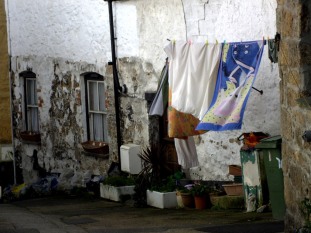 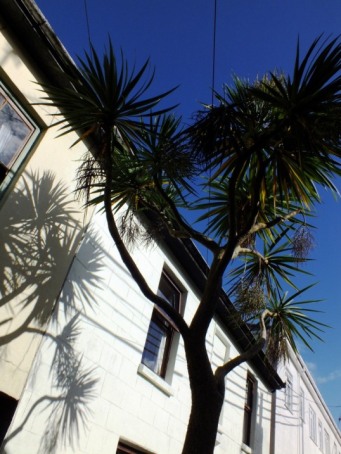 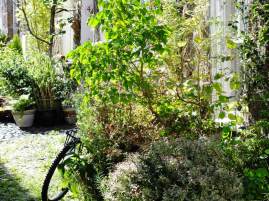 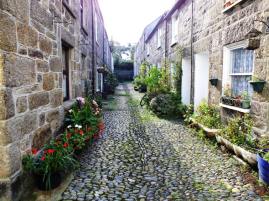 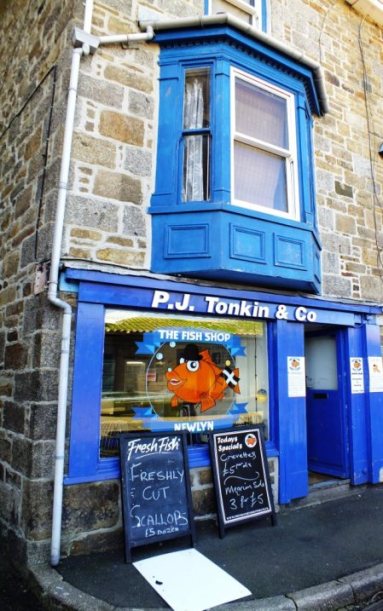 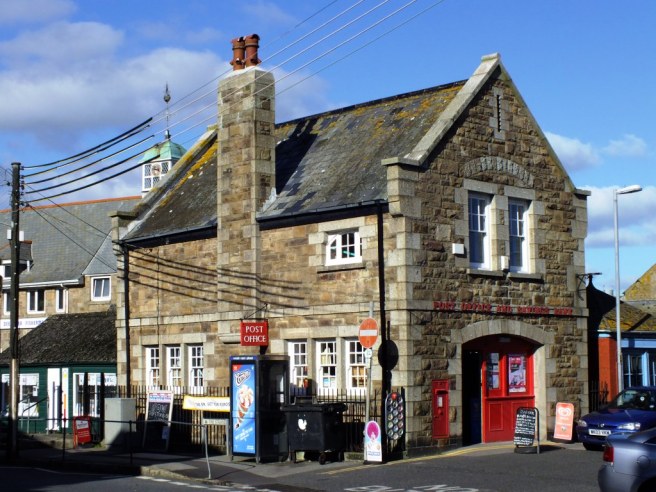 Not surprisingly Newlyn’s many attractions include several art galleries and craft shops, pubs, restaurants and a very good cheese shop. On the seafront near the Newlyn Art Gallery is a bronze statue of a fisherman in memorial to the fishing industry and those fishermen lost at sea. And the Tolcarne Inn close to the oldest bridge in the village has a reputation for live jazz music along with the Sunday roast.

A little further along the coast around the bay you come to Mousehole [Mowzel] the archetypal image of a Cornish fishing village with granite houses rising in tiers above the harbour. Today it is mainly home to holiday-makers and second-home owners who come to enjoy the pretty, safe and sandy harbour beach at low tide, the art galleries, studios and craft shops hidden among the narrow alleys and tiny lanes and traditional pubs and restaurants along the harbour. The village is famous for its Christmas lights which illuminate the harbour in the depths of winter and for Tom Bawcock’s Eve, a traditional pre-Christmas celebration commemorating a local hero who saved the village from famine by bracing the stormy seas to bring back fish for the starving villagers. Locals mark the event by baking the famous Stargazey Pie made with mixed fish, egg and potato with fish heads poking out through the crust. 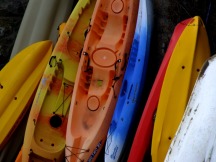 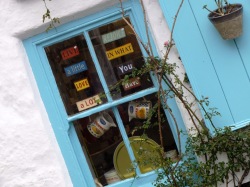 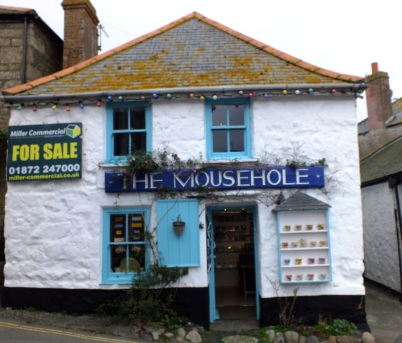 And finally St Ives. Although this fishing village lies across the peninsula on St Ives Bay, it is only ten miles from Penzance and easily accessible by public transport. The twenty-minute ride on the train, changing onto the branch line at St Erth, is probably the best way to arrive as it snakes around the golden coves into the town. We ate lunch at two fabulous beach cafés there – one on Porthminster Beach with views to Godrevy Lighthouse and the other on Porthmeor Beach with great sea views. There are two more beaches in the town, Harbour beach and Porthgwidden and it all feels like a subtropical paradise. St Ives’s arty reputation is reflected in the number of studios, exhibitions, art galleries and craft shops and of course the Tate Museum and Barbara Hepworth Sculpture Garden. Behind the 14th century Sloop Inn on the Wharf and the Harbour beach there is a maze of narrow cobbled streets and fisherman’s cottages.  This is the heart of old St Ives, known to the locals as ‘Downalong’. 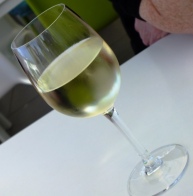 I do not advise driving into St Ives unless you are a confident driver. Rather use the train from Penzance or St Erth or the Park ‘n Ride from the Lelant Saltings, or the large Park ‘n Ride car park at the top of the town. You can walk into the town from there or take a shuttle bus (not free) one or both ways. It is a steep climb back to your car!