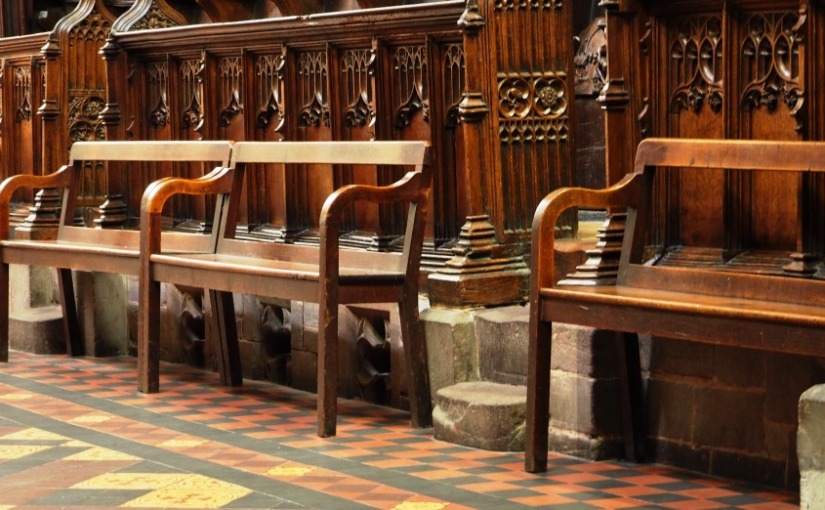 The Parish Church in Ludlow is famous for its 15th century misericords in the chancel stalls. These ignored carvings are found underneath choir stall seats and are mostly found in areas of the country whose wealth came from the medieval wool trade. The largest collection is housed at Salisbury Cathedral (106) compared to Hereford Cathedral (40) and the 28 intricately carved designs here in Ludlow.

Finally I have managed to get some decent photos of them all, so let me introduce you to them:

N6: The Antelope, gorged (the neck encircled by a coronet or collar) and chained is the personal badge of Henry VI in whose reign the misericords were carved. The grotesque masks either side are usually regarded as pagan imagery so an odd choice to accompany the Antelope. Leafed faces are often associated with the Green Man present at May Day celebrations. In a Christian context they are more likely to be a reminder against loose morals and sin.

N7: A bishop supported on either side by a mitre. Possibly a portrait of Thomas Spofford (1422-1448) during whose time the chancel was enlarged and whose name appears in the great east window.

N8: The three ostrich feathers have been the personal badge of the Prince of Wales since the mid sixteenth century. At the time of this carving it was the badge of the Black Prince, Edward of Woodstock who died in 1376 before he could succeed to the throne. He was father of Richard II (N10)

N9: Here we have an ass preaching at the pulpit to a congregation of birds, geese and other farmyard animals. On the left two figures are whispering to one another having spotted the deception. The moral is about the gullible and foolish listening to false doctrine, a warning against the followers of Wycliffe, the Lollards.(John Wycliffe was concerned about the wealth of the clergy in the Middle Ages and not liked by the Church)

N10: The Hart at Rest is the badge of Richard II who was deposed by the first of the Lancastrian kings, Henry IV. The Yorkists regarded Richard as the last true legitimate monarch. In the heraldic version the Hart was white. The hounds on either side gave the idea of the chase.

Source of text: Historic Ludlow ” The Misericords and Choir Stalls” by Peter Klein (1986)