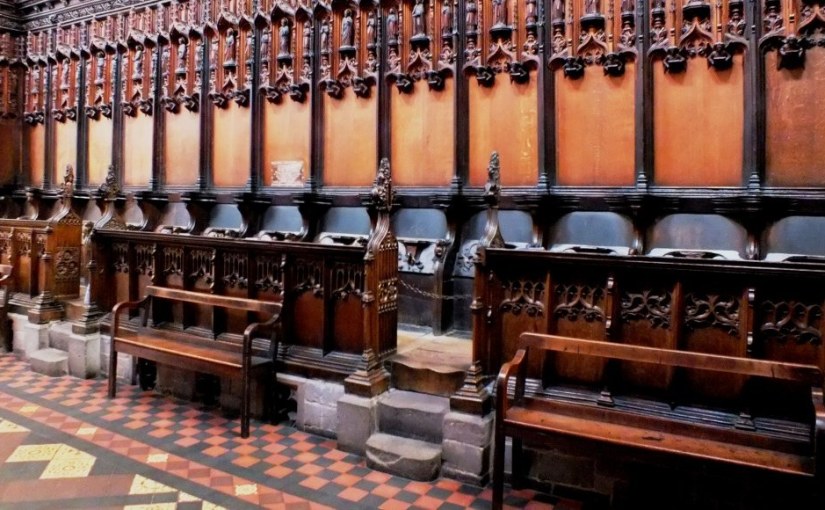 The Parish Church in Ludlow is famous for its 15th century misericords in the chancel stalls. These ignored carvings are found underneath choir stall seats and are mostly found in areas of the country whose wealth came from the medieval wool trade. The largest collection is housed at Salisbury Cathedral (106) compared to Hereford Cathedral (40) and the 28 intricately carved designs here in Ludlow.

Finally I have managed to get some decent photos of them all, so let me introduce you to them:

S1: One of the most famous of the Ludlow carvings and one that much speculation has been made about. The central figure is obviously a successful tradesman surrounded by his tools. The figure on the left is damaged but appears to be pointing to the right where we find symbols of the grave. The simple message being that no matter how wealthy and successful you are in life, death comes to us all.

S2: Simply a decorative arrangement of leaves with the distinctive rippling surface texture seen also on the poppy-heads of the north choir stalls.

S3:  Flanked again by leaves on either side this central character could be a porter or a peddlar putting on his boot and preparing for the road, perhaps with a bale of cloth on his back. Bales of white woollen cloth known as ‘Ludlow Whytes’ were well known in London and fetched good prices there.

S4: For once the carving of womanhood appears to have been done with affection. The suggestions are that it may show a woman and her daughters, or married and unmarried women.

S5: The owl is a medieval symbol representing ignorance not the wise old bird we think of today. In fact it was seen as a creature of the dark, shunning the light of the Gospel. It is being mobbed by two carved birds their necks twisted inwards.

Source of text: Historic Ludlow ” The Misericords and Choir Stalls” by Peter Klein (1986)