For me, November and December are the harshest months. The days constrict to just a few hours and all light seems to get sucked from the air. We are left with a dull pewter greyness that seems to invade my soul making me feel dull and joyless. I look for anything that casts a precious light into this bleakness and was pleasantly surprised to find some cheer on my December stroll.

The linden (lime) trees were in a sorry state, only a few golden leaves hanging on after all the recent gales, their whippy branches resembling some sort of alien creatures. The benches empty, despite the unusual warmth of the day.

A quick peek through the gates of the castle and a view you haven’t seen before from this angle. In the background you can see a motor-home parked on Whitcliffe Common and from here it looks quite close. No notion of the narrow gorge where the River Teme flows through. The stonework looks oddly textured and coloured today.

Down by the river the heavenly sight of the Mahonia with its  bright racemes of blazing yellow flower and smell of lily of the valley cheered me up no end as I approached Millennium Green. 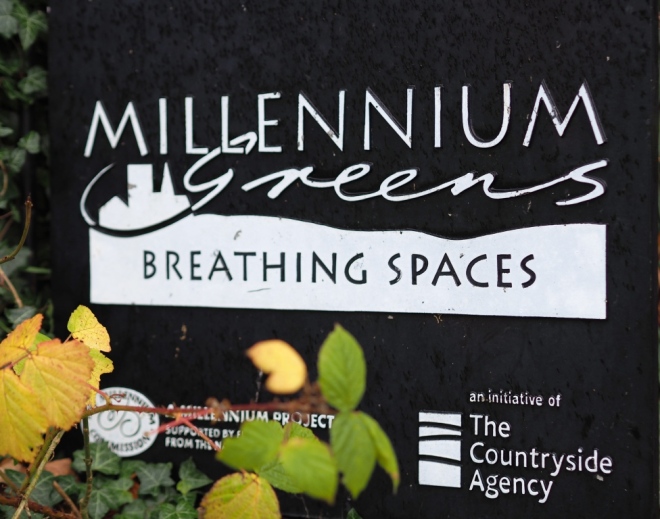 A Viburnum Tinus was also in flower, the pink buds opening to white flowers contrasting with the blueish-purple summer berries. A delicate vanilla-like fragrance fills the air around the shrub. 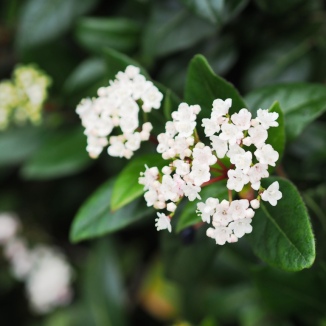 The ducks (mallards mostly) were busy courting and I watched two pairs as they bobbed up and down in turn, getting closer and closer to each other after each bob. I have never witnessed this courtship before.

At the same time a pretty grey-wagtail, which is more colourful than its name suggests with slate grey upper parts and distinctive lemon yellow under-tail, dipped her way around the pebble ‘beach’. The water level was high due to rain over North Wales, but not as high as I had expected, though evidence of mud on the pathway indicated that it had been higher recently.

And gold and amber shades still exist among the trees. 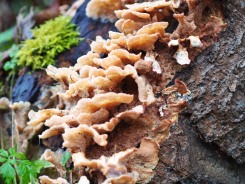 Heading along the Breadwalk in the dampness I came across someone with a drone taking photographs of the river. I was tempted to wave. 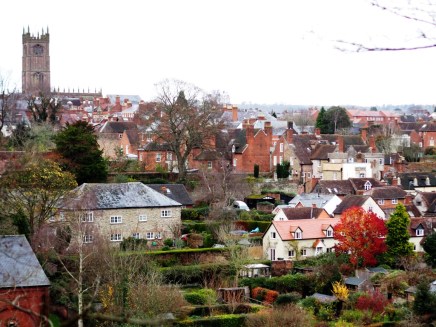 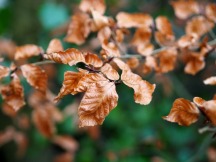 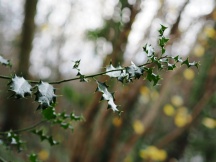 Has to be holly

Finishing the walk along Lower Broad Street I was pleased to find some signs of Christmas before the dullness of the afternoon descended in to darkness. 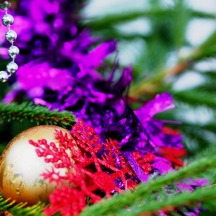 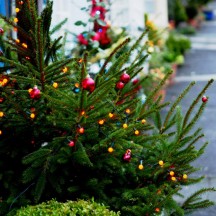 And a final look at those berries/cherries that have intrigued me all year-long! (I think the strange yellow circle in the photo is a reflection from the traffic lights)

Edit: January 2016 – In an effort to try and establish what this tree is I picked one of the fruits and took it home to dissect it – finding apple pips in the centre I can conclude that it is in fact a crab apple! 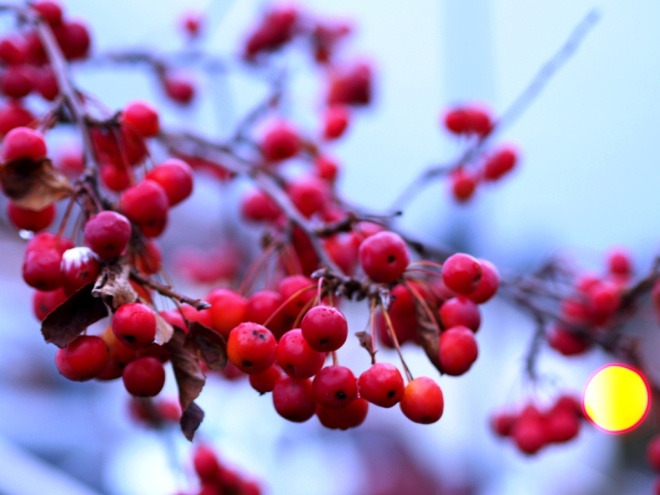 The Cardinal has decided to have a photo project going throughout 2015 – a blogging event, a monthly photo challenge. Find a location near your home, take somewhere between 5-20 photos and post them in a gallery in your blog. Continue to do this every month. The idea is to capture all the changes: the seasons, the weather, different times of the day, some night photography perhaps?