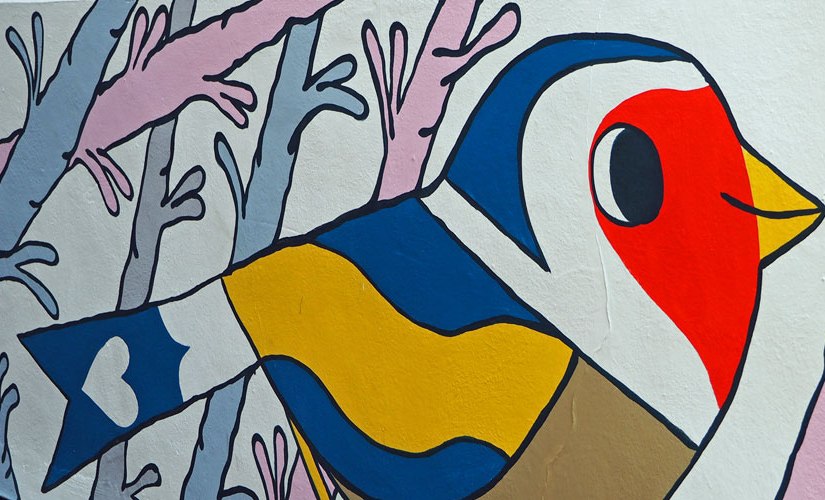 Leave Bear Steps on Fish Street (1) via Grope Lane to exit onto the High Street. On the corner is the former Cross Keys Inn. (44)

(The medieval folk were quite apt to call ‘a spade a spade’, or in this instance, the heart of the red-light district was called Grope Lane (ahem… shortened from something even more unacceptable). These areas were often found in the centre of market towns, such as Shrewsbury, to  please the visiting market tradesmen who came to the town and whose stalls were close by, as well as the locals. St Alkmund’s Place was used for the market until the thirteenth century. Most towns have renamed their streets to something more genteel, such as Grove or Grape or Grave – you get the picture. Shrewsbury has retained its name, but then with names like Mardol and Dogpole you can sort of see why!) 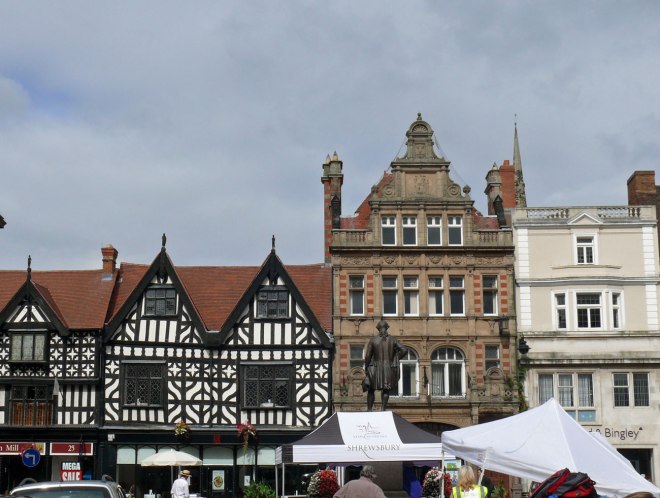 Opposite is the Square. From here you can see several important buildings: Owen’s Mansion (41),  the former Plough Inn (40), Wolley’s House (39), the Old Market Hall (38), the former Music Hall (37), and the very interesting Alliance Assurance Company with its Flemish styled ornate building of pink banded brick and grey stone. Look at the top of this building and you will see the loggerheads (leopards or lions) the Salop coat of arms.

Before exploring the square carry on along the High Street, to see Ireland’s Mansion (42), to the corner where you will find another insurance building on the corner of Pride Hill (named after one of the great wool merchant families) and Lloyds Bank (43).

Back at the Square take a look at the open-arcaded Old Market Hall with the impressive timber work of the former Plough Inn on the right. A statue of Lord Clive of India (1860) by Baron Marochetti stands guard: he was Mayor of Shrewsbury in 1762. 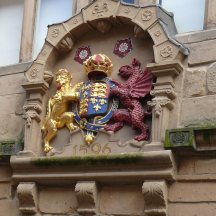 It was built in 1595 and has similarities with the Old Grammar School, especially the windows and scrollwork parapet. The carved works set in the first storey have been salvaged from other buildings.

After examining these historic buildings make your way through the Coffee House Passage up to College Hill where you pass (36) and (35) and pass the green where the remains of Old St Chad (Lady Chapel) are found. Cross the green on to Belmont (31) (33) with its Georgian houses, which runs into Milk Street and Wyle Cop which is close to where we ended the first trail.

From here we’ll head down Belmont Bank and Barrack’s Passage to exit on to Wyle Cop next to the Lion Hotel (26) and Henry Tudor House (27).

Henry Tudor House is of great importance, not only because Henry VII is reputed to have stayed here before the Battle of Bosworth (1485) in which King Richard III was killed. It is an example of a three-storey house where the hall was above a shop. The medieval traceried window (above the blue plaque) would have lit the first floor hall.

Turn right on to Wyle Cop to have a look at the magnificent buildings including Mytton’s Mansion (28) (Thomas Mytton held the position of Sheriff of Shrewsbury) and Tanner’s Wine Merchants.

From here you have a choice of routes – straight on Under the Wyle and across the English bridge to the Abbey; right along Beeches Lane and on to the Town Walls; or across the road to St Julian’s and the Greyfriar’s bridge form where you can walk along the tow path in either direction or cross the River Severn into Coleham.

Or retrace your steps up Wyle Cop and the High Street and back to the Bear Steps. And take a look at the Abbot’s House (3) on the corner of Fish and Butcher Row.

Shrewsbury’s Shuts and Passages: a unique maze of narrow alleys which criss-cross the town centre – part of the town’s medieval street plan.

Dogpole: a medieval street name which may derive from ‘ducken‘ to stoop and ‘poll‘ a summit which was thought to refer to a low arch in the inner wall.

Mardol: the name of the street means ‘Devil’s boundary’

Wyle Cop: thought to be Saxon or medieval English for ‘top of the hill’. This was once a very busy thoroughfare from the Abbey and over the English bridge with Telford’s London to Holyhead route.

Under the Wyle: under the hill