We were in Colchester at the beginning of September for a wedding so didn’t really do much in the way of exploring. Given my love for architectural styles I did have a brief wander around the Cultural area where we were staying to see what I could find.  It is of course a very old Roman town (Camulodunum ) and once the capital of Roman Britain, but was attacked and destroyed during Boudica’s rebellion in AD 61.

At only 50 or so miles north of London it is growing fast as a commuter town.

We stayed at the recently opened Greyfriars Hotel on the eastern edge of the High Street.  It is not only a beautiful C18th neo-classical building, but was for a hundred years a much-loved icon of educational excellence and, even centuries before 1755 when the current house was built, its site had religious, social and educational significance. Occupants have included friars, nuns, householders, clergy, physicians, horticulturists, an industrialist and students (young and adult). Empty from 2007 when sold by Essex County Council who decided it was no longer fit for purpose for education the building has been transformed.

The wedding we were attending was held across the road in the Minories – another lovely Georgian building and now an art gallery and centre for post-graduate study in art. This house in a very similar style to Grey Friars was bought in 1731 by Isaac Boggis a merchant in the wool trade.

Continuing along the High Street you reach Castle Park and another neo-classical designed Georgian house – Hollytrees – which was built in 1718 by Thomas Blagden for Elizabeth Cornelisen. It was completed by March 1719 but unfortunately Elizabeth passed away before she had the chance to live in it. It is now a museum (free entry) and forms the eastern part of Castle Park.

In front of the grand entrance to Castle Park and the Castle stands a very beautiful war memorial designed by sculptor Mr. Henry C. Fehr. The Winged Victory is a figure of exquisite beauty – the poise is perfect. In her right hand she is holding a sword, point downwards so that it represents “The Cross of Sacrifice” and “The Sword of Devotion,” and in her left a wreath of laurel. There is a figure of St George standing on the dragon and a figure of a lady holding a dove and representing Peace. The gates to the park are also part of the war memorial and donated by Lord Cowdray. Camulos – source of information

The Town Hall (below) is of Baroque style and designed by  John Belcher after winning a competition in 1897. Building work began in 1898 and the building was opened by the Earl of Rosebery in May 1902. The 162ft Victorian tower was presented by industrialist James Paxman with a statue at the top of St Helena, Colchester’s patron saint. 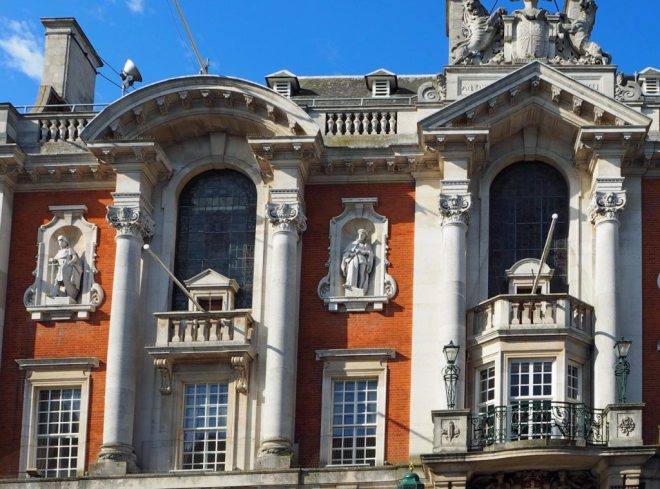 There are some other nice bits of architecture that caught my eye in passing along the High Street.

The Fire Office 1820 by David Laing 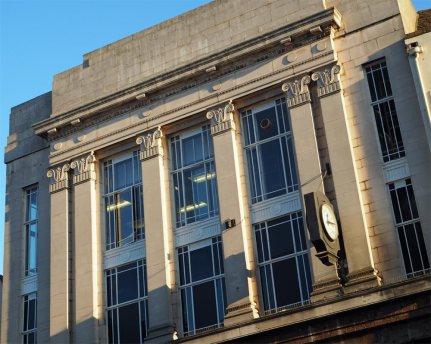 and since this includes some interesting windows I shall link this section of the post to Dawn’s A Lingering Look at Windows challenge.

Cutting through the park I found myself in the Dutch Quarter which is located just north of the High Street and includes: Maidenburgh Street, West Stockwell Street, East Stockwell Street, Stockwell Street, St Helen’s Lane, Northgate Street and Nunn’s Road. It was the 16th century home to Flemish Protestant refugees fleeing religious persecution having been defeated in a rebellion against Catholic Spain. Many of them were skilled weavers, and it was through this Dutch community that Colchester became famous for high-quality cloths.

The houses pre-date the Dutch arrival and were formerly inhabited by the Jewish community and other immigrants. Today it is a quiet residential area. The Dutch Quarter fell into a state of decay during the early 20th century and received a Civic Trust Building award after being regenerated during the 1970s. 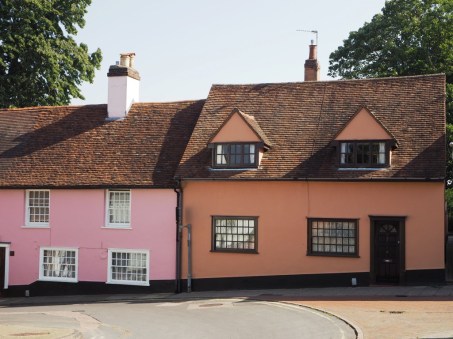 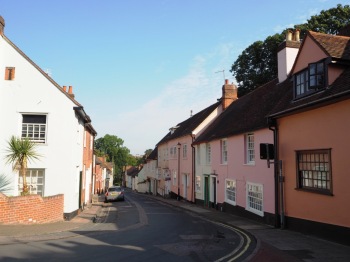 I’m sure Colchester has a lot more to offer, but I hope you have enjoyed a glimpse of the diverse architecture to be discovered in this town.

36 thoughts on “A brief look at Colchester”