Norwich Cathedral has more bosses than any other cathedral worldwide: some 1106, including those of Lyhart’s nave roof; those of the presbytery vault, added in 1480 by Bishop Goldwell; those of the transept vaults, added in 1509 by Bishop Nykke after a further fire; and those in the cloister. The bosses represent the largest collection of decorative roof bosses in Christendom, and depict scene from both the old and new testaments. Carved into the stone vaulting and then painted, each boss would have taken almost two weeks to complete. They represent a Christian view of the history of the world including carvings of Noah and the flood, the Nativity, the Crucifixion, the end of the world and the tales of judgement day.

There are some good examples of medieval art.

There are also bosses depicting mythical beasts and figures like the Green Man. It is thought that roof bosses such as these provided one of the earliest forms of theological education, at a time when illiteracy was high.

The east walk was built first in 1297, and aside from a Passion sequence and the Evangelists at the north end has mostly foliage bosses.

The south side was next in the mid 14th century, and most subjects here are the start of an ambitious Apocalypse sequence, which continues in the west walk which wasn’t finished till a hundred years later, with obvious stylistic difference in the later carvings which are generally much busier.

The north walk was also built in the 15th century, and aside from some New Testament subjects most of the bosses here concern the lives and deaths of various saints. 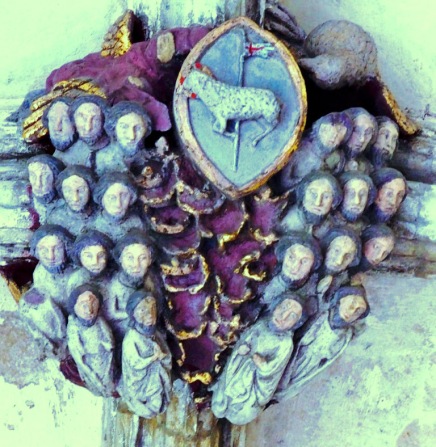 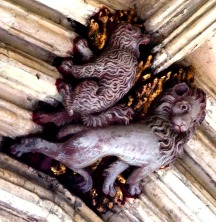 My images are all from the cloisters. They aren’t very sharp and the colours may be distorted, but it is difficult to get a decent shot when you are looking upwards and the light is poor. I didn’t attempt any from inside the cathedral itself. The cathedral website has removed a page about the bosses so I have struggled to find accurate information about them, instead it now directs you to download an App. As someone who does not possess either an iPhone or an Android device this is somewhat (I am being polite) annoying. When will websites stop assuming everyone is under 40 and owns one of these devices!