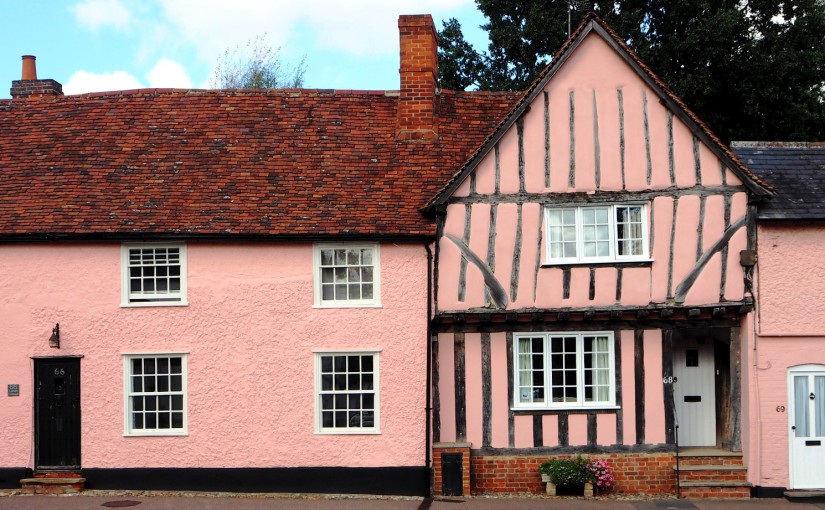 Our trip up the eastern side of the country began in earnest after the wedding in Colchester – next stop being close to Norwich where we intended to visit the cathedral. In fact most of this trip north was planned on seeing cultural and historical sites that we have previously not been to. Since the driving distances between some of the destinations were quite short I devised a route that took us to some hopefully interesting spots along the way. First stop on this glorious September day was Lavenham, a pretty village in Suffolk, England. It is noted for its 15th century church, half-timbered medieval cottages, Guildhall and circular walk.

Lavenham is one of the best preserved medieval wool towns in England. A foremost cloth-making centre from the fourteenth to sixteenth century it was famed its specialised production of woad-dyed broadcloth known as Lavenham Blues. It was the 14th wealthiest settlement during this period ahead of places like Lincoln and York. It now ranks amongst the most beautiful villages set in green and lush Suffolk countryside, still retaining its charm and history today. Only 40 minutes away from Colchester it is a popular place for a day trip.

We parked close to the Cock Horse inn and wandered into the village along the High Street. Cameras clicking at the sight of all the wonderful coloured timber-framed houses lining the street.

An elderly lady stopped us to let us know that one particular black & white house was new (no not the one above) and also to quiz us about Harry Potter (not for the last time along our route I can tell you, and in fact the Harry Potter connection began in Colchester where one of the waiting staff looked remarkably like him). When I said we haven’t read any of the books nor seen any Harry Potter  films, she uttered “Tsk…” and carried on her way. So I am guessing here that HP has connections with Lavenham. 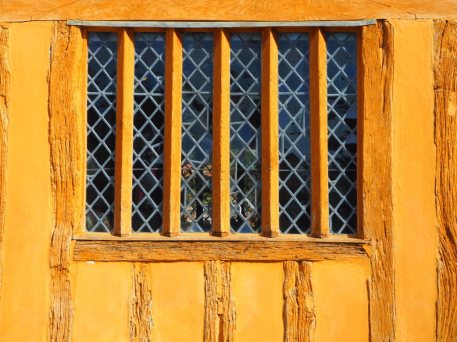 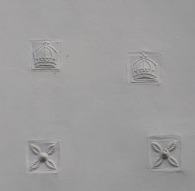 Apart from the timber-framing we were also pleased to see examples of Pargeting: the ornamentation of plastered and rendered building facades that would otherwise be smooth, lined-out or roughcast. Pargeting ranges from simple geometric surface patterning to exuberant sculptural relief of figures, flowers and sea monsters, but it is only skin deep, applied onto masonry or a lathed, timber-framed wall.

Lavenham reminds me a lot of Ludlow’s historic centre and is built on the same medieval street pattern. Much more colourful and affluent though. With art galleries, beauty salons, florists and antique shops cheek by jowl with the usual retail shops, pubs and tea rooms.

Throughout the village there are 300 ancient buildings, many of them listed as being of architectural and historic interest. Fine timber-framed houses mingle with small cottages and crooked town houses. 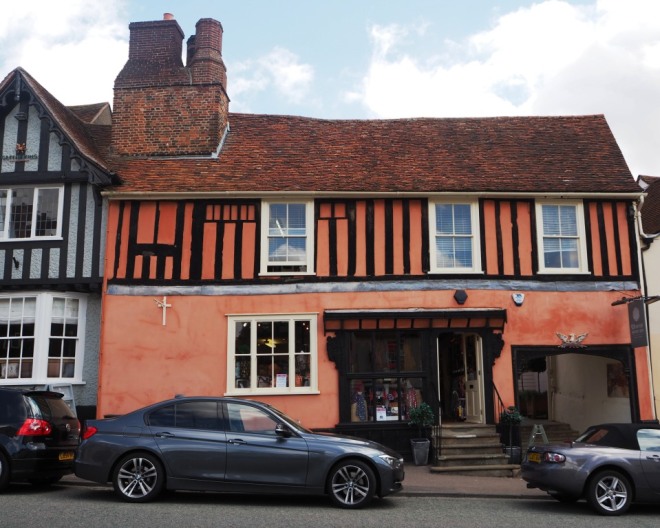 In the Market Place stands the magnificent Guildhall dating back to 1530 and now housing a National Trust museum providing visitors with a glimpse of Lavenham’s historic past. As well as religious guild activities it has served as a prison (the bridewell), workhouse, almshouse, wool store and a welcome club for American airmen in World War II. I will write a separate post about this building as it proved to be very interesting.

Close by is Little Hall, an independent accredited museum owned by the Suffolk Preservation Trust. The building dates back to the 1300s and built by wool merchants. It is an example of a hall house with a crown-post roof and also has a knot garden planned along Tudor lines with a traditional English walled garden. 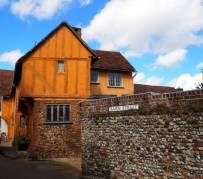 Returning via Lady Street you will find the Wool Hall on the corner of Water Lane which is where the Old Grammar School is located and where John Constable (of the Hay Wain fame) attended school.

And if you keep your eyes open you may find some very unusual and interesting objects in the village. 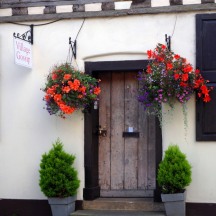