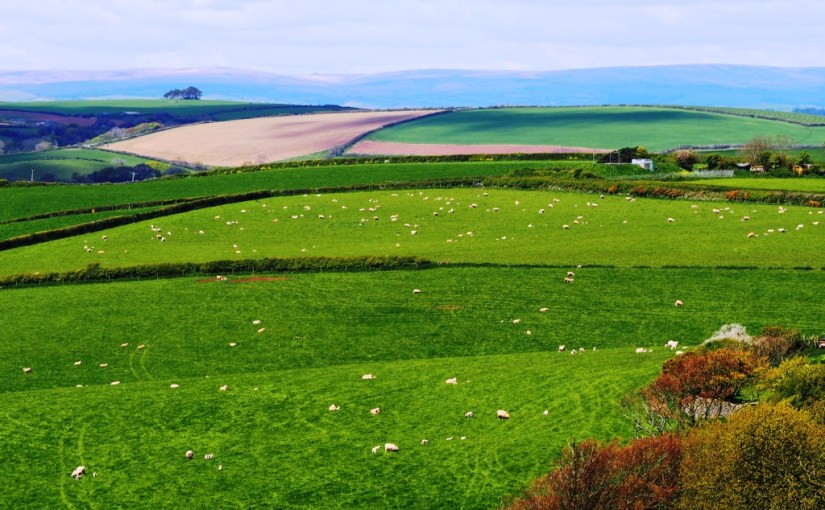 I booked a week away in south Devon in December when it was cold and dark and I needed something to look forward to in the spring months. We have always taken a spring break since we got together and as a teacher the Easter holidays were the first chance to get away. Even after leaving teaching the habit has stuck with us. In recent years we would return to the West Country and carry out research into where we would like to live. Now of course we have moved down to Cornwall so we can enjoy spring here without going very far.

One of my projects is to visit every county in England (and possibly Wales and Scotland), preferably to stay a few days, but at least to have driven through other than on a motorway. So for these ‘at home’ breaks (I refuse to use the word staycation), I look for somewhere where I haven’t been. 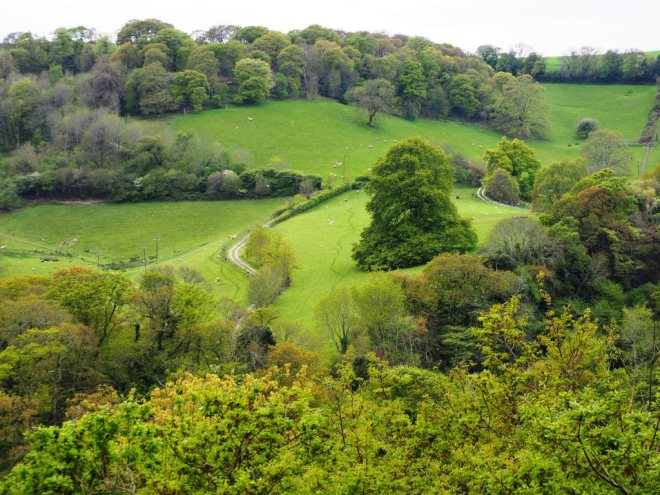 South Devon is only a couple of hours drive from us and a region I haven’t been to since I was 12 years old and on holiday in Buckfastleigh with my parents and dog. It was the year when we were supposed to be having a week in Devon and a week in London, but the car broke down shortly after Exeter and we found ourselves spending extra time in Devon. I do remember an amazing farmhouse breakfast where we stayed overnight and also stopping off at Stonehenge and running around the stones (you could do that in those days), but I recall absolutely nothing about London! My mother had a friend living in Orpington, then in the Kent countryside, now just another part of the Greater London sprawl.

Our cottage for the week (far right) 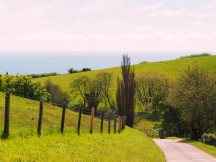 the rather steep hill down to the gardens 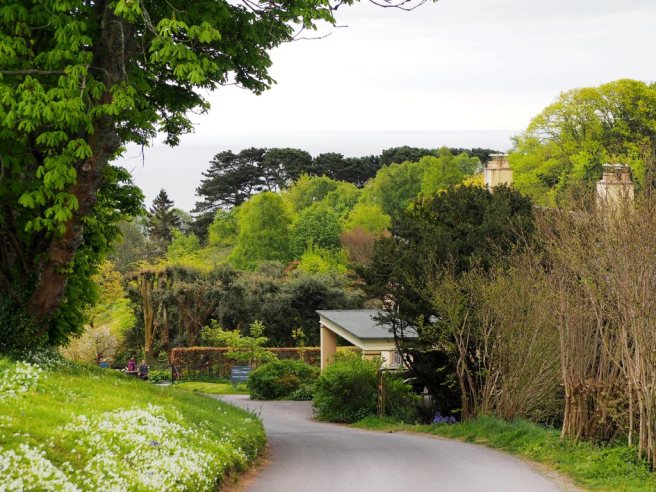 Anyway, I digress. I booked a week in a National Trust cottage on the estate of Coleton Fishacre on one side of the Dart river. I thought it would make a nice base until I realised that to get anywhere you have to deal with the conurbation of the English Riviera towns of Torbay. Or pay the extortionate sum of £9.50 or £8.50 (depending on which ferry you take), to cross the river over to Dartmouth. But it turned out OK. The cottage was well-equipped even if a little chilly in the kitchen, and the garden to which it was attached (albeit down a fairly steep driveway) was gorgeous, as too the 1930s Art Deco period house. 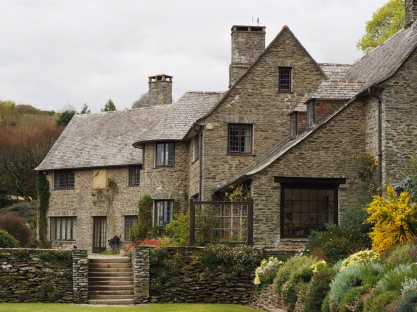 It also turned out to be the early Spring Bank holiday, a fact that had escaped me, which meant that certain nearby towns like Brixham and Totnes had roads closed over the weekend for the spring celebrations. We saw a lot of pirates roaming the streets in Brixham!

We didn’t make it to all the places I had in mind, but we did get to a few and the Devon countryside is a delight with all those rolling hills and red soil, though perhaps not such a delight to walk up.

Staying close by on the first day, we walked down to the Daymark, a 25 metre high navigational aid built in 1864 that can be seen from miles around. We were going to continue to Froward Point, where the Brownstone Battery, a coastal defence during WWII was built. There are a number of buildings in the site and anyone interested in military history would enjoy this. We on the other hand realised that the steeply sloping track down to the point would make coming back difficult and walking along the coastal path on the edge of the cliffs, is not an option, so reluctantly we turned back. 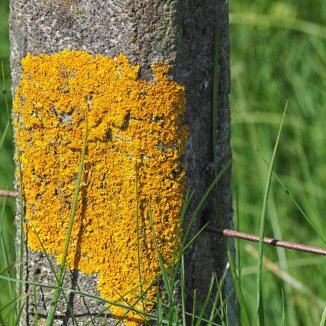 The view across Start Bay was amazing. We could see Blackpool Sands and Slapton Sands in the distance and the Start Point lighthouse.

Close by was another National Trust property, the former holiday home of Agatha Christie so we popped over there that afternoon to have a walk through the extensive woodland gardens and a nosy around the house. There are several ways to approach the property – by steam train and ferry, but if you want to use your car you must book a space first.

Berry Head Nature Reserve north of Brixham is another location of a former gun battery used during WWII and also the site of a Napoleonic Fort built to defend Torbay from the French, and was once an iron age fort. There are still some ruins and ramparts at the north and south fort and the Napoleonic Fort Guardhouse 1802, a Grade 2 listed building, is now a lovely visitor centre and cafe. We had a lovely walk around the nature reserve and then attempted to visit Brixham, but found it impossible to park there so decided to nip over to Dartmouth instead where we had a great (but not cheap) fish and chip dinner at Rockfish with a view over the river to Kingswear. 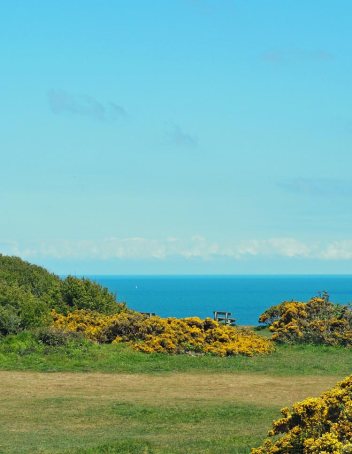 Talking of Kingswear, we fell lucky on our first evening as we drove into the town hoping to find somewhere to eat and passed a tiny cafe which does steak and mussels on a Wednesday evening. Taking a chance we went in and ordered the steak. It took a while to arrive (it is run by one woman), but was absolutely delicious and two steaks with all the trimmings plus a bottle of not too bad red wine came to less than £40.  You get the best photos of Dartmouth from Kingswear and vice versa. And I hadn’t realised just how remote and how small Dartmouth actually is.

Another trip took us to Buckfast Abbey and the Dartington Hall gardens. The only expense was £1 to park at Dartington Hall, and then £10 for excellent coffees and cakes as we sheltered from the rain after visiting the gardens. 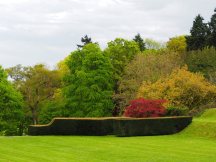 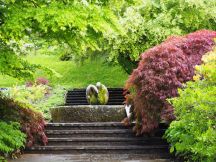 Our final day took us across the Dart and along the coast south towards Bigbury Bay in South Hams. We stopped off at Slapton Sands¹, a two-mile shingle beach that separates the sea from the freshwater nature reserve of Slapton Ley on Start Bay. This bay in the English Channel lies between the River Dart’s estuary and Start Point.  And from here you could see the Daymark over on the far headland. Continuing slowly through several small and winding villages and the town of Kingsbridge, we eventually arrived at South Milton sands only to find the beach cafe had already closed for the day!

This is beginning to become a habit. Oh, well, we didn’t really need a Devonshire Tea, although a strong coffee would have been nice after driving along those hair-raising narrow lanes with very few passing places to reach the beach. And why is it that other drivers always seem to expect me to reverse? Especially the ones in the monster BMWs or Range Rovers.

We had an early dinner booked back near Blackpool Sands at the Laughing Monk in Strete so after a stroll along the beach we retraced our drive stopping in Torcross to take a closer look at a Sherman tank and memorial.

Slapton Sands – Daymark in the background 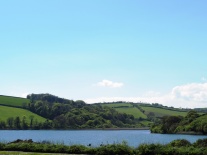 We had a delicious fishy meal at the Laughing Monk and then returned to Dartmouth to wait for the lower ferry to take us back across the Dart and to our home for the final night. Next time I must visit Dartmoor which loomed in the background for much of our time down in Devon. And I also think I am beginning to prefer staying in a town or village so we can walk to a pub or restaurant for dinner.

¹Slapton Sands has a very moving story attached to it. In 1943, the beach was taken over by the allied forces to use as a rehearsal area for the D-Day Landings. Unfortunately, a combination of live ammunition and poor visibility resulted in the deaths of 749 American servicemen. You can visit a stone monument which was set in place on Slapton Sands to commemorate the ill-fated ‘Operation Tiger’, along with a Sherman Tank at nearby Torcross.

50 thoughts on “Just Back From…. South Devon”