Ailsa over at Where’s My Backpack has given me the perfect opportunity to post a few night shots from my recent Barcelona trip. As someone who now lives in the countryside, where the only light is that from the moon, it opened up new photographic challenges.

It was going to be New York for my daughter’s 40th birthday getaway, until we saw the prices, and since we were only going for three days it made more sense to make it closer to home so we didn’t spend two of those days in the air. Yes we were going on another mother and daughter city break! Been a long time since the last one which was also to Spain just before my eldest grandson was born. He is now 14 years old. BA came to the rescue with some very decent European city breaks – hotels and flights for £350 each. We opted for Barcelona, a city neither of us had been to before and which has been well recommended by fellow bloggers. Thank you Restless Jo and Lucid Gypsy for all your help, advice and links.

A very early start meant we were arrived at Barcelona airport by 9 am – we stopped for a coffee before boarding the Aerobus into the city, tickets were prepaid for so no problems whatsoever and the buses are every 5 minutes so no waiting like you have to at Heathrow. A smooth drive with a drop-off close to the hotel where we were able to stash our luggage and head out to explore. First thing though was breakfast. We quickly found a lovely bar where we had coffee, orange juice (the Spanish make the BEST orange juice) and buttery croissants. Then we simply wandered for a few hours until it was time to join a free walking tour of the Gothic Quarter. The architecture in Barcelona is so interesting – I spent most of my time gazing upwards at the windows, carved entrances, wrought-iron balconies – Gothic mansions, Catalan Art Nouveau, and the magnificent imaginative Gaudí and taking far too many photographs. 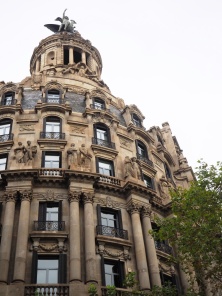 END_OF_DOCUMENT_TOKEN_TO_BE_REPLACED

Seen in Barcelona’s Gothic Quarter – a poster of graffiti on the shop door.

And my daughter browsing through the doorway of the Barcelona football team shop with the shopkeeper keeping watch. Both with the same body language!

Please visit Paula to see other representations of this week’s challenge.