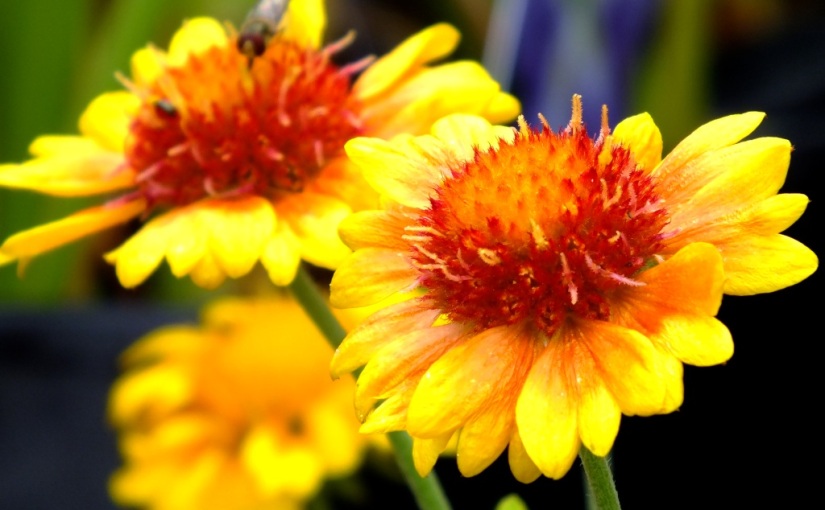 Hindringham Hall is privately owned, but the gardens are open to the public each Wednesday during the summer season and four times a year there is a tour of the house itself. We booked one of the two holiday cottages for a fortnight in the North Norfolk countryside, though I was worried that being four miles from the wild north coast, to which I am strangely drawn, would be too far. I should not have fretted, as it was an ideal location. Far enough away from the madding crowds, but close enough to visit regularly enough. And entering the five-barred gate, driving down the long gravel driveway and crossing the moat bridge leading to the hall was a lovely experience – for two weeks we could pretend to be Lord and Lady of the Manor 😉 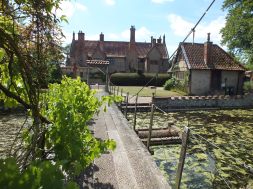 View from the Moat Bridge 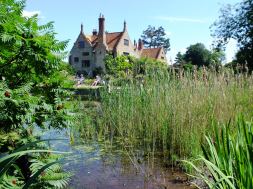 The Hall from the Bog Garden 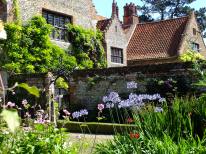 Entrance to the west lawn 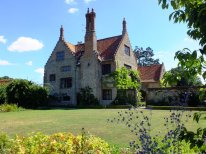 The village of Hindringham is typical of many small villages in the countryside today (not only in Norfolk) where there are few, if any, amenities. There is no village store or post office, no butcher or baker or indeed a candlestick maker, and the only pub is a bar in the cricket pavilion – aptly called The Pavilion – which is run by the community and only open on a Friday evening! Oddly enough though there is a Primary School, a large village hall and the church so you might have expected a shop at least.

Parts of Hindringham Hall were probably built from some of the stone torn down from the nearby Binham Priory, but it has been extended over the generations. It is now a handsome stepped-gabled building with a complete moat and a characterful history. There are not many fully moated houses remaining in the county; Oxburgh Hall (which has historical connections with this hall) is another.

The gardens are in several different sections, some outside the moat and the more private areas within the same plot as the house and bordered by the moat. In late summer they were probably not showing at their best, but there is still enough of interest to spend an hour or two drifting around them and finishing with a nice cuppa on the lawn. The walled kitchen garden was impressive for its well-stocked soft fruit bushes, salads, potatoes, beans and fragrant herbs mingling with the sweet scent of the colourful jewel-like sweet-peas. The buddleias alongside the moat opposite our cottage were smothered in butterflies the whole time – Large Whites, Painted Ladies, Red Admirals, Commas and a profusion of Peacocks. Within the private, walled, west lawn to the side of the house various clematis clung to the walls or pergolas, stone urns frothed with Pelargoniums and beautiful Romneyas stole the show, their egg yolk centres gleaming within the startling white, crêpe petals. 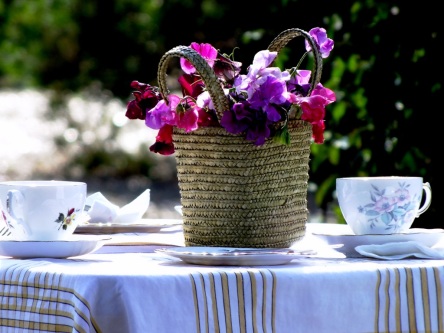 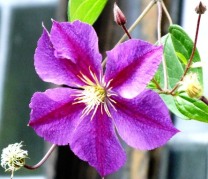 Roses and clematis wound their way around the thick rope-hung poles bordering the gravel driveway near to the front of the house and vibrant blue African Lilies provided splashes of intense colour. The roses were already ‘gone over’ by the time of our visit, but I am sure they would have been lovely. 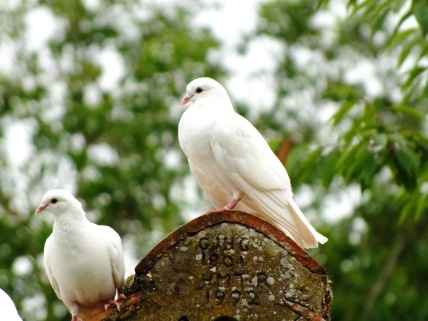 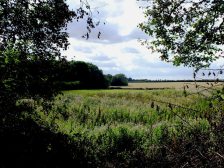 View of the Countryside 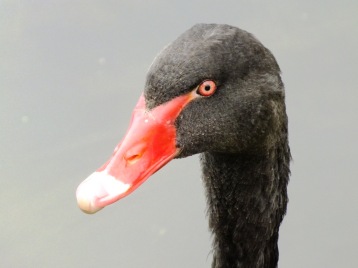 I needn’t have worried being away from the coast. Sitting, relaxing in the sunny, private garden of the cottage lazily watching the bright blue damselflies and red dragonflies flitting around, spotting the heron fishing in the moat, listening to the ducks and solitary black swan calling, seeing a sky streaked with oranges and lemons and stars shining from an inky background and drifting off to sleep with echoes of the soft hoot of a tawny owl is really what a holiday is all about. 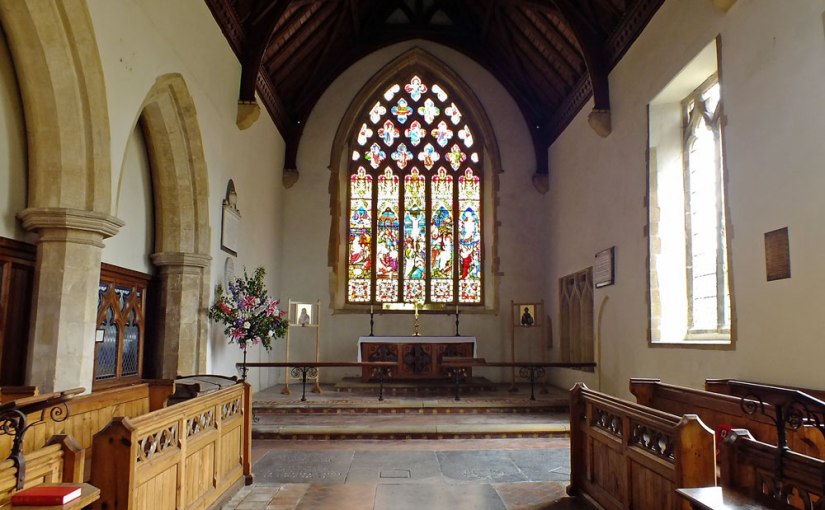 Hindringham St Martin dates from the 14th century and is typical of the churches in the region  having a tall west tower, a tall nave with north and south aisles and large Perpendicular windows. This building has five clerestory windows above to provide even more light to the inner space and consequently, like many of the Norfolk churches that we visited, the interior is surprisingly light and airy. There are two interesting windows, one at the east end of the south aisle containing some 15th century glass remnants and the other a Decorated window with five main lights and reticulated tracery.

The clock on the tower was given in 1867 to celebrate Queen Victoria’s Diamond Jubilee. 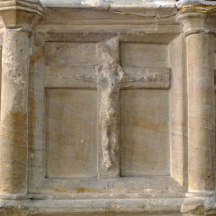 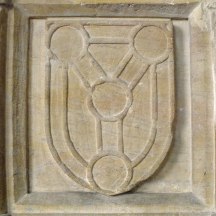 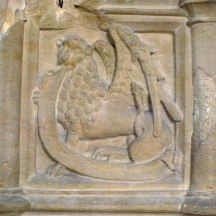 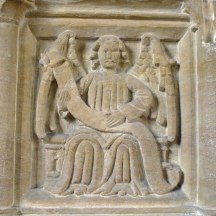 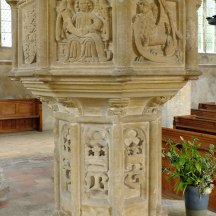 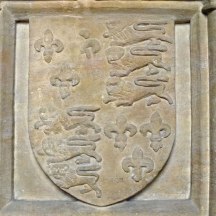 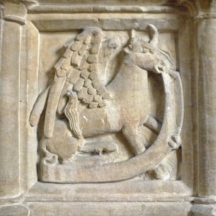 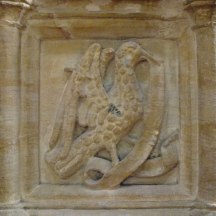 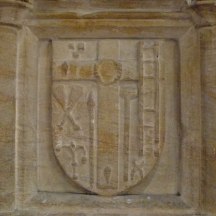 The east window of the south aisle contains some medieval glass and two distinctive angels formed from the fragments. You can tell that they depict 15th century angels by the wonderful feathery tights they are wearing. The other interesting piece is a baby on the corner surrounded by golden rays, which could be the ‘Christ Child in Glory’. 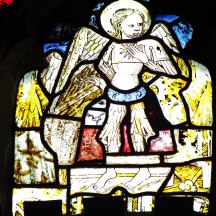 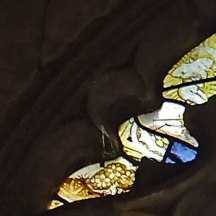 At the east end of the nave is a Victorian wooden eagle lectern. 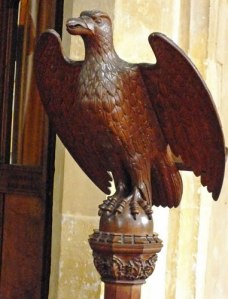 The impressive East window glass was made by Ward & Hughes in 1862 and shows several scenes from Christ’s Life and Death. Above these five main lights are representations from the Old Testament, including Noah’s Ark, the selling of Joseph and the Ten Commandments. 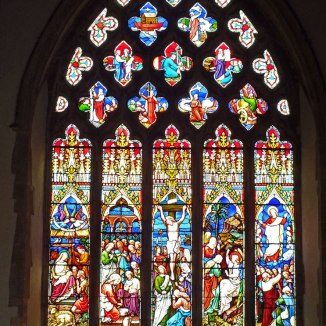 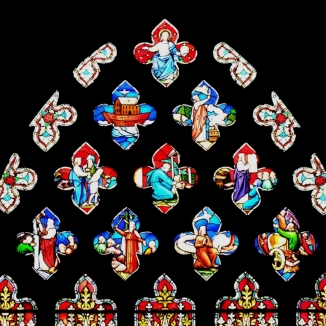 (sources of information: Church Tours in 2012 leaflet by Lyn Stilgoe; and the British Listed Buildings Website)