Long ago when the world was young, after the great flood, a giant halibut (so big you could stand on it) lived at Xwalkw (the mouth of the Nimpkish River). One day he swam ashore and transformed himself into a human. He built a house and made huge beams to be placed on top of the vertical poles, but he was unable to lift them into place. As he worried about his problem he heard a noise and turned around to see a Thunderbird alight on a huge rock.

This supernatural bird offered assistance and grasping a beam in its talons, flew into the sky and put the beam in position. Then he descended and removed the Thunderbird mask and costume and ordered them into the sky saying “You shall never flap your great wings to cause thunder, nor flash your great eyes to cause lightning, only when death comes upon a prince or princess of my descendants.”

He then announced that he would be the brother of the first man and began to build a house for himself. This is why the ‘Namgis have the right to display the Thunderbird and the Halibut as their crests. 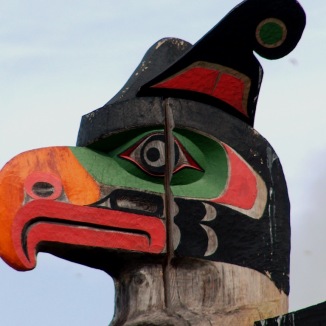