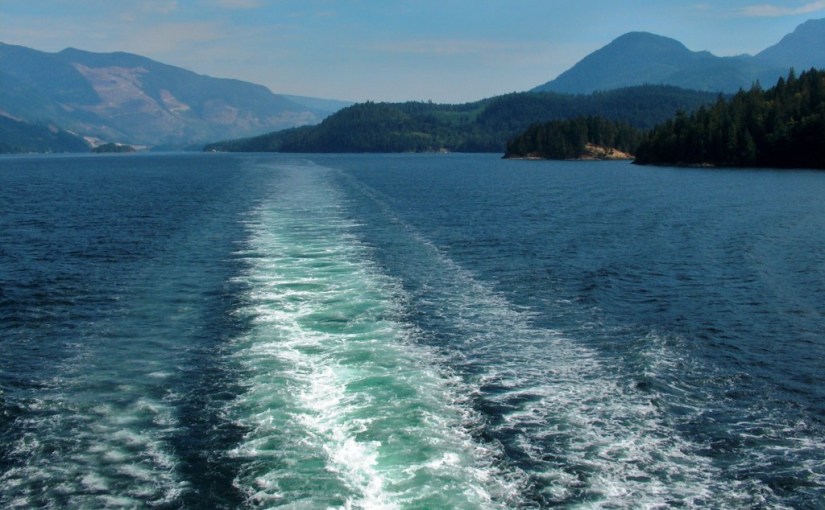 Crossing the Straits of Georgia was written in July 2013 following on from my stay in the city of Vancouver. We then moved over to Vancouver Island. One of the best place in the world in my opinion. Though at the moment my heart goes out to all those suffering from the dreadful heatwave occurring in that region.

After some deliberation as to when to pick up the rental car (early start vs extortionate parking fees) I collected the car from Hornby Street on the Friday afternoon and parked it at the Devonian park (24hrs) which was at least $10 cheaper than the underground car-park closer to the hotel. Parking in Vancouver I must add, is not cheap which is why I chose to use public transport to get around during the week. (Another point for those interested is that car rentals in Canada are much higher than those in the USA.)

We left the hotel early in plenty of time to catch the 10:30 ferry at Horseshoe Bay over to Nanaimo (Departure Bay) as we had reservations (these cost around £15 and not strictly necessary except in peak times unless you have to be somewhere such as the airport!), but if you don’t make that first ferry then you have to wait in line for the next and this can eat up a good couple of hours). £15 didn’t seem to be too much of a hardship for us to be on our way.

I love BC Ferries – they arrive on time, they depart on time and they are easy to drive on and off (particularly important for me whilst struggling to come to terms with a new car and its associated gadgets) then on board you can wander around during the crossing, have a meal, look at the views and if you’re lucky (as we were) see a pod or two of Orcas en route. On our previous visit to the Island we bought a circle ticket for the ferries which allowed us to drive slowly up the Sunshine Coast crossing the fjords by ferry and then over to Comox on the central coast of the Island from Powell’s River. If you have the time I thoroughly recommend this route for its beauty and peacefulness, (but be careful of the “granny traps” at the side of the road in places – deep gullies or drains at the edge – we saw several cars stuck in these and dread to think of the damage to the underside of the vehicle). 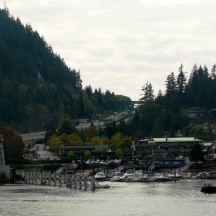 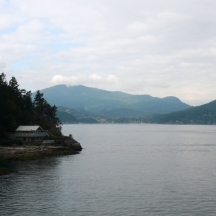 On this occasion we chose to go directly to Nanaimo (home of the famous Nanaimo bar) as we were heading over to the Pacific Rim on the west coast for a few days staying in Tofino, surf capital of the Island. We didn’t bother with a GPS as there really isn’t much need for one on the Island – or so we thought… got a bit lost in Nanaimo as hubby got confused over route signs which meant we went around in a circle and tempers frayed somewhat! Eventually we found the correct route, confusingly there’s a 19 which is the Inland Island Hwy and a 19a the Island Hwy, but since they merge to the north we really had nothing to worry about and could relax and enjoy the scenery.

END_OF_DOCUMENT_TOKEN_TO_BE_REPLACED

We didn’t want to leave the Pacific Rim side of the Island and could easily have spent another week here, especially as the weather was being so good to us. There was just enough time to squeeze in a little more after breakfast. 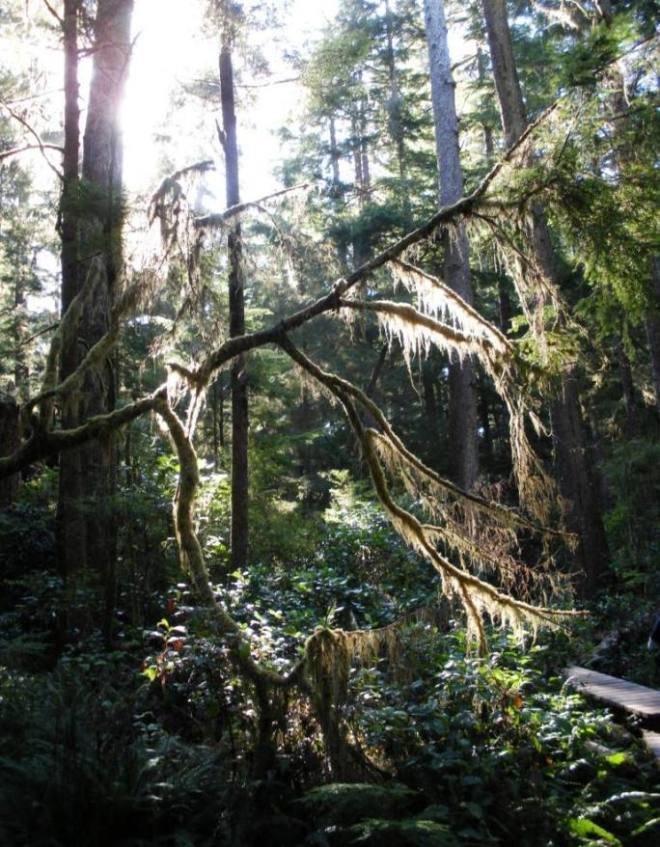 A hike down the Schooner trail was a good wake-up hike as it leads through a lovely mature rainforest with moss-draped trees and a golden light filtering through: the boardwalk with its series of steps and ramps leads to the very scenic Schooner Cove.

This is at the northern end of the very long aptly named Long Beach. By the time we’d walked back to the car our knees had definitely had a thorough work-out and reminded me about it for the rest of the day!

Driving back across the Island towards Coombs we stopped at the famous Cathedral Grove where you can wander around a trail through large Douglas Fir and Red Cedar trees. The trees are massive in MacMillan Park and some are over 800 years old with The Big Tree in Cathedral Grove being 76 m tall (which is 20 m taller than the Leaning Tower of Pisa) and 9 m in diameter. It is an opportunity to see a west coast rainforest, but I must admit walking through forests is not my most favourite thing, although I do seem to do an awful lot of it and I much prefer the ones that lead to a beach! 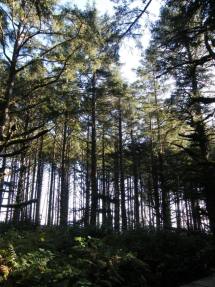 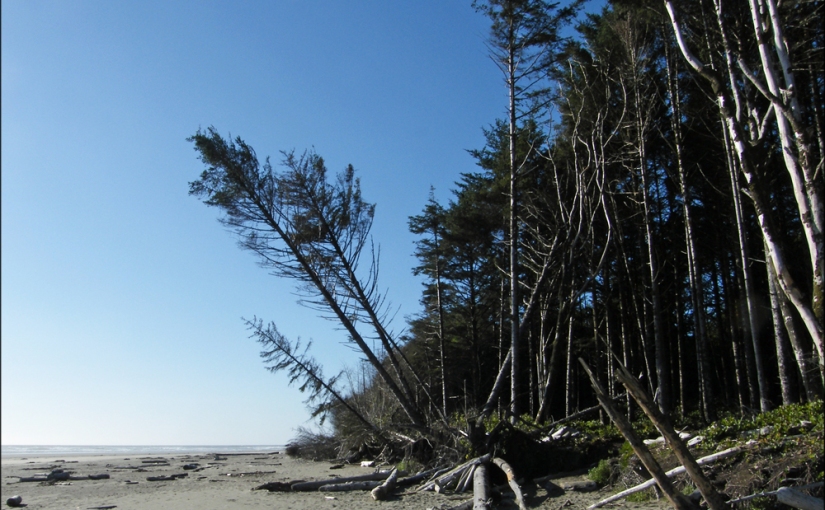 Next stop was Combers beach with a trail through a mature Sitka spruce forest to the beach. Near the beach the dramatic effect of the ocean’s salt and winds can be seen on the stunted trees. Beach access can be tricky due to shifting logs on the fringe of the beach, but well worth the effort as we watched flocks of seagulls rise and dive into the shallow streams for fish. As we left the wind rose and the whole beach appeared to move as the sand shimmered and turned into a flowing river. I have never seen anything like it.

Final stop was Radar Hill with panoramic views over Tofino and the Clayoquot Sound and where we saw our first and only beautiful blue Steller’s Jay.

The evening ended at Shelter for a special meal. Started with a glass of prosecco for me and a cocktail containing Manuka honey vodka for OH who had creamy chowder with mussels followed by chicken breast on lentils, green beans and capers. I had an arugula salad with rocket, green leaves, arugula cheese, blue cheese finely diced, caramelised onions, cranberries and pomegranate followed by a rib-eye steak, yams, green beans and a pepper type sauce and a glass of Bulldog Shiraz from Australia.

The restaurant is very informal and has a large popular bar and TV sets. There was a baseball game happening on one set, but the one closest to us was showing a program about a group of surfers on tour in South Africa! How unreal to be sitting in Canada and following this group of lads on their tour from Cape Town and my beloved Muizenberg to Jeffrey’s Bay, St John’s on the Wild Coast and finally Durban, all with fabulous photography of the beaches and surrounding areas – if only it had sound! The O’Neill Cold Water Classic Canada surf competition in Chesterman Beach was due to be held over the following weekend – a pity we would be gone by then as I would have loved to have watched it.

A great day and a lovely meal to end it with. Tomorrow we leave this part of the island, but have one last walk to do before finally saying goodbye. 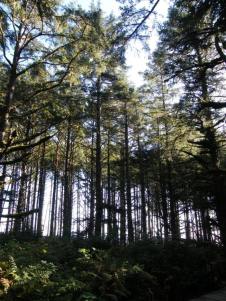 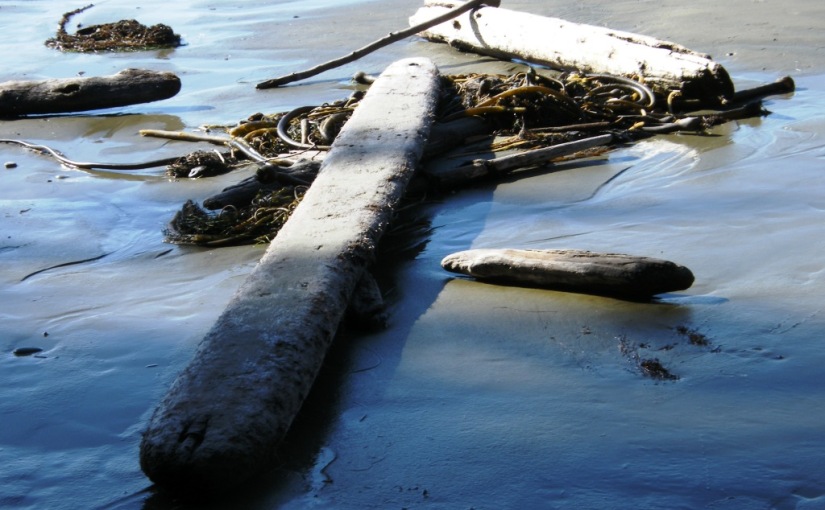 What can I say about the West Pacific Rim? It is as you’d expect: wild and rugged with long sweeping sandy beaches, rolling waves and strong currents, drifting logs and lovely mature rain forests with moss-draped streams, hanging gardens of moss and ferns and twisted, stunted shorepine trees.

If you go outside the main season it is also quite isolated and apparently a lovely place for winter storm-watching.

We spent some time walking along Wickaninnish Beach at the southern end of Long Beach (sadly the Interpretive Centre and restaurant were closed for the season), watching huge cormorants diving for fish and the waves crashing onto the windswept sand. The beach is an explorer’s delight. Its location at the southern end of the 16km stretch of Long Beach allows it to act as a damn – collecting flotsam, jetsam and driftwood unlike any beach in the region. If you walk along the 1km coast trail to the steps descending to South beach you get a lovely vista of the coast. The pebble beach here is famous for the musical sound of the stones rolling in the surf. The longer 3.8-kilometre Nuu Chah Nulth Trail follows a path of raised wooden boardwalks through the dense rainforest towards Florence Beach. 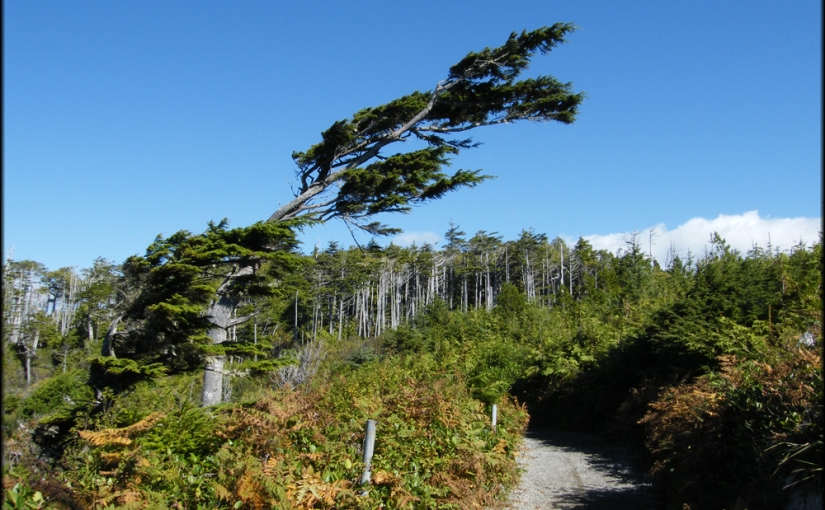 A special day as it was both my birthday and wedding anniversary, so we had reserved a table at another S restaurant – Shelter which is opposite Jamie’s – and supposedly the best of the bunch. Meanwhile we had a day to fill and try to walk off some of this heavenly food we had been indulging in.

We decided to drive down to Ucluelet and walk around the Wild Pacific Trail then work our way back to Tofino stopping off at several of the other trails on the way.

The name Ucluelet  is derived from a Nuu-chah-nulth word meaning a place of safe harbour. The Nuu-chah-nulth are a group of first nations whose traditional home is in the Pacific Northwest on the west coast of Vancouver Island. We first had to stop at Cynamoka Coffee House on Peninsula Road for a coffee as we remembered them as being exceptionally good. On the previous occasion we had obviously parked on the roadside. This time we blindly followed a truck up the hill to the café and found ourselves at the top of a very steep incline only just managing to avoid a very nasty pot-hole. Climbing out of the car I looked around at the other vehicles – all of which were very high rise 4WD trucks – I nervously walked to the top of the exit slope. The driver of the truck next to me leaned out of his window and advised me to go v-e-r-y slowly at the bottom or “you’ll rip the bottom out” and looking at the grooves in the tarmac at the bottom I believed him. Hey ho, not a lot I could do at this point except to wish the car had blades so I could exit vertically, so to avoid a panic attack we went inside for a much needed glug of caffeine.

You’ll be pleased to know that I did manage to keep the car in one piece, but it was not an experience I wish to repeat.

The Wild Pacific trail loops through a mossy rain-forest which leads to the wonderful windswept coastline with dramatic views of Barkley Sound and the Amphitrite Lighthouse. There are great vistas all along the loop which is 2.6 km and we were fortunate to spot a bald eagle perched high in a pine tree observing his surroundings. 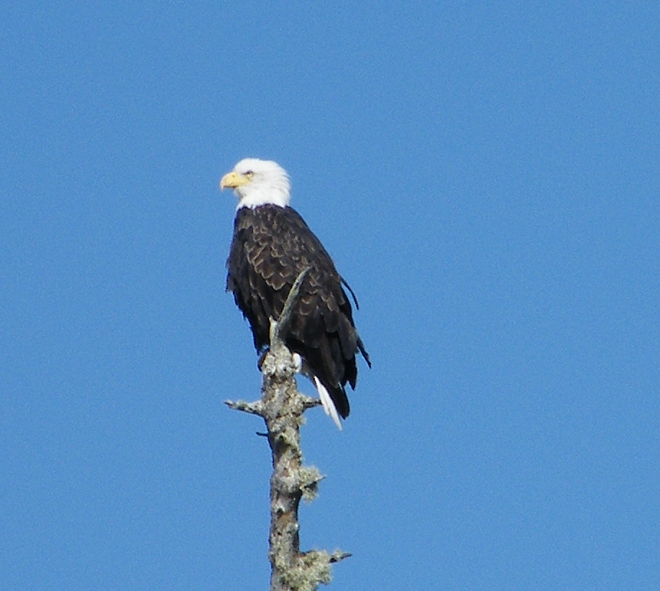 Caution: You may encounter bears, cougars or wolves anywhere on the West Coast. 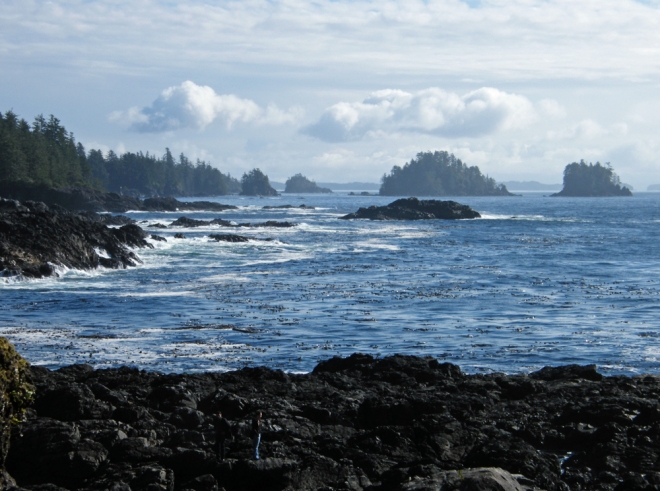 Had I realised just how big these black bears are I would have been more anxious at walking the Nuu-chah-nulth Trail (formerly the Wickaninnish Trail) which had one of theses signs across it back in 2005. Fortunately we didn’t see one on this trip and although I’d like to see a cougar probably not face-to-face. 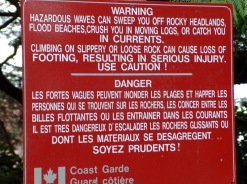