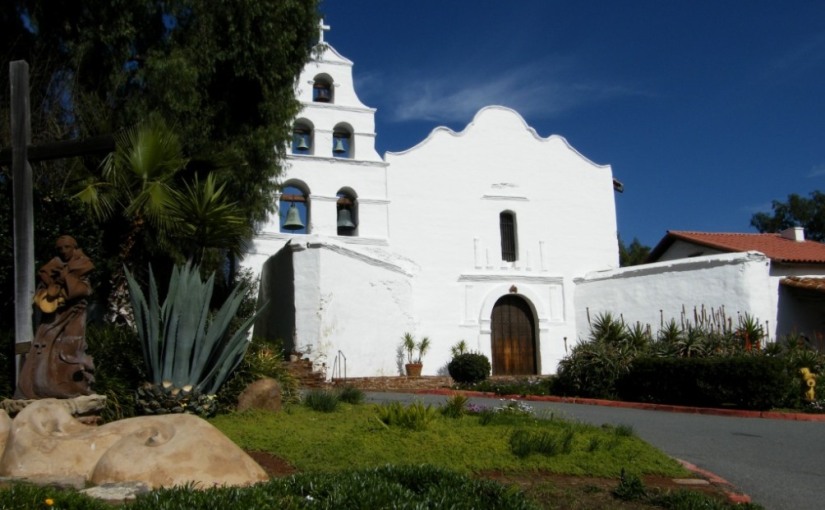 During my visits to California I have become interested obsessed with the Californian Missions. I have previously written about one mission in San Francisco – Mission Dolores – but want to tell you about a few of the other 21 missions I have managed to get to beginning with the first mission in San Diego. I enjoy visiting them because they represent a vibrant chapter of California’s past, they are tranquil spaces, often in large conurbations and often combine my love of architecture and gardens.

They are all located on or near to Highway 101 which roughly traces El Camino Real (The Royal Road) named in honour of the Spanish monarchy which financed the expeditions into California. The first section was made between San Diego and Monterey Bay by General Gaspar de Portola and this route was then used by missionaries, settlers and soldiers as  it was the only road between the few civilized outposts. The road was identified with the missions because the padres maintained the highway and offered hospitality to all who travelled along it.  When California became a state in 1850 the road served as the north-south stagecoach route. In  the 1920s bronze mission bells were placed along the highway to let motorists know they were travelling on the historic El Camino Royal. I like the idea of following an historic trail and exploring this once untamed wilderness.

The missions have been reconstructed and renovated after negative effects of time, weather, earthquakes and neglect and most still serve as active Catholic parishes with regular services. Many have booklets for self-guided tours which include the mission buildings and grounds.  If nothing else they serve as an excuse for a few stopovers whilst in California.

The first mission was founded in San Diego in July 16 1769 by Junipero Serra and re-located to Mission Valley, 6 miles north-east of the city in 1774 to be closer to the Indian Villages, a reliable source of water and better agricultural land. The first church was burned down by Indians in 1775 and the padre, Luis Jayme, was killed. The following year Junipero Serra returned and reconstructed the church and mission buildings, this time using adobe to cover the walls and roofs to make them fire resisitant. The church and other buildings are arranged in a quadrangle around a patio. The doors are replicas made of redwood and the carvings are from actual designs on the originals.

The Cross of Padre Luis Jayme

Entrance to the Meditation Garden

The Patio with Fountain

The church was destroyed again by an earthquake in 1803 and rebuilt with a unique buttress-like structure at the front which has withstood further earthquakes. The mission was given to the Mexicans during the Mexican Occupation of California, occupied by the US Cavalry during 1846-1862 and now serves as a parish church for the Catholic community and a cultural centre for all. For more images of the lovely gardens at this mission please visit Earth laughs in Flowers. 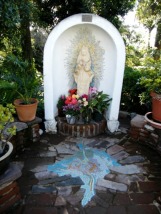 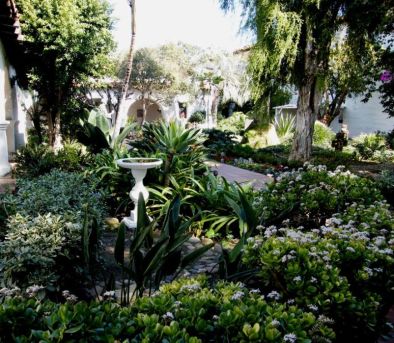 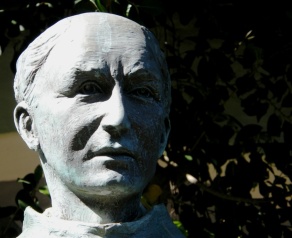 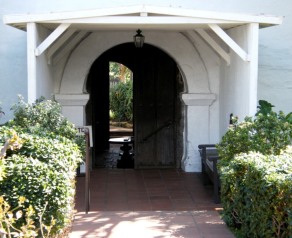 Entrance to the Church from the Meditation Garden 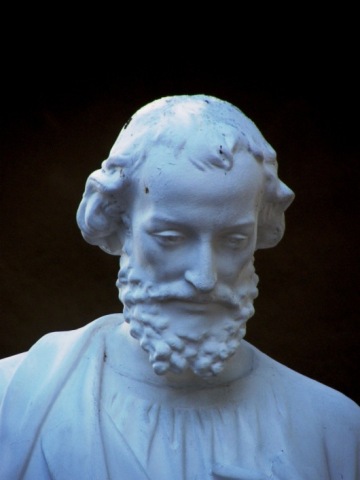 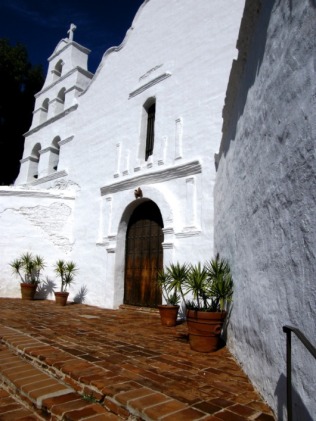