Month number nine already and the summer is slipping away fast. Not that there has been much of a summer in this region, July and August proved to be wetter than average and colder too. No sitting outside on a warm evening sipping a cold Sauvignon blanc. More a case of looking for the bedsocks.

September in Ludlow is Food Festival time when the town is invaded by visitors seeking the perfect sausage on the sausage trail. The three butchers compete to create a new one each year. So far I have only tasted the boar, sage and red currant one but can report that it is VERY nice. In fact some are sizzling in the pan as I write this. If that doesn’t float your boat then there is a Real Ale Trail and Pudding Tastings too as well as many different exhibitors, demonstrations and free samples.

We’ll begin then with a few views of the festival and some of the interesting window displays that shops enter each year. I don’t agree with the results, but what do you think? And I shall link these to Dawn’s Lingering Windows. 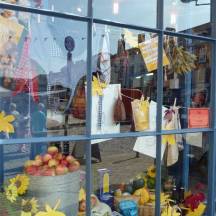 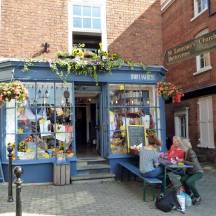 Now for a wander around the town which is a lot quieter than I would have expected on this first day of the festival. But a class of excited youngsters queue up in Castle Square to stroke the ‘dog in the pram’ which makes its presence here every year to raise money for the Animal Hospital.

Local Beer at the Feathers 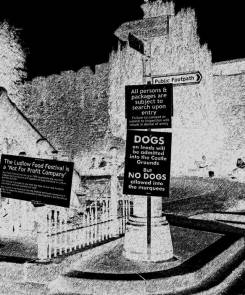 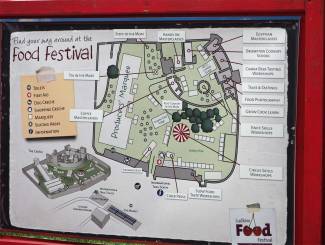 And there are a few people milling around the castle gardens among the lime trees, picnicking on the grass or sitting eating ice-cream on the benches. I notice a few changes in the colour of the foliage as I pass by on my way down to the river. As you can see it is warm enough to do without a jacket today. (And the lime/linden trees are still looking good ET). 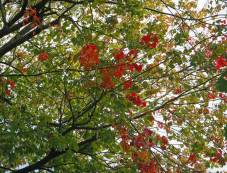 A touch of red

A splash of yellow

And much is the same along the Breadwalk. I’d hoped to find some fungi, but not much of interest was to be seen. Maybe next month it will be a little more riveting in the woodland. Hope you have enjoyed the wander this month and not eaten too much at the festival 🙂

The Cardinal has decided to have a photo project going throughout 2015 – a blogging event, a monthly photo challenge. Find a location near your home, take somewhere between 5-20 photos and post them in a gallery in your blog. Continue to do this every month. The idea is to capture all the changes: the seasons, the weather, different times of the day, some night photography perhaps?