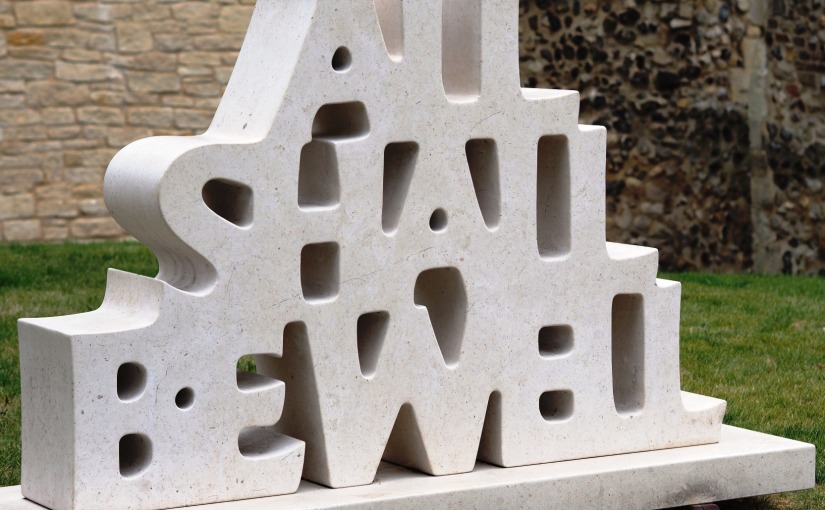 The most complete Norman Cathedral in England and one of the finest examples of Romanesque architecture in Europe, Norwich Cathedral is one of England’s finest Cathedrals and dedicated to the Holy and Undivided Trinity. 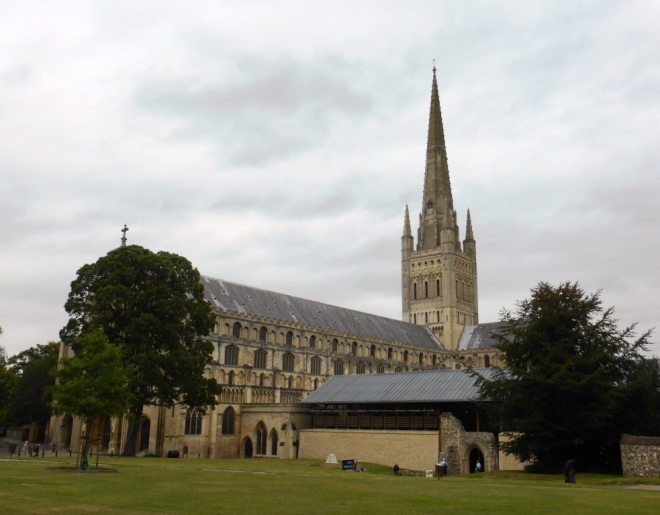 I showed you the two dramatic entrance gates in to the cathedral grounds from Tombland. Now it is time to walk through and have a look at the cathedral precinct which occupies the former monastery. It is very difficult to get the entire building in frame and the addition of a rather ugly visitors’ entrance is not helpful and certainly (IMO) not sympathetic to the 900 year old Norman cathedral.

The Cathedral Close, an area surrounding the Cathedral, contains more than 80 listed buildings. The Upper end of ‘The Close’ as it is known, is a large green space stretching along the west front of the Cathedral. The Norwich School (independent) occupies one end and we were lucky enough to be able to enter the Grade 1 listed school chapel as it was open for the Historic Open weekend. Built in 1316-1320 it was originally a chantry chapel where monks said prayers four times a day to save the soul of Bishop Salmon who was a very rich Norwich bishop. The architectural style is transitional between Gothic Decorated and Perpendicular.

I was particularly taken with the lovely blue doors 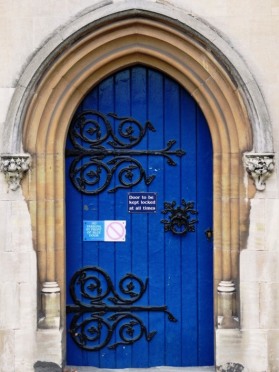 Through the round window

and the ocular windows. For over 350 years the Lyhart porch (seen on the left of the top photo) was the main entrance to the school. The door to the chapel is the original door from the †14c and is the oldest working door in Norwich. 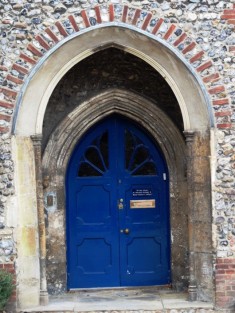 Situated on the large green are two sculptures:

Nelson is of course a Norfolk lad. Born in Burnham Thorpe (north of the county) he attended the grammar school opposite. Originally the statue (by Thomas Milne) was situated in the Market Place but moved to Cathedral Close on April 16 1856. The statue cost £700 but by 1852 subscriptions only amounted to £400 barely enough to pay the sculptor.

The Duke of Wellington (by George Adams) is at the other side of the green,  shown on a plinth decorated with a coat of arms and regimental colours. This was previously also located in the Market Place on Gentleman’s Walk and moved to its current position on January 13 1935. His statue has fared a lot better than poor old Nelson, who shows signs of aging.

The West entrance faces you in all its splendour, but this is not the visitors entrance. Two new statues adorn the main door, we’ll take a closer look.

St Julian stands on the left of the entrance as though turning to face visitors using the main door- her right arm at her side- the left holding her book so that its title is clear. St Benedict puts his finger to his lips to urge silence – the message written on his book

When the Cathedral Dean and Chapter decided to commission two new statues to commemorate the new millennium and the 900th anniversary of the Cathedral’s foundation, they chose St Benedict as the subject of one and Mother Julian of Norwich – a medieval mystic who was the first woman ever to write a book in English – as the other. St Benedict was the father of the Benedictine monastic order, which founded Norwich Cathedral Priory in 1096.

The Norman tower still seen today topped with a wooden spire covered with lead. The cathedral spire, measuring at 315 ft or 96 m, is the second tallest in England despite being partly rebuilt after being struck by lightning in 1169, just 23 months after its completion, which led to the building being set on fire. (Wikipedia)

Next time we shall go and take a look inside the cathedral.

27 thoughts on “Norwich Cathedral Part I: The Close”