On a recent visit to South Yorkshire for family reasons I took time out to visit the YSP near Wakefield. I vaguely remember Bretton Hall as a teacher training college from my teenage years living in Wakefield. Today the park hosts exhibitions both indoors and outdoors as well as permanent sculptures in the grounds.

The way one views sculptures, as with many forms of art, is highly subjective. Some I loved, others puzzled me, but the setting is great and if nothing else you get a good workout walking around the different parts of the park.

Tony Cragg an artist who is now based in Germany has produced many bodies of work and examples here are from Early Forms (based on different vessels such as test tubes, jars, conical flasks) and Rational Beings (based on drawings of people). The sculptures are designed to be viewed differently from various angles and change depending on the perspective of the viewer. 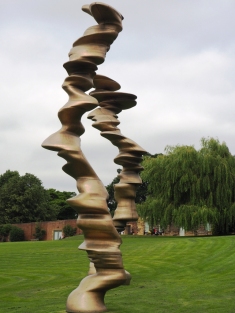 Tread Softly is an Arts Council Collection National Partner exhibition exploring the realities of childhood, developing identity and family relationships.  I was particularly taken by an old gymnastic vault, which took me back to my grammar school days and a particularly strict P.E. teacher. 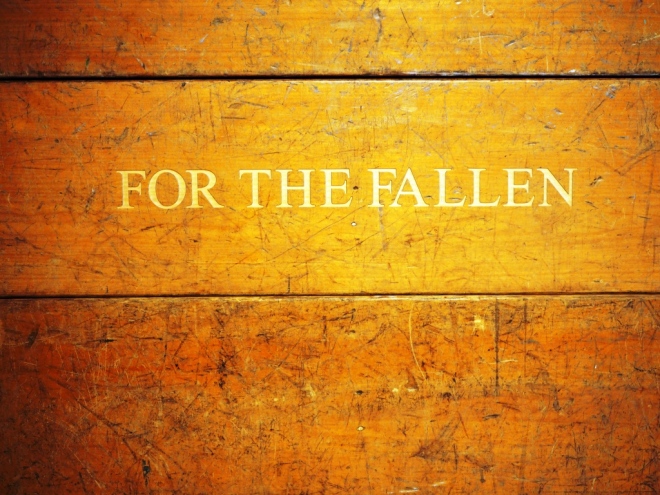 I also liked Barbara Hepworth’s Family of Man placed on a hillside, though being roped off rather spoiled the effect.

I enjoyed the juxtaposition of a real family enjoying a picnic lunch nearby.

Another of my personal favourites is Buddha  by Niki de Sant Phalle, made all the more interesting by the addition of a chap on a ladder taking photographs of the giant sculpture (header) 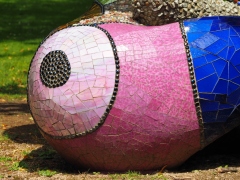 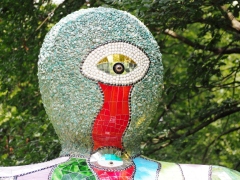 Decorating a hillside in the Country Park section are several bronzes of Henry Moore’s Reclining Figure series that he began in the 1950s, and returned back to again and again throughout his life.

Moore’s preference of the reclining figure over a standing or sitting figure that is usually the subject of artists is down to its strong, yet relaxed posture. He explains that “it is free and stable at the same time. It fits in with my belief that sculpture should be permanent, should last for eternity.” 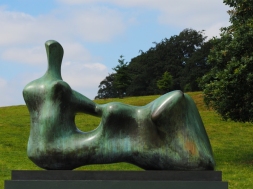 Ai Weiwei’s Iron Tree is a delightful replica of the ancient yew trees found in the Chapel grounds.

and his Circle of Animals / Zodiac Heads is very interesting and has been on a world-wide tour since 2011. For the duration of their exhibition in Chicago all the heads were hooded, to remind people that the artist himself was still confined to China after being arrested for ‘economic crimes’. In 2016 he was granted permission to travel to Prague and see the sculptures for the first time.

Apart from the sculptures, the park is a very pleasant place to stroll around with walks around the lake, split into two by the Cascade Bridge which is where we will begin part two.