Manly is named after the Aboriginal people first encountered on the shores of Port Jackson in 1788. Due to its remoteness from Sydney it was not developed by Europeans until the mid-nineteenth century when a ferry service was introduced. Over the subsequent years Manly has undergone countless changes in its environment. Fortunately there are many fascinating buildings and parks that have been retained and the Heritage trails have been created to take visitors from the harbour beaches into the centre to appreciate Manly’s history. 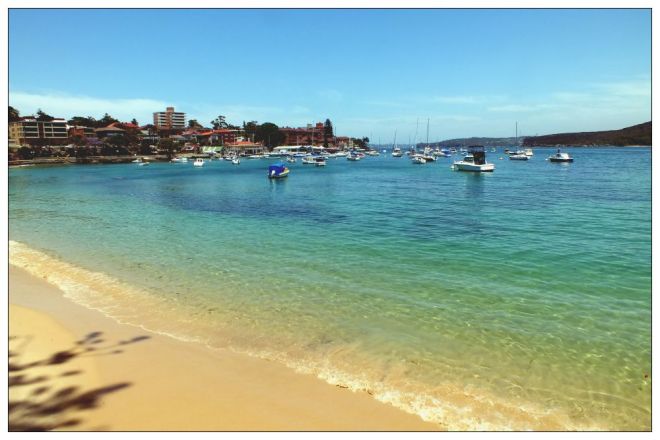 I started on this trail from the East Esplanade on a very hot day in November. Under a large Moreton Bay fig tree is an interesting plaque that informs you about the first inhabitants of the Manly area who were the Aborigines known as the Kayimai. They lived as hunter-gatherers, roaming according to the seasonal availability of food and trading with other clans. They moved around, making shelter as needed from branches and fronds or using the many sandstone caves in the area. 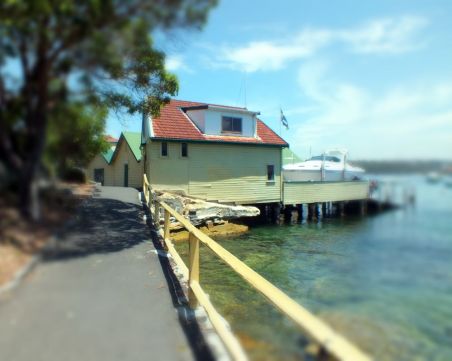 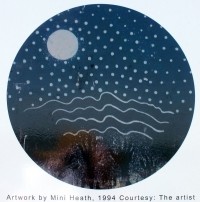 Following the path around the corner you find the Manly Cove Launch Club, established in 1937. Next to it stands the heritage-listed Manly Rowing and Sailing Club Boatshed. Established in 1875, this was one of the earliest waterside clubs in NSW. Carry on up the steps and right on East Esplanade to the corner of Stuart Street. Walk up Stuart Street to the junction with Addison Road, the second road to your right.

The road has been planted with an avenue of Norfolk Island Pines and mixed with Port Jackson Fig trees (smaller than the Moreton Bay fig) and was first planted in 1882. It provided the most welcoming shade on this hot day as I wandered down the road peering over fences to look at the homes.

Here are some excellent examples of different styles and periods of architecture. There are Italianate, Victorian Villa, Federation, Interwar Spanish Mission, Old English, Californian Bungalow, Post-war International, Late Twentieth Century, and Post-modern architectural styles! I’m not expert enough to be able to identify them, but I do know that there are several very interesting features that I admire.

Could this be an example of Post-war International? 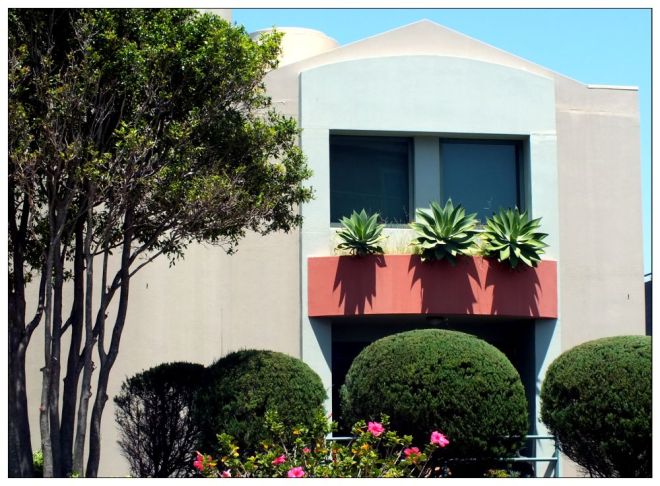 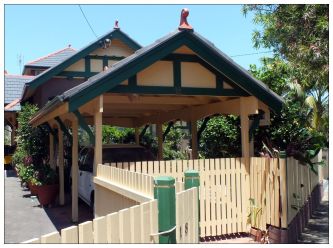 At the end of Addison is a path onto Manly Point ‘Peace Park’, an area now a Little Penguin Critical Habitat. A plaque close by reads:

“World peace begins in the hearts and minds of each individual – may we each seek harmony and peace in our daily lives. “ 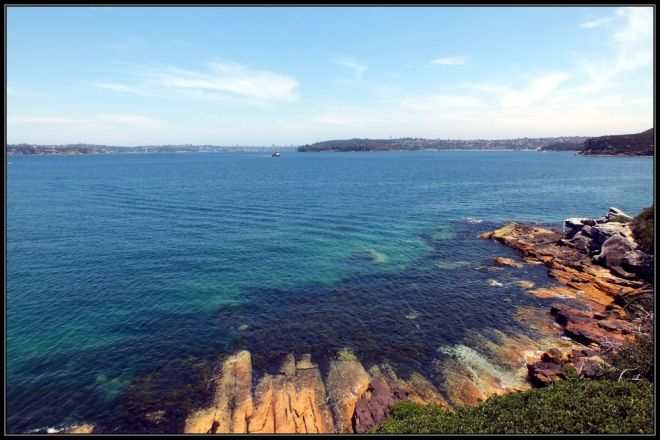 A couple of metal benches provide a resting place with a view over to the Quarantine Station and across the bay to Middle and South Head and where I sat and watched the Manly ferries pass by. Even if you are not interested in architecture it is still worth walking to the end of this road for the views.

Retracing my steps I passed this imposing white building which was dressed for Christmas with beautifully designer wreaths and ribbons. 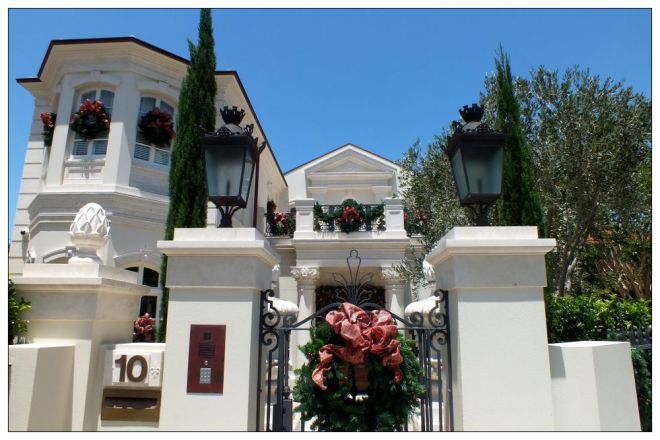 The grey and white decoration on this house (California Bungalow?) is perfectly framed by this wonderful gum tree with its peeling grey bark revealing a chalk-white trunk. Even the white lilies match. And just look at that fretwork above the windows! 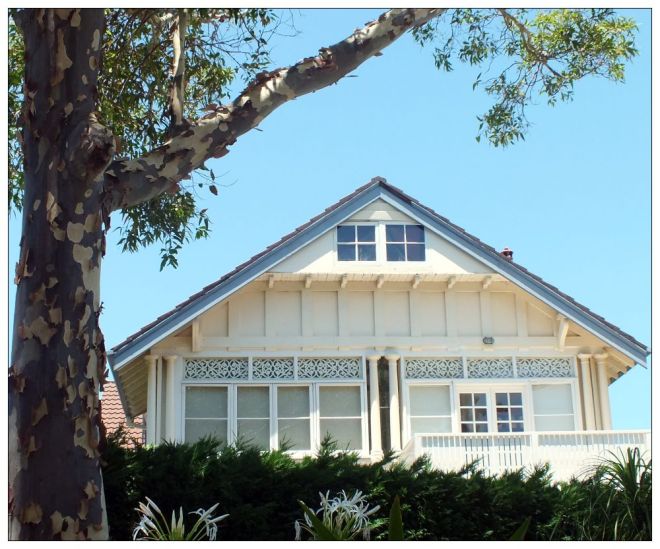 And this one has interesting gables and windows. Lots of straight lines going on here.

I’d love to see inside some of these houses.

Returning to Stuart Street I turned right, then right again into Craig Avenue for Little Manly Beach. Here I walked along the beach to the Kiosk where I could get a much-needed drink, and decide where I went from here. My intention was to continue to Little Manly Point and follow the trail around Spring Cove to Collins Beach and possibly visit the Old Quarantine Station, but given the soaring temperature and the fact that storm clouds were fast appearing on the horizon, I decided to cut across Marshall Street (this area of Manly reminds me of San Francisco with all the steep hills).

Observe the chimney pots on this house on Marshall Street and the lovely 3D bargeboard on the gable end. Not to mention that wonderfully scrolled wrought-iron balcony and the arched windows.

I cut through the grounds of St Patrick’s (the International College of Management, Sydney is now located in the former St Patrick’s Seminary) and down several sets of steps which brought me out onto College Street.

From there it was an easy stroll down Bower Lane to Marine Parade near the swimming pool and Mambo Coffee shop and make my way back to the esplanade. Just before the storm broke!

I noticed some very interesting windows along this route: 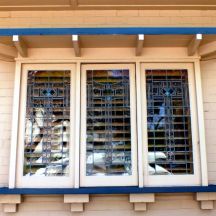 When walking an historical trail like this one it is important to pay attention to the details you see along the way. That might be a picket-fence post, a barge-board, a colourful tile, an interestingly shaped window, or some stained glass or gable ends. 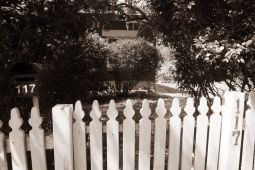 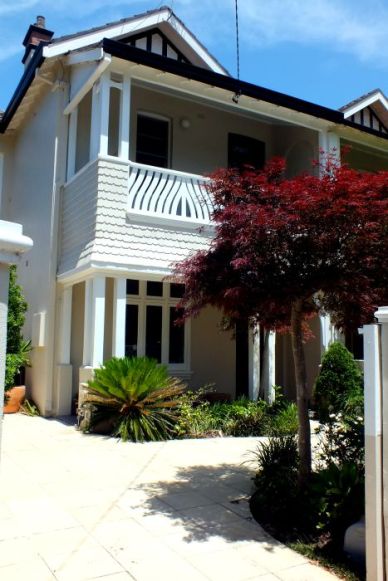 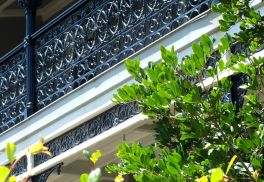 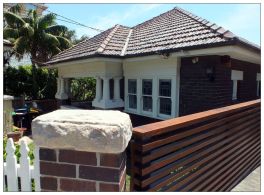 …and maybe there are some Australians (or architects) out there who can help me to identify the different styles.