I was beginning to think I would never get any frost or snow photos of Ludlow. The last time I saw a really hard hoar-frost was several years ago. Then on Wednesday I awoke to a beautiful softly coloured sunrise – and frost!

Not only was there a hard frost, but also fog diffusing light. An ideal time to grab the camera and wander down by the river.

Excited by the thought that I might find some rime ice on leaves and trees I first went down to the river by the Mill Weir, where I hoped to get a view of the river and the trees along the Breadwalk. Because the sun was coming from my left, the trees were in darkness with just a glimmer of gold on my side of the river. 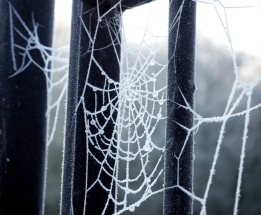 The frozen spiders’ webs were beautiful in their intricacy. Of the spiders there was no sight. Leaves looked as though they had been dipped in sparkling castor sugar.

I made my way down Camp’s Lane to the river at Dinham bridge. The low-slung sun and the fog created a softly focused golden light. Everything in the shade was cold and dark, whereas in the sunlight everything was warm looking. Don’t be fooled by that deep blue sky and warm red brick. It. was. cold.

The trees, dusted with icing-sugar, sparkle as the sun’s rays reach them.

As the weather had been very wet in recent weeks I did not want to walk around the common or the river and it was too late now to capture the view of Ludlow in the frost. I went to see the ducks who were busy arguing down by the Millennium Green, shoving and pecking each other to get to the bread being distributed by one hardy family out in the cold.

I decided to walk back to the town via the castle which was now bathed in sunlight. Despite it being only early afternoon, the long shadows made it feel much later. Frost still clung to those places untouched by the sun. 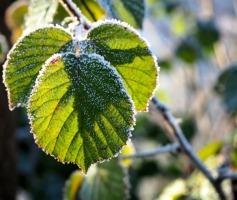 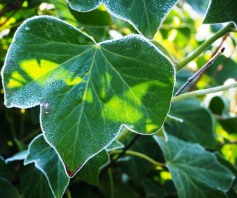 The castle garden, with its benches and lime trees, was empty apart from the young couple (seen above) who were cuddled up together on one of the benches – I don’t expect the seat was very warm! 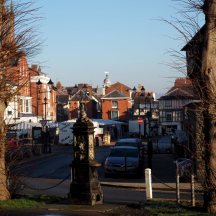 Looking to the market 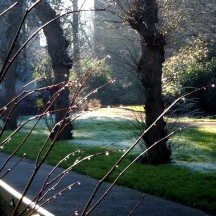 Where the sun had reached the whippy branches of the linden trees the frost was thawing and sparkling diamonds of water dripped to the ground. My lips were blue, my fingers numb. Time to head for home and a mug of hot chocolate with a large tot of brandy.

The Cardinal is continuing his photo project throughout 2016 – a blogging event, a monthly photo challenge. Read his blog for the new rules this year (he is running two versions) and to view his interpretation and those of other participants.

And because I haven’t quite finished my next post about Shrewsbury I shall link this to Jo’s Walks. I’m sure the Cardinal and Jo don’t mind sharing 🙂