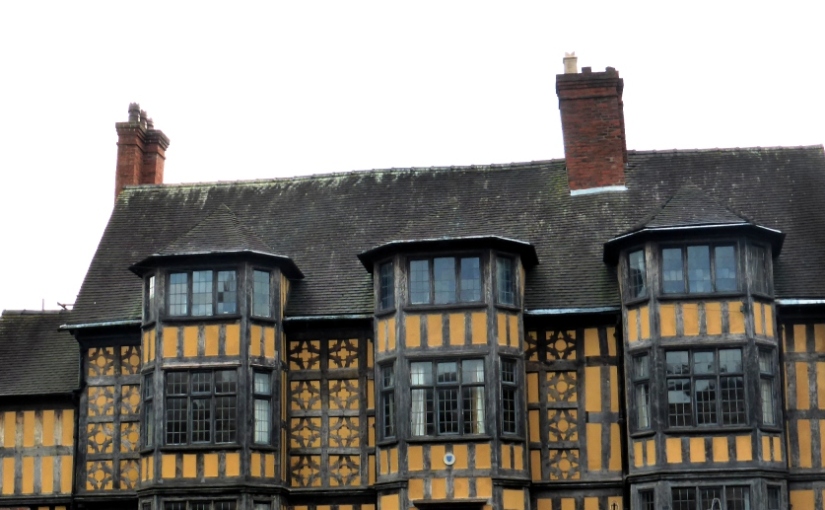 Today we are going to follow the blue path around town, starting from the Bear Steps (1) heading to the railway station. (The churches, station and library appear in ‘Looking at stone buildings‘) 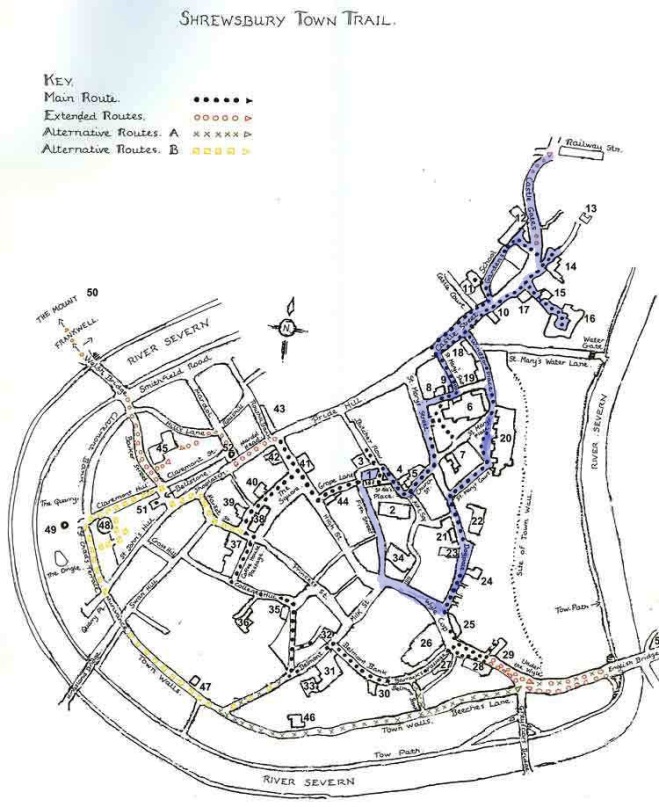 The Bear Steps (1) is in the centre of town and named after a pub that was opposite the steps. 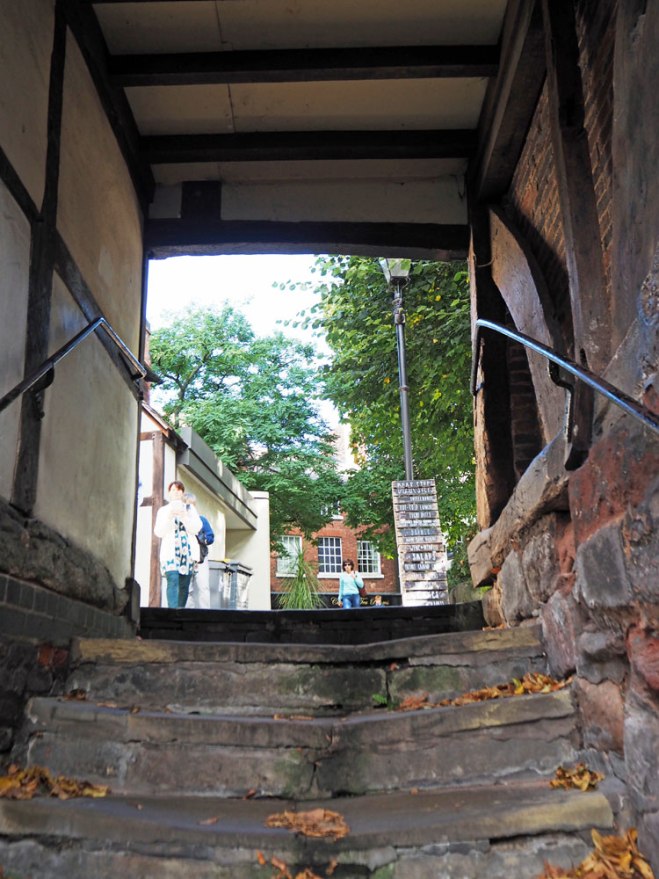 This place has a family connection as the OH’s eldest uncle was born in one of the small cottages back in 1913. The Bear Steps hall is one of only a few remaining medieval stone and timber-framed halls that dominated the town’s architecture. It now houses the offices of the Shrewsbury Civic Society (who produce a Shrewsbury Town Trail booklet and from which much of this information has been gathered) an Art Gallery and Coffee Shop. 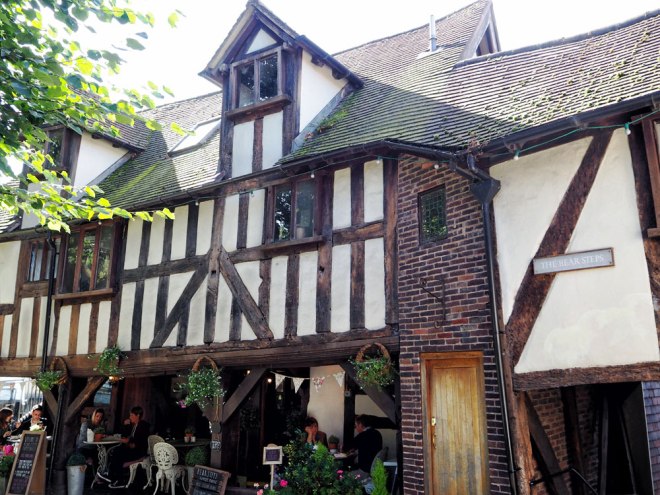 St Alkmund’s Place (2) is a quiet square dominated by the church, of which only the tower remains of the medieval structure. The windows have been restored in recent years using hand-made glass. 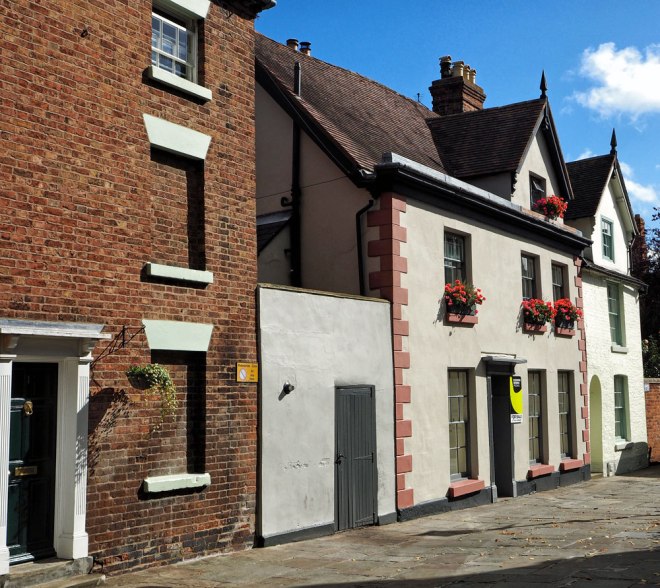 Turning left into Church Street you find two inns, Prince Rupert (5) and The Loggerheads (leopards). Facing you at the end of the street is the magnificent Church  of St Mary the Virgin which is no longer in regular use, but is the only medieval church in the centre of the town and built on an earlier Anglo-Saxon site. It contains some beautiful stained glass from other places, including Europe, including a world-famous fourteenth century ‘Jesse window’ filled with figures of Old Testament kings and prophets.

Opposite St Mary’s (6) is the Draper’s Hall (7) built around 1575. The Drapers were powerful members of Shrewsbury society with a monopoly over the border cloth trade. The decorative motifs, an early example of the Shrewsbury style, are seen in the cable moulding in vertical sheaths and sunken quatrefoil panels in the main timbers. The distinctive school of carpentry found in Shrewsbury’s timber-framed buildings of the late 16th century include the use of short ‘S’ curved braces to strengthen the frame, the carved timbers to form cable moulding (twisted shafts) and sunken quatrefoils (circles and cusps). The (former) Plough Inn below is a good example of the craftsmanship. 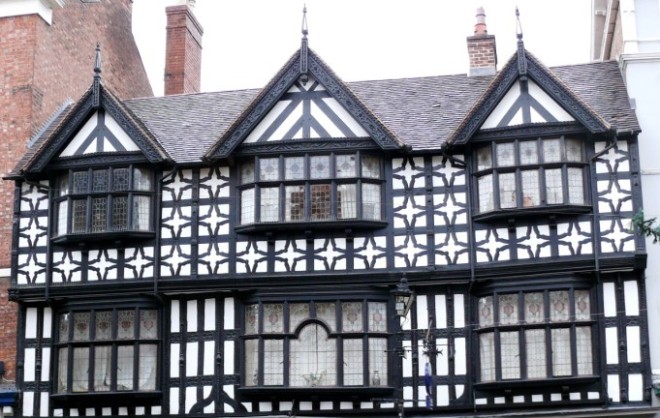 On the other side of the church is Yorkshire House (8) formerly No.2 Olde Yorkshire House Inn, an early 19th century brick casing fastened to an earlier, warped, timber frame. 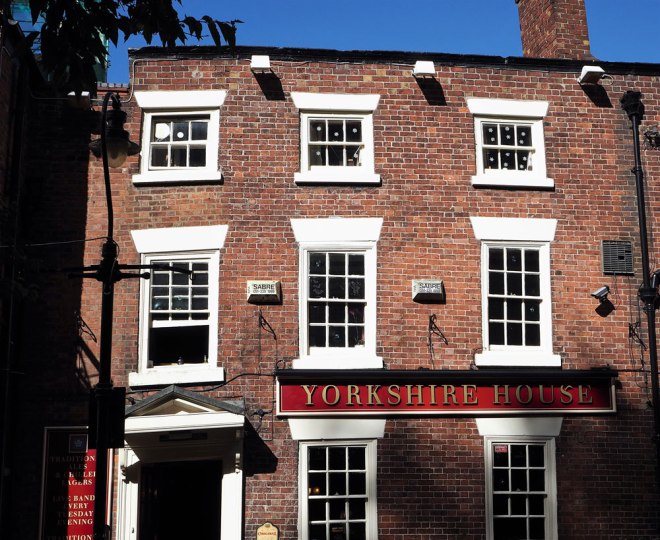 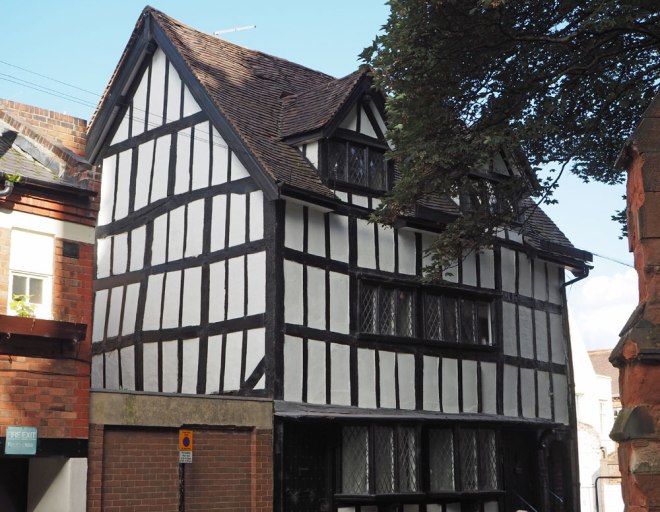 Cut through Saint Mary’s Shut, the narrowest in the town and onto Castle Street, turning right. Ignore the unattractive early 1960s shops and arcades and walk down Castle Street towards the Library and the Railway Station. On your right you can see a typical Jacobean Town House (10) known as Charles Groves, a previous vendor, with its single-bay. 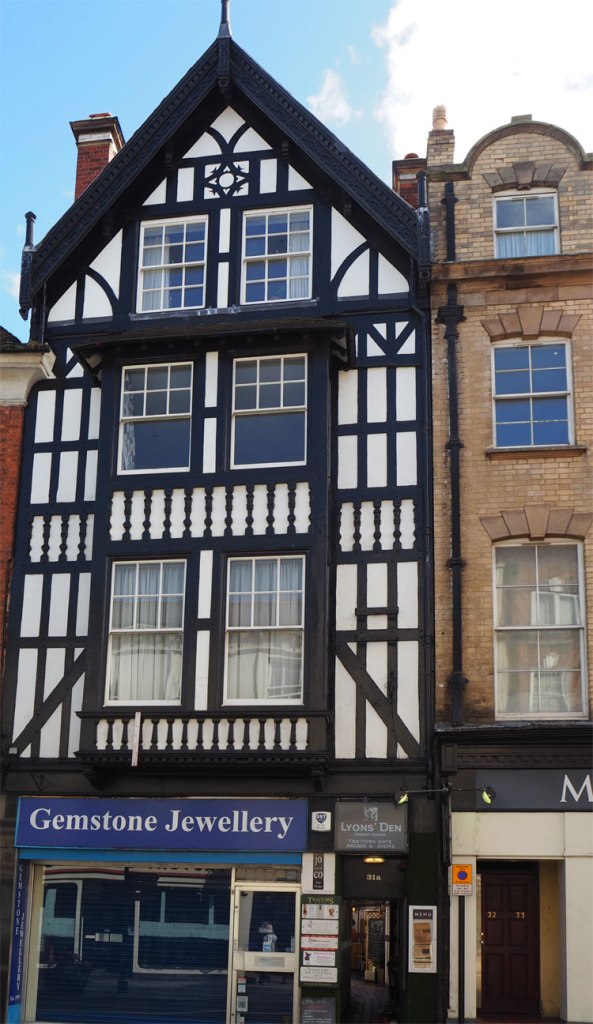 And a couple of buildings down, the Adam style classicism of the Shrewsbury Industrial Cooperative Building. 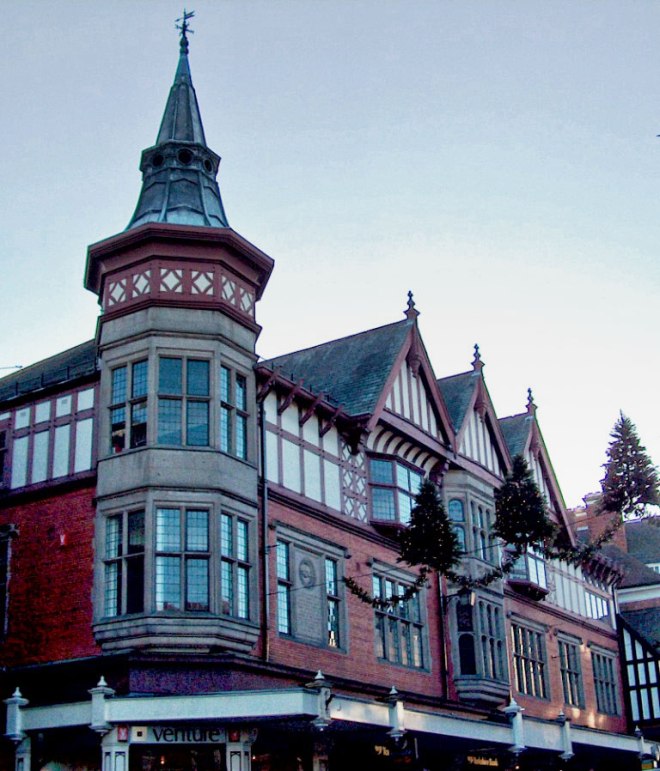 A little further on, stepped back from the road, is the Council House Gatehouse (15) a flamboyant Jacobean style from 1620 depicting new Renaissance styling in the form of pointed windows and star panels and without the distinctive Shrewsbury sunken quatrefoils and cable mouldings. Above, one of the roof finials originally had a key, a symbol for a prison. 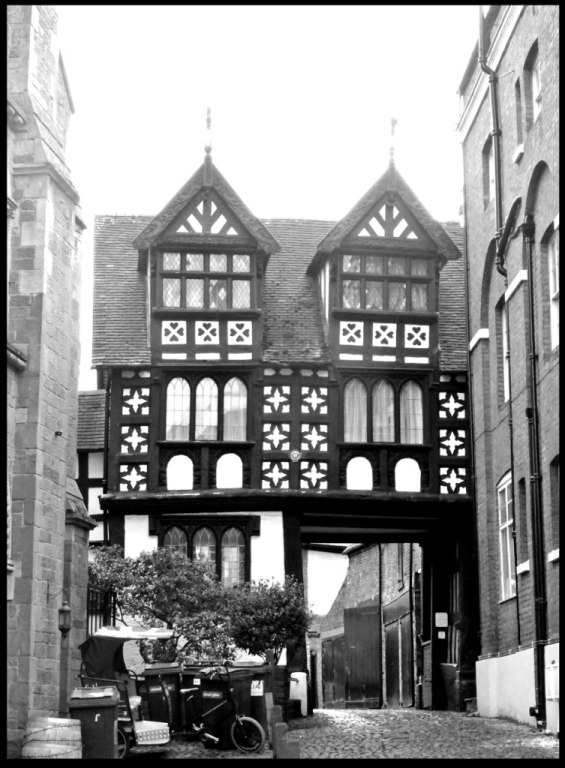 In front of the Council House Gatehouse is the Norman-styled, Victorian former Presbyterian church, St Nicholas.

Castle Gates House (14) used to look rather Victorian until recently, but dates from the early seventeenth century and was actually built in Dogpole and dismantled to make way for Newport House. It was re-erected here in 1702. Until recently it was painted white (below) with false panels, but all that has been removed to reveal the yellow ochre and splendid timber-frame. If you want to visit the castle, continue straight ahead.

Now continue down the hill on Castle Gates towards the station and you will see another interesting building on your left. This is now being used as the County Council Community Hub (formerly the Shropshire Archives) and is a late C17 early C18 timber-framed building. Outside the building, in the courtyard, is a mosaic showing the historic extent of Shropshire with a leopard and the county motto “Floreat Salopia” / “May Shropshire Flourish“. The area where the building now stands was formerly “Blower’s Repository” (for furniture) and is located just below the main Shrewsbury Library building. Steps lead down from the courtyard to the town’s bus station further down the hill. And a little further down on your right stands a black and white building on the corner near the station, with the castle behind. It is obviously an Edwardian building rather splendidly built in the style of the earlier timber-framed buildings. 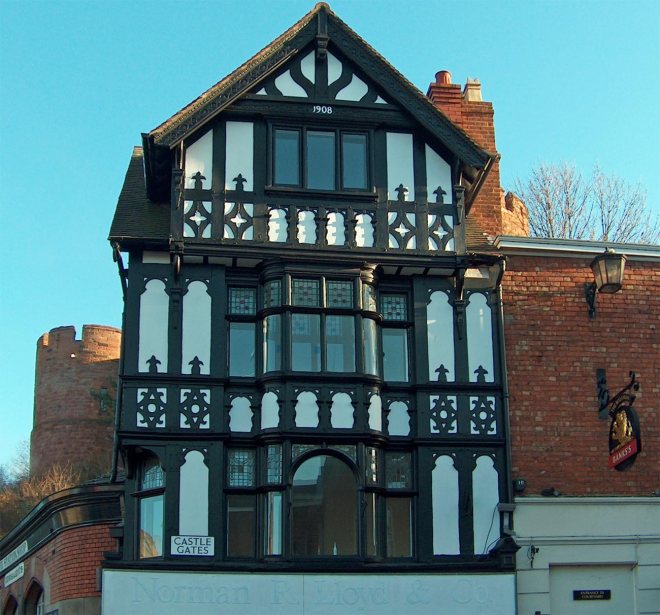 At this point we shall retrace our steps back up to Castle Street and head back towards the library with the impressive statue of Charles Darwin in pride of place. 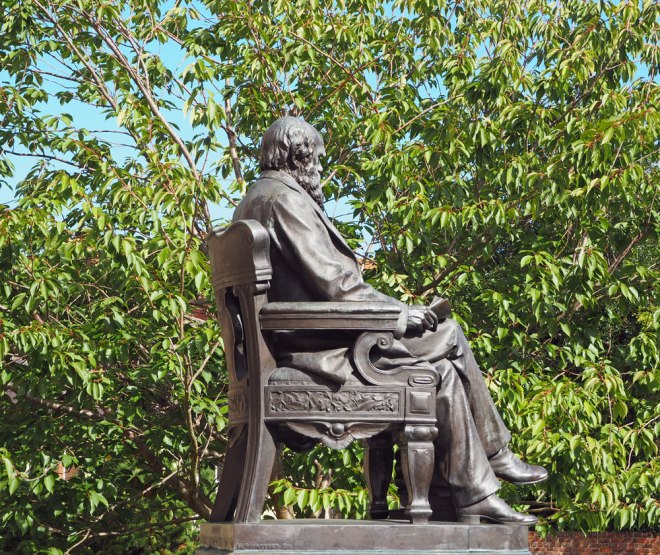 Carry on along School Gardens where you will pass the pretty pale blue painted Old School House and buildings which were originally built in 16C originally part of Shrewsbury School, but extensively remodelled in 1818. 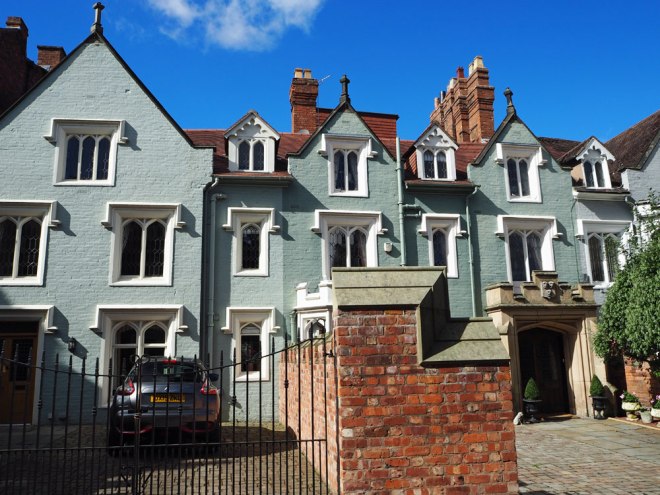 Reaching Castle Street once again, cross over the road and enter Windsor Place with Windsor House (18) (19) on your right with its unusual Curved coped gable walls. Built in the late 18C with Welsh slate and plain tiled roofs it now house offices.  The interior is an almost complete late C18 interior, the central staircase with alternately turned and twisted balusters, swept moulded rail, carved tread ends and dado panelling. 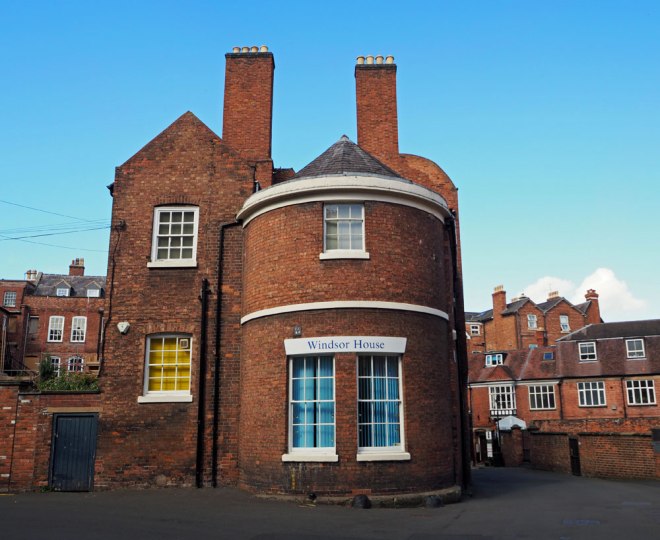 Continue in to St Mary’s Place behind St Mary’s church where you will find the former Nurses’ Home, dated 1910, which has now been converted into flats and named Watergate Mansions. 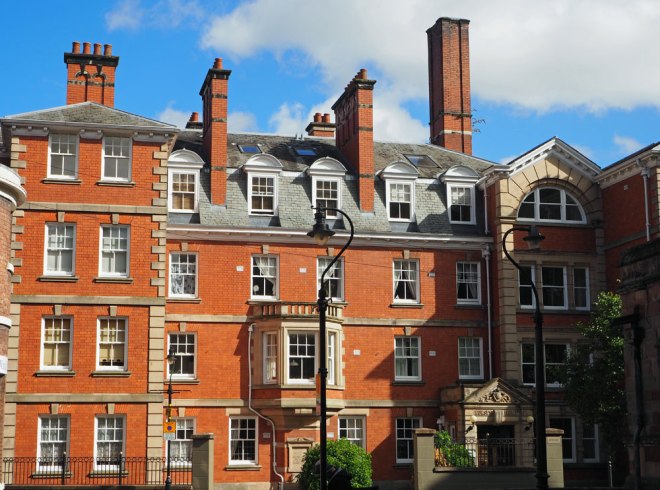 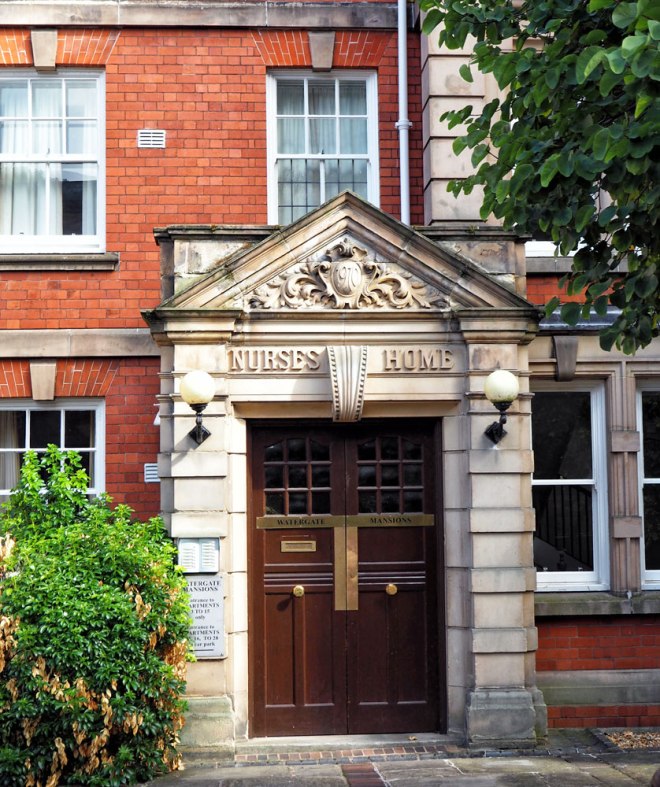 Next door is the former Royal Salop Infirmary which was built as a subscription hospital for the people of Shropshire. Work started in 1826 and was completed by 1830. The architect, E.H. Haycock, designed the building in ‘Greek Revival’ style, of which he was a master. It is now the Parade Shopping Centre (20) 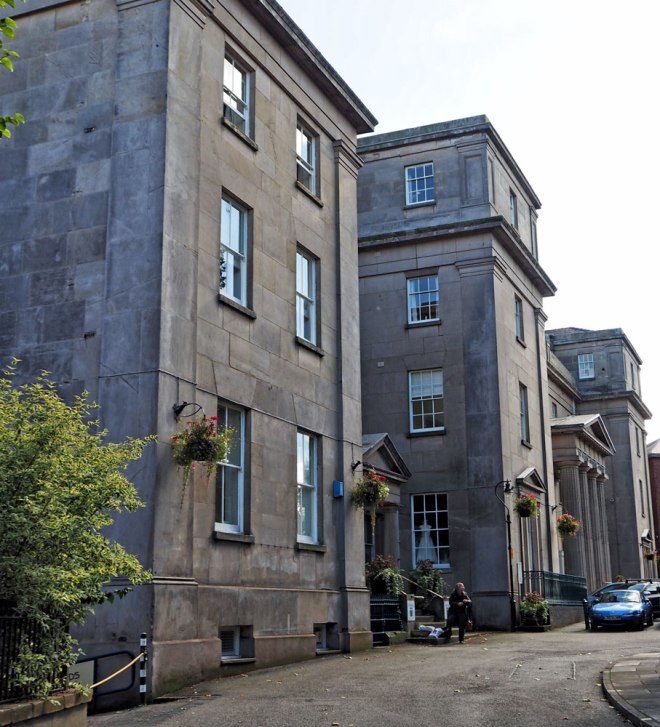 Crossing in front of the Parade Shopping Centre and into St Mary’s Court Passage turn left onto Dogpole and down the hill. Did I mention that Shrewsbury is quite a hilly town? Old House (24) on the left is a 16th century timber-framed mansion built around a pretty cobbled courtyard. The moulded wooden doorcase is typically Elizabethan. Mary Tudor is reputed to have lodged here. 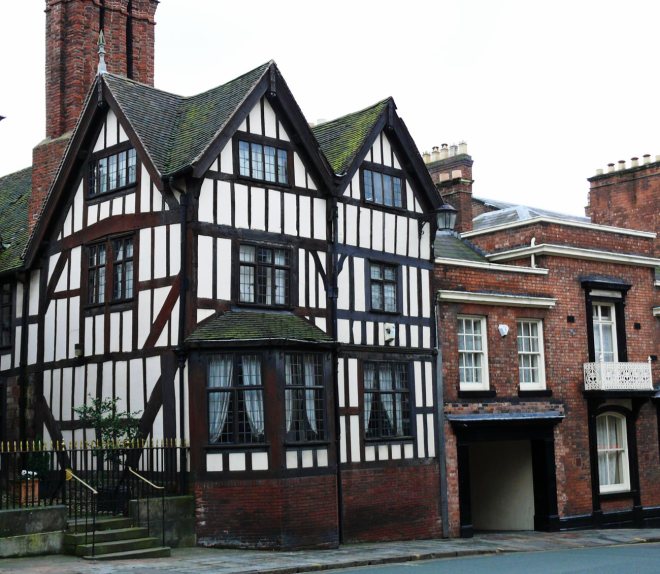 At the bottom of Dogpole turn right into Wyle Cop (we will have a look at this street on the next trail) and return to the Bear Steps along Fish Street, passing by St Julian’s on the right.

Have a look at some of the buildings you pass, including the lovely red-bricked herringbone timber-framed on the corner of Milk Street and just around the corner is the Old Post Office a beautiful Grade II listed half timber building.

[I had hoped to return to the town and get some photos of some of the missing buildings, but time and weather have conspired against me. As my time in Shropshire is now limited, due to an imminent move to Cornwall, I thought it best to post these walks now.]

Edit: I managed to return to Shrewsbury in September 2016 and get some more photos on a much better day!