We arrived in Scotland today. It was a little misty…

but beauty can still be found.

I have been wanting to get up and take a photograph of the sunrise this week, but the weather has not been playing ball. Each morning that I have struggled to be awake this early (and those of you who have read my previous post for this project will understand that I am so NOT a morning person) it has been misty and the sky a total white-out. Not even a glimmer of colour in the east.

Light in the east?

As we are coming to the end of this time-frame, and I am already awake, I’m going to show you a bit of the area behind my house as well as the usual glimpse of in front. I live in a very quiet area in the old town of Ludlow and surrounded by quite a few holiday homes, so a lot of the time the houses nearby are empty.

Until a year ago there was a fully functioning pub to the left of me which was run by the Royal British Legion and the home of the Royal Antediluvian Order of Buffaloes‘ Lodge and things weren’t always quite as quiet then what with live music and noisy punters; talking (why do people talk so much louder when drinking alcohol? An interesting correlation between the volume of liquid consumed and volume of speech), arguing and sometimes screaming, who were outside in the smoking zone that was practically beneath my bedroom window – that wasn’t great. But there was also a well-tended allotment with runner beans, cabbages, onions etc. and a sweet little home-made lean-to potting shed against the red-brick wall which was rather nice. Sadly this year with the closure of the pub the allotment has been unused and nature has taken over. This has meant poppies have flourished and all matter of wild-flowers have grown. 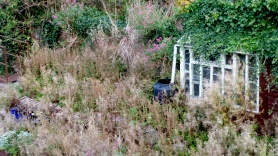 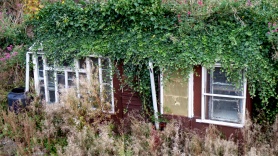 The demise of the potting-shed

When I started entering this project it was May and the blossom was just beginning and it was the time of the Spring Fair, now it is autumn and colours are fading and we have just had the Autumn Food Festival – where has the summer gone?

Lisa of the blog NorthWest Frame of Mind has decided to run a different project over the next 24 weeks. To try to show what is happening in different parts of the world (if you all join in) at a particular time of day. If you would like to participate you have until next Saturday midnight to post a photo or write about what is happening in your part of the world.   This week is between 07:00 – 08:00.  I hope you’ll join in! See links for more details.

Only a few more hours left!

Ailsa of “Where’s My Backpack?” likes to linger in the MIST this week. If you would like to join in with her challenge then please do. Everyone is welcome.

Thinking of misty times takes me back to my first visit to Canada in 2005 and more specifically to Vancouver Island. Way up north on Cormorant Island in the Queen Charlotte Strait lies the historical village of Alert Bay. Home of the ‘Namgis First Nation a former thriving fishing community and now a centre of Native art and culture as well as orca whale watching tours and fishing. 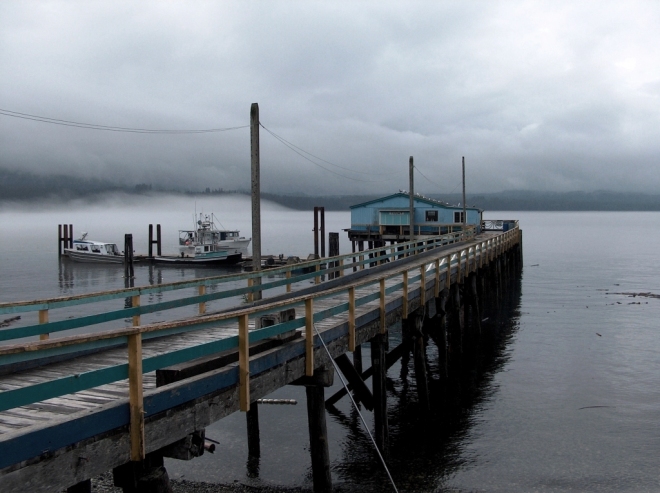 Although it was still August here the weather was distinctly autumnal with its “SEASON of mists and mellow fruitfulness!”

As the cloud descended over the far shore and the fog rose above the ocean that encircles the island we took to beach-combing along the shore  and hiking in the ecological park, our eyes forever drawn to the grey mantle over the sea.