Ludlow’s church can be seen from miles around due to its large tower. The original church was started in 1199 and added to in the fourteenth century with a decorated hexagonal porch. The chancel and the nave were built in the perpendicular style in the early 15th century.  It was one of only 18 churches given a five-star rating in England’s Thousand Greatest Churches by Simon Jenkins (1999) and is described as the “Cathedral of the Marches”

An important body in the town was the Palmers’ Guild which began around 1250 as a mutual benefit society, but later concerns were with provision for the after-life. By using the name Palmer, the Guild associated itself with pilgrimage to the Holy Land and a window in the Guild’s own chapel of St John the Evangelist depicts a legend that attributes the foundations of the Guild to Edward the Confessor. The town’s economy and medieval prosperity came from  wool.

I have been promising to show more images of the interior so let’s have a look around and you will see why I find this building so beautiful and how it connects the present town of Ludlow to its historical political importance (Wars of the Roses) and economical past.

Five hundred years ago the church would have looked very different inside. Instead of bare stone the walls would have been brightly painted, but only a small portion of barley-twist striped paint can be seen on the column near the lectern. And there were no pews then, people stood in the Nave for services. About 450 years ago all chapels in churches had to be removed and the wall-paintings white-washed over. In some churches statues and windows were broken.

I have a separate post about some of the wonderful windows inside this building, but I shall do another more detailed post on them, plus the historic misericords that exist in the chancel. Some are from the late fourteenth century, but most around 1447. 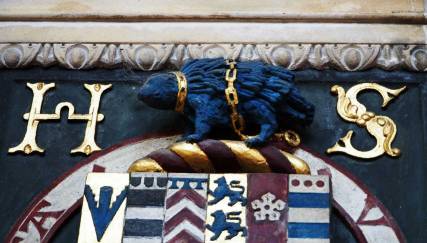 Angel figures on the Chancel ceiling holding verses from the Bible 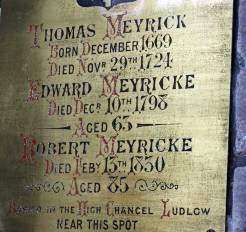 There are now three chapels. St John’s, where the entrance to the tower can be found and also the beautiful Palmers’ window telling the story of their pilgrimage to Jerusalem;

Lady Chapel (named after Mary, mother of Jesus with a marvellous Jesse Window) has beautiful tiles on the floor and was once used as a school. You can still see carvings on the desks done by the pupils;

and St Catherine’s Chapel where there is a flag from the HMS Ludlow named after Ludlow in Shropshire and Ludlow in the USA. The monument here is unusual as the lady is carved on her side. The chapel was used for meetings by two of Ludlow’s craft guilds: the Weavers and the Shoemakers.

The Chancel is the most beautifully decorated part of the church and because it was the most important part many people wanted to be buried here. 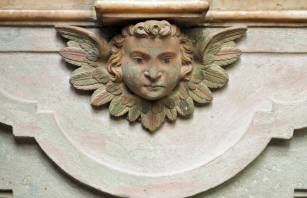 The large coloured tomb by the altar table is that of Sir Robert Townshend and his wife Dame Alice. They died in the reign of Elizabeth I and the tomb is surrounded by small figures of all their children.

Tomb of Robert Townshend and his wife

The small figures around the tomb are their children 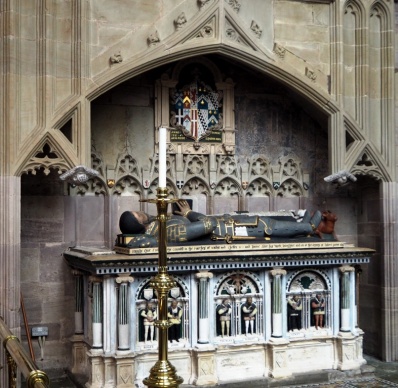 Tomb of Robert Townshend and his wife

An unusual addition on my recent visit was this beautiful example of a Medieval Organ built by organ builders Goetze and Gwynn for the medieval church of St Teilo, being reconstructed as it was c.1520 in St Fagan’s National History Museum Wales. The new organ shows some influence from the Old Radnor case, reflecting a Welsh character; the pipework was modelled on the earliest West Country survivals from the mid 17th century (source: Bangor University Religion & Society) 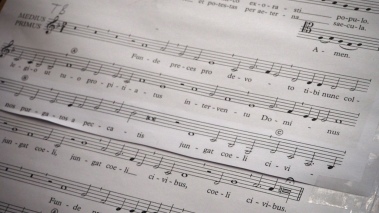 36 thoughts on “The Parish Church of St Laurence, Ludlow”