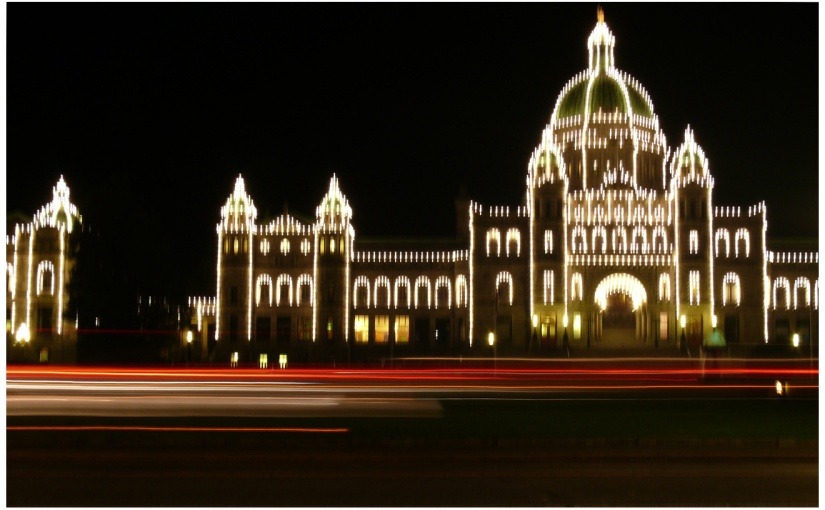 Like many other photographers out there I am not so good on the night shots, mainly because I don’t always carry a tripod and to be honest, unless you can find something to rest your camera on to keep it ultra steady, night shots without one are usually only fit for the recycle bin.

Saying that, I have attempted a few during Lisa’s ‘One Day, One World’ project and had some limited success with the fireworks. And I posted a few from San Diego on my old Postcards blog that were OK.

But these are from Victoria, BC, where I just had to capture that fabulous Legislative Building lit up by over 3,000 bulbs (how do you fancy changing those light-bulbs?) and a few other colourful scenes around the Inner Harbour. 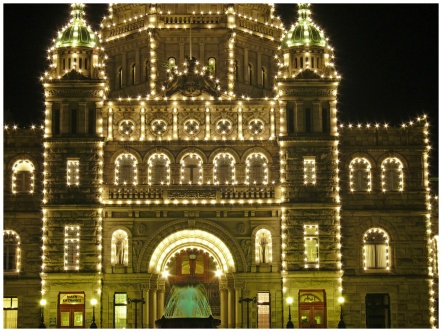 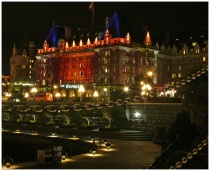 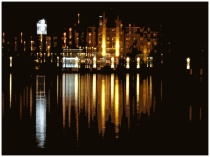 The header photo is an example where lights at night become blurred – I love the car headlights and rear lights forming that stream of colour, but the building bulbs ought to have been sharp.  Oh, well, I shall have to keep on practising these sorts of shots. And take the tripod with me! 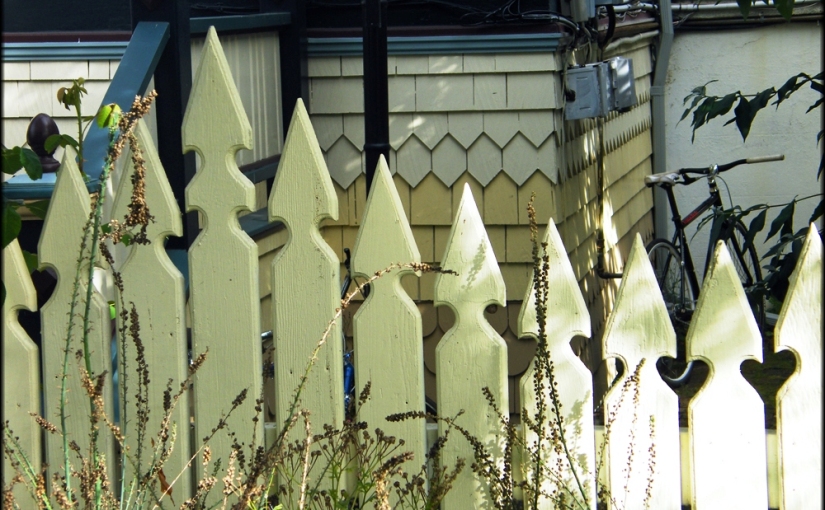 Cutting back through the park we arrived at Fairfield and Cook Street Village. Fairfield is a picturesque neighbourhood with tree-lined streets and you can take a self-guided walking tour which describes some of the buildings of interest along the route. Housing styles typical to the area are Edwardian Vernacular Arts & Crafts (1904 – 1914) British Arts & Crafts (1905 – 1930), Foursquare (1900 – 1920) and Californian Bungalow (1900 – 1929). Needless to say this occupied a good deal of our day, though we found time to browse in a couple of second-hand book stores (always a dangerous pastime) and have a bowl of soup in a cute retro American Diner complete with pictures of Betty Boop. END_OF_DOCUMENT_TOKEN_TO_BE_REPLACED

Victoria has a selection of self-guided walks around the city, available from the Tourist Information Office on the Waterfront, they are a good way to explore the city at your own pace.

After our hour or so of culture we needed some exercise so made our way via Thunderbird Park and the totem poles through to Beacon Hill Park, spotting a great blue heron at the top of a tree near the lake and several peacocks –we couldn’t persuade a single one to open its tail, but managed to get pretty close – before arriving at the lookout where you have wonderful views (on a clear day) across the Juan de Fuca Straits.

We shared a bench with an elderly gentleman – yes, even older than us – who proceeded to entertain us with stories of the area and of the people who once lived here such as the fact that the seemingly random rocks on the hill were in fact burial markers and it wasn’t until a load of them had been moved that this fact came to light – too late then to put them back where they belonged.

Aboriginal burial cairns were often located on prominent hillsides and above defensive sites. Beacon Hill fits that pattern. Finlayson Point, directly below the hill, was the location of a small native village and defensive site. The presence of human graves on Beacon Hill and evidence found at the Point–including house remains, a defensive trench and midden contents indicates the village was “a more permanent settlement rather than a short-term camp.” “People lived in a village on Finlayson Point beginning about 800 or 900 years before the founding of Fort Victoria.” (Grant Keddie, Curator of Archaeology at the Royal B. C. Museum)

I love it when we meet people like him who have so many tales to tell, it’s a shame it happens less frequently when you travel as a couple. 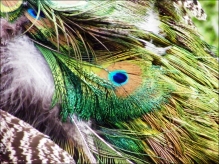 The following day we were passing by the legislative building and thought we’d pop inside to have a look; we were just in time to attach ourselves onto a free tour (every hour) and learn something about the history and government of BC.

The tour is worth doing (but probably better if not accompanied by a toddler who was with his rather indulgent father who allowed the kid to run around and make a lot of noise – I don’t think I was the only one getting hot under the collar and it is a shame that the guide didn’t have a quiet word with him) if only to get a look at the beautiful decoration inside the building. It was designed by Francis Rattenbury, then aged only 25 and fresh from England who, in 1892, blagged his way into winning his first major commission. END_OF_DOCUMENT_TOKEN_TO_BE_REPLACED

On this our second visit to the island we wanted to stay in the city (previously we stayed out at Sooke which is south-west of the city) so we booked the Great Western Inner Harbour as it is within walking distance of the inner harbour, downtown and the southern suburbs. We only realised shortly before leaving the UK that the Island marathon was being run on the Sunday (the day of our departure) and our hotel was slap bang in the centre of the start and finish places so all the roads surrounding us would be blocked! It was also Thanksgiving in Canada that weekend too which probably explained why we had such difficulty booking any B&Bs during this period. (I apologise to all Canadians as up until this time I didn’t even know you guys celebrated Thanksgiving!) END_OF_DOCUMENT_TOKEN_TO_BE_REPLACED